International Marxist Tendency
Share
Tweet
On Sunday, July 7, a meeting was held between members of the national leadership of the PSUV and the Revolutionary Marxist Current (CMR) together with Alan Woods. The Marxists outlined their perspectives and explained the measures that need to be taken to complete the revolution and warned against the danger signals that emerge from the situation in the country.

On Sunday, July 7, a meeting took place in the PSUV headquarters in Maripérez, with the participation of members of the national leadership of the United Socialist Party of Venezuela, including Vanessa Davies, María León, Ana Elisa Osorio and Noelí Pocaterra. Also present were regional PSUV leaders such as Lídice Navas and members of the leadership of the Revolutionary Marxist Current (CMR), Pablo Cormenzana, Euler Calzadilla, Francisco Rivero, Carlos Casanova, Nelson Rodríguez, Jorge Paredes, Leonardo Badell and also comrade Alan Woods. 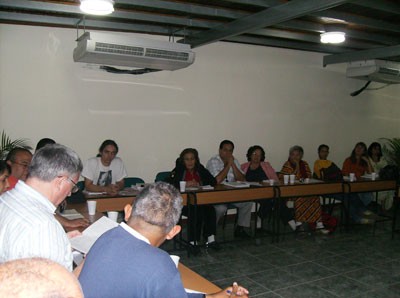 Alan opened the meeting with a speech on World Perspectives and on the contradictions of the Bolivarian revolution. He also explained the work of the international Hands Off Venezuela campaign and drew up a balance sheet of the conversation he had with president Chávez on Margarita Island. "The president is someone who listens, and this is very important, he is a man whose views have evolved", he said.

Alan went into the question of the November elections, pointing out that there is a deep malaise within the ranks of the Bolivarian movement, which can be felt in every neighbourhood and in every city. He gave several examples to illustrate the fact that this malaise is not directed against socialism, nor against the revolution, nor against Chávez, but the people are dissatisfied with many of the governors, mayors, councillors, deputies and Ministers. "Revolution is a serious business, one cannot play with the feelings of the masses. I have studied many revolutions and I do not know of any that has lasted for 10 years," said Alan. He reported a conversation he had had with a taxi driver who said he was a chavista, but added that in the November elections "the people will make them pay". 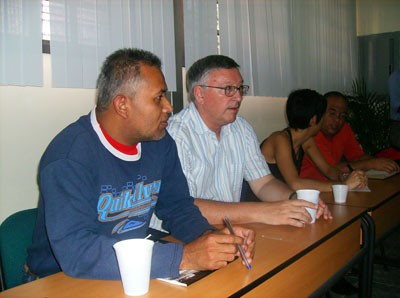 Alan also dealt with the question of the consciousness of the masses, criticizing the argument of the reformists when they talk of a so-called "low level of consciousness of the masses", replying that this is a foolish idea, since "the masses have saved the revolution, not once but on many occasions". He also explained how he considered that there was great support for the ideas of Marxism in all the meetings he had spoken at in different states around the country. Workers from Sidor, Venalum, from the car industry, oil workers, metal workers, from the occupied factories, students, peasants and also delegates, spokespersons, commissioners and rank and file members of the PSUV who had attended the meetings, were all very enthusiastic and keen to learn more, as could be seen in the attendance at the meetings and the sales of Marxist literature, particularly of the book that was being launched "Reformism or Revolution. Marxist and Socialism of the 21st Century".

Alan explained how during a previous visit he attended a meeting at which Chávez spoke about socialism, and while some of the ministers and bureaucrats clapped without enthusiasm, the rank and file gave him an enthusiastic standing ovation in support of socialism. But then "Chávez's advisors and the reformists quickly came out saying: ‘yes, we are for socialism, but it must be socialism of the 21st Century'. Socialism of the 21st Century has a great advantage: nobody knows what it is! It is like an empty bottle that can be filled with any content, and this is what the reformists are doing." 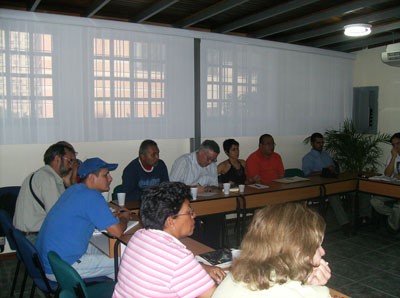 Alan explained that the reformists always have arguments to stop the revolution, arguing that there are no conditions for socialism. "Reformism during the period of the post-war boom was able to afford certain concessions to the working class, through certain reforms. But in the current situation, reformist governments everywhere are cutting living standards and the democratic rights won by the working class."

He also explained that the so-called "realism" of the reformists brought us the coup and the oil sabotage, emphasizing that one cannot make half a revolution and how the constitutional reform referendum was a first indication of the tiredness of the masses, which was a real danger.

Alan Woods stressed that every time that the president has made an appeal to the ruling class to dialogue, the conclusion they have drawn is "this is a weak government", and weakness invites aggression. "What would the ruling class do if they came to power?", asked Alan. "Do you think they would respect the laws and the Constitution?" To which he replied, quoting from the old Greek philosopher who said that "the law is like a spider's web, the small get caught in it while the big tear it apart". Alan Woods also referred to the ideas of Haiman El Troudi, currently the Minister of Planning. "How can there be a Ministry of Planning? You cannot plan what you don't control, and you don't control what you don't own". Alan ended by explaining to the PSUV leaders that unless the Bolivarian revolution expropriated the oligarchy, the oligarchy would make sure that the Venezuelan working class would not rise again for 50 years. 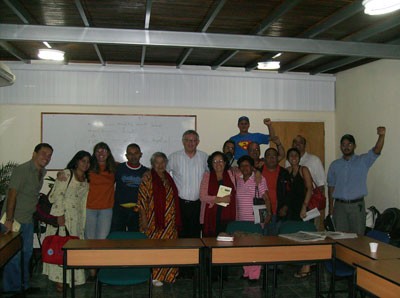 Alan's speech was followed by a lively debate. Some of those present confirmed that the revolutionary rank and file is very disappointed with the policies of some of the mayors and that the right wing is taking advantage of that. Amongst those who spoke were Jorge Paredes and Nelson Rodriguez, both members of the leadership of the CMR and of the factory council of Inveval, the factory which is being run under workers' control. They explained the situation in Inveval and all the problems they were facing to get raw materials. The conclusion was that the means of production as a whole had to be nationalized in order to allow for democratic planning of the economy, they said. Women's Affairs Minister, María León, spoke of her experience as a revolutionary activist and stressed the need to build a strong trade union movement and the role that the Socialist Party should play in that.

One of the most important questions came from Vanessa Davies who said: "Very well, we nationalize the banks, the companies and the industries, but what would happen with bureaucracy and corruption?"

Alan replied that currently the bureaucracy is acting as a fifth column within the state apparatus. He explained how the state is still a capitalist state and how it should be abolished and replaced by a state under the control of the workers, the peasants and the people. He quoted the four conditions for such a state, which Lenin drew from the experience of the Paris Commune:

Alan also stressed that as Marx had said, "social being determines consciousness. Obviously if an official earns millions of Bolivars he will behave like a capitalist." He also said that much confusion has been introduced in relation to Lenin's position on class collaboration, but that in fact the Russian revolutionary argued precisely against any confidence in the capitalists.

Without a doubt, this meeting between the CMR and leading members of the PSUV was a very important one in which a frank exchange of ideas took place.