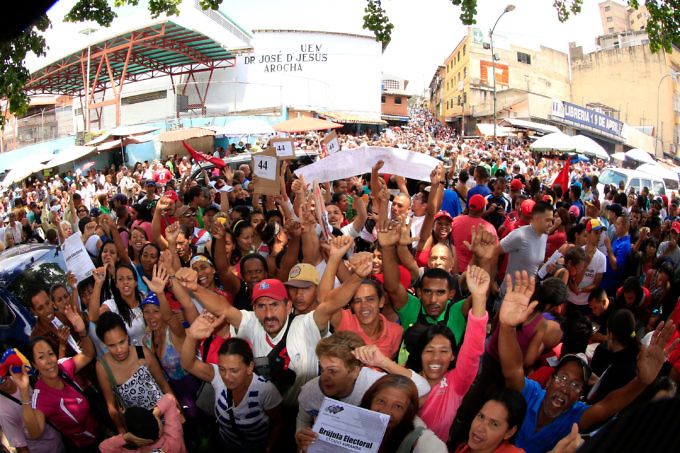 Venezuela’s reactionary opposition had put all their weight behind a “consultation” which was supposed to show that an overwhelming majority of Venezuelans not only reject Maduro’s proposed Constituent Assembly, but also want the Army to intervene and the formation of a “national unity government”. Their mobilisation on the day was sizeable, but fell far short of their own expectations. The real news was the massive turnout, on the same day, for the official dry run of the Constituent Assembly elections, which was a show of strength for Chavismo

Let’s start with the opposition’s “consultation” which had been previously described as a referendum and a plebiscite and which, despite being called by the opposition-dominated National Assembly, had no legal status and no real guarantees. Much has been made by the international media of the fact that this consultation was organised “against the wishes of the regime”, but in reality, the government made no attempt to stop the consultation from taking place and it also had the logistical support of the opposition mayors and regional governors, as well as the National Assembly and the backing of the capitalist class.

Five right-wing former Presidents of different Latin American countries (all of them involved in corruption scandals and having used brutal repression against workers and peasants in their own countries) were allowed to observe the proceedings and made incendiary speeches at the end of the day, demanding Maduro should “heed the expressed will of the people and go”.

The opposition was able to mobilise large numbers of people. This was never in dispute. Even in some Chavista leaning areas of the capital there were queues in their polling stations, such as in El Valle, Antimano and Catia, for instance. However, this should be taken with a pinch of salt. In Catia for instance (Parroquia Sucre of Libertador council), in 2013 the electoral register contained over 290,000 people, of which 39% (91,000) voted for the opposition see link. Yesterday, the opposition had one polling station for their consultation in this area. Of course, if you attempt to get over 90,000 people into one polling station over 9 hours, you will get a long queue!

As we have explained before, the opposition consultation had no guarantees whatsoever, as was admitted by opposition leaders themselves, who admitted that people could vote more than once but they were appealing to their “moral conscience” not to do so! There is already a video showing a person who voted three times in one hour in the right-wing stronghold of Chacao

Furthermore, as announced, at the end of the day they burnt the ballots and the registers, allegedly in order to protect people from repression, but in fact guaranteeing that whatever results they announced no one will ever be able to check and audit them. So much for an opposition which has been accusing the Bolivarian revolution of election fraud for the last 15 years!

What was remarkable, however, was the mobilisation of the Chavista rank and file for the dry run of the Constituent Assembly elections. In fact, both the government and the Chavista masses considered this not so much as a trial run in order to see how the process works, but rather as a show of strength, an opportunity to show the reactionary opposition, which has been involved in violent rioting and terrorist actions for over 100 days, that they fundamentally reject their attempt to overthrow the government.

The queues outside the official National Electoral Council polling stations were massive throughout the country, even in big cities where the opposition is very strong, in some of which it controls the local council and regional governors and has been constantly on the streets for over three months, such as Barquisimeto, Valencia, Mérida, etc. In many cases, as in Catia la Mar (Vargas), in Maracaibo (Zulia), in some Caracas neighbourhoods such as El Valle or Lídice, the queues were so long that the polling stations instead of closing at 4pm as scheduled, remained open until 8pm. Particularly significant was the turnout in Petare, a parish which has voted for the opposition in recent elections see video (below). We have heard reports from Merida of many people who queued for hours and finally went home without participating in the dry run.

It is important to stress this point for two reasons. The first is that the international media either completely ignored the official dry run process or lied deliberately to say that turnout had been very poor. For instance, the Spanish El País said: “This newspaper was able to verify in a tour of Caracas the little influx to some polling stations that hosted the dry run convened the same day by Chavismo for the vote of the Constituent Assembly. There were premises that looked empty, despite the efforts of the state media to show an avalanche of participants that was not such.” We do not know where Alfredo Meza, the paper’s correspondent, got his information from, but this is not a true report of what actually happened. We know because in the picture gallery published by El Pais they actually published four pictures of very long Chavista queues for the dry run, but they said in the caption that they were Chavistas “queueing to participate in the opposition consultation”!

Alba Ciudad and AVN have published two picture galleries, including images from different parts of the country, which provide a glimpse of the turnout at the official Constituent Assembly dry run. Here are a couple taken by comrades in Antimano, Caracas:

For an indication of the mood see for instance this video (below) , shot in La Vega, Caracas, by Zurda Konducta conductor Oswaldo Rivero. We doubt very much that Alfredo Meza has ever been to La Vega, but, unfortunately for the opposition, there is more to Caracas than just Altamira.

The second reason why this Chavista mobilisation is important is because it reveals that there is a healthy reaction on the part of many in the Chavista ranks amongst the workers and poor who, despite all economic difficulties, know that if the right wing comes to power they will be made to pay. It is a very healthy class instinct which is fuelled by anger at the situation they have had to live through over the last three months of constant opposition violence and road blockades carried out by small numbers of people holding them to ransom, and the lynch mob atmosphere against Chavistas which the opposition has created.

Clearly the opposition did not expect this and they were unsettled. It took them hours to announce the results. In a clear demonstration of splits and divisions between their different factions, before the results were announced, different individual opposition figures were already analysing them.

So, what was the “result” of the opposition consultation? They officially declared that 7,186,170 people had participated. Let’s assume for a moment that the figure is true. That would fall short of the 14 million they themselves had announced would take part, just days before July 16, and also short of the more conservative figure announced by Capriles as a litmus test for the day. The opposition also announced that “with this result Maduro would have lost a recall referendum”, referring to the Constitution that states for a recall referendum to be binding on the sitting President, more people would have to vote for his recall than he actually won in the election. Unfortunately for the opposition, Maduro was elected with 7,587,579 votes in 2013, and so would not have been recalled with these figures. Not only that, but the figure they plucked out of thin air is in fact less even than the opposition candidate won in that presidential election, which was 7,363,980.

But let’s examine the plausibility of the announced “result”. According to the opposition, they had 2,000 polling stations with a total of 14,000 polling booths, which remained open for 9 hours, from 7am until 4pm. Some of them remained opened later, but many were already done much earlier. Let's calculate: 7,186,170 votes /14000 booths/9 hours = 57 votes per hour per booth = 1 vote every one minute and 5 seconds in each of the polling booths for 9 hours non stop!!! In that one minute and 5 seconds every voter had to go to the table, show their identification documents, have their details written down in the electoral register, receive their ballot paper, go into the booth and fill it in, fold it and put it in the ballot box. This would be a massive achievement for the opposition, one which breaks all election records and a few laws of physics as well.

Just to give an example: in Spain there are 63,000 Venezuelans according to the census taken on January 2017. Of these 9,000 are below the voting age, leaving 54,000. The opposition claims that 91,981 participated in the consultation. Now, there may be some discrepancies between the census and the real figures, but nearly 38,000 more than are actually registered officially? We can at least be justified in having some serious doubts about these figures.

We can therefore say that the opposition “referendum” backfired. At the time of writing, the opposition leaders have not yet come out to say what are the next steps they intend to take. Their rhetoric before July 16 was fiery. The consultation was to be the “zero hour” for a national uprising and the removal of the government before the July 30 Constituent Assembly elections. They might still try that, but now it looks less likely that they will achieve any such thing. Of course they will not stop trying. Both Spain and the US are already mulling over the idea of sanctions against Venezuela (perhaps targeted at selected officials) “if the Constituent Assembly goes ahead”.

The main underlying problems, however, still remain: a deep economic crisis, the depletion of foreign reserves (now under the US$10bn mark for the first time), very high inflation, a rapid devaluation of the currency, all of which combine to wear down the social base of the Bolivarian revolution.

The government, in a weak position, continues with its policy of class conciliation, which in turn, combined with widespread corruption of high officials and bureaucratism in the way the movement is run, is depleting and demoralising the Chavista rank and file. Faced with all these difficulties, the Bolivarian leadership instead of basing itself on the revolutionary activity of the masses to strike blows against reaction, is relying on the state forces and is appealing for peace and dialogue. The level of independent revolutionary mobilisation of the Chavista left has been very weak and mostly concentrated in rural areas.

The outcome of the July 16 “consultation” in the immediate period ahead will probably have the effect of weakening the the counter-revolutionary offensive, but unless the fundamental problems are addressed, this will only be temporary.