Share
Tweet
On Saturday, February 4, a truly gigantic demonstration in support of the Bolivarian Revolution marched through Caracas. The march was at least 12 kilometres long and revealed that the revolutionary élan of the masses is still alive and kicking. Chavez called for the arming of the people to face up to the danger of imperialist intervention. The coming year will be a crucial one if the revolution is to go forward and be completed. 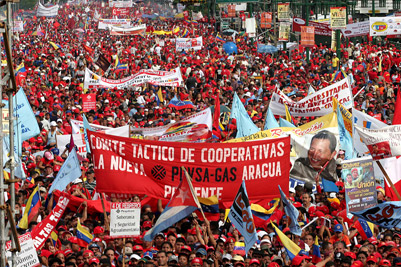 Saturday, February 4 marked the 14th anniversary of the 1992 coup headed by the then army officer Hugo Chavez Frias against the murderous and corrupt government of Carlos Andrés Pérez, the IV Republic and the Punto Fijo agreement as well as the 7th anniversary of the Bolivarian Revolution.

A truly gigantic demonstration took place to celebrate the event, covering the 12 kilometres that separate La Cota Mil, in the eastern part of Caracas, to the Avenida Bolivar. Hundreds of thousands of people, from all over Venezuela, marched in an atmosphere of enthusiasm and revolutionary joy. On the demonstration you could see whole families with their small children, a multitude of young people with their red t-shirts and caps and with banners in favour of socialism in Venezuela.

The most popular T-shirts were those carrying the slogan “Go for the 10 million”, the target that president Chavez has set for the upcoming presidential elections that will take place on December 3 of this year. All this fused into one red tide, accompanied by the music of the revolutionary singer Ali Primera, and gave a feeling of strength and optimism. Chanting “¡Viva Chávez!” and “¡Uh!, ¡Ah! ¡Chávez no se va!”, the Venezuelan people returned to the streets once more to celebrate the anniversary and to defend the revolution against the counter-revolution and imperialist aggression. Thus the masses clearly demonstrated that they maintain their vigilance and militant energy.

This demonstration was the best answer the masses could give to the campaign of US imperialism against the Bolivarian Revolution. The expulsion of the Venezuelan diplomat Jenny Figueredo, on Friday February 3, in response to the expulsion of the Naval attaché of the US Embassy, John Correa, accused of espionage, was the latest act of aggression of imperialism. Correa was gathering and obtaining secret information from officers within the Venezuelan armed forces and conspiring against the government of president Chavez. 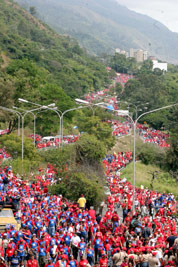 After the expulsion of Correa, the reactionary clique in Washington wasted no time in responding. The US Secretary of Defence Rumsfeld compared Chavez to Hitler. Other high positioned functionaries in the US administration adopted the same line, in an attempt to criminalise the Venezuelan government.

The demonstration that started at 9.00 in the morning marched to the Avenida Bolivar. A graphic expression of the tremendous success of this march was the fact that at 4.00 in the afternoon, with the Avenida Bolivar already packed full, there were still people marching from Cota mil.

The international press has tried to underestimate its success. For example the Spanish daily “El Pais”, known for its support for the April 2002 coup and its hostile attitude towards the Bolivarian Revolution, in its Sunday edition argued that only “tens of thousands” of people took part in the Bolivarian march, while “thousands” went on that of the opposition. This is yet another manipulation on the part “El Pais”. The truth is that the Opposition’s demonstration was miniscule. There were around 2000 to 3000 people on it, compared to the hundreds of thousands on the Bolivarian demonstration.

At the end of the demonstration, president Chavez spoke to the participants. In his four-hour speech, he denounced the tactics of US imperialism which is trying to prevent his re-election, by spreading the idea that his governing of the country is not working. He called upon everyone to remain alert and not to let the media succeed in their campaign against his re-election. In the same way, he appealed to the masses to struggle against bureaucracy, inefficiency and corruption.

He warned US imperialism that if they try to attack Venezuela he would “make them bite the dust” and he would close all Venezuelan refineries that are on North American soil. “If the US government wants to break all relations, that is up to them. For my part, it won’t cost me anything to close the refineries. Then we will see how high the price of oil will reach. We do not want it to come to that, we want them to leave us in peace. Imperialism must accept the truth, that Venezuela will not be a colony of the United States. We govern ourselves”. 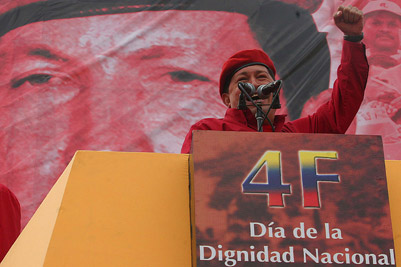 At the same time he proposed to accelerate the formation of a military reserve to better defend the country. He re-iterated the point that the purchase of 100,000 rifles is not enough to face up to the threat of US imperialism. He has put forward a proposal to the National Assembly to buy more arms and distribute them among the people. “Because the gringos want us to remain unarmed. Well no! I will accelerate the process of integration of the national reserve together with the territorial guard, we need more guns. Venezuela needs one million well equipped men and women”.

To meet the challenge of the presidential elections in December and reach the target of 10 million votes, he issued an appeal for a second Battle of Santa Inés. With this aim in mind, he made an appeal to the rank and file of the Bolivarian Movement to organise once more the UBEs (Unidades de Batalla Electoral, Electoral Battle Units), in the same way as was done during the August 15, 2004 referendum campaign.

This march represents a new turning point in the revolution. It clearly demonstrates the enormously favourable correlation of forces in favour of the masses, for the socialist transformation of society, and the level of consciousness and revolutionary instinct. This year will be a decisive one: only through the organisation and mobilisation of the working class, the urban poor, the peasants and the youth, can the re-election of Chavez be assured.

The Bolivarian movement must use the organisation of the people into UBEs, not only to guarantee the victory of Chavez, but also to put an end to capitalism itself. With this aim in mind, it must push from below for the expropriation of the commanding heights of the economy (banks, industries and landed estates) under the control of the workers and the local communities. This is necessary in order to break the economic stranglehold of the counter-revolution and imperialism and to fight the economic capitalist sabotage that will increase during this election year.

At the same time, this will only be possible if the bourgeois state apparatus inherited from the Fourth Republic - and that is still present within the Fifth - which is the main centre of corruption and bureaucratism disappears and is substituted by a state based on rank-and file assemblies made up of elected and recallable delegates, coordinated throughout the country. That is to say, that only by completing the revolution by moving to socialism, can the revolution be defended against the conspiracies of imperialism and also guarantee the overwhelming victory of president Chavez on December 3.

To see more pictures of the demonstration, go the picture gallery at the website of Agencia Bolivariana de Noticias.