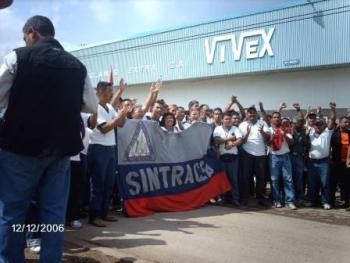 We publish here an interview with Yeant Sabino, general secretary of Sutra-Vivex. He explains how the workers occupied Vivex, a plant which produces windscreens for the car industry, and how they are organising themselves through committees. The workers are demanding of President Chavez that he should nationalise their factory.

El Militante: When did you start the struggle, how did you get the idea to occupy the factory?

Yeant Sabino: If you go back, we should remember that already in 2006 we took over the factory. That was a strike in which the workers united to get the reinstatement of a number of trade union representatives who had been sacked a few years earlier. 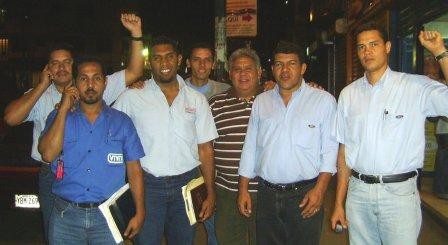 This year the company attempted to use similar tactics of intimidation and of attacking the workers. On November 20th they called the union to a meeting to inform us they did not have enough money to pay the utilidades (bonus pay) in full, and the company had losses of more than BsF 8 million.

It was at this time that we held a mass meeting of the workforce and decided to take over the factory. The aim was not just to get satisfaction for our demands, but also to take over the factory and start producing ourselves. We had had a number of discussions already and thought it was time to show the company the degree to which we had managed to organise ourselves.

It took us several months of discussions with the workers, explaining what workers' control is, explaining the plans of the bosses. In one way or another, this helped us achieve a bigger degree of workers' unity.

It was an impressive meeting. There were workers who had never participated in a mass meeting before, but we used the provocation of the company to explain clearly that the bosses are no friends of the workers. Today we have been occupying the factory for 14 days. We are no longer producing because we ran out of parts and materials.

El Militante: Tell us about the demonstration in Barcelona.

Yeant Sabino: Yes, yesterday, Tuesday, 140 workers held a peaceful march for several kilometres. It was a workers' march, with slogans of struggle, slogans of solidarity and support, and slogans against the killing of the comrades that were assassinated in Aragua recently.

Workers marched from the plant, through the service road on Avenida Raul Leoni, in Barcelona, to the Town Hall of Bolivar council. There, the recently elected PSUV mayor met with us together with a three-person commission, which was sympathetic to us. Then we went to the regional assembly where a number of regional deputies met us and ended up in the Anzoategui governorship building.

We must underline that one of the commitments of the Bolivar council mayor was to go to the premises of the company on the same day, yesterday. There we had a meeting between the workers and the mayor, explaining our proposals and asking for solidarity and support, which she agreed to.

The demonstration yesterday, the energy we had, the spirit of struggle, was partly the result of the statement of the president [Chavez] on December 1st, when he said that any company that is closed down, which does not want to pay its workers, where workers' rights are being trampled upon, and those companies that want to declare bankruptcy without a justified cause, should be taken over and intervened by the State. Despite the fact that we took over the factory on November 20th, and the president made his statement on December 1st, the truth is that the president had already made similar appeals in the past, but unfortunately there had been no-one in the leadership of the trade union movement to take that up and promote factory occupations.

Today, Wednesday, December 3rd, we were granted the right to speak at the national assembly and the deputies discussed how to get raw materials to Vivex, so that we don't paralyse production and also the issue of finding a market for the windscreens.

El Militante: You also participated in the meeting of the negotiation table of the auto industry sector at the Ministry of Labour. What is the current situation of that sector?

Yeant Sabino: Yes, today the talks of the auto sector restarted, without any concrete result, despite the fact that the vice minister of labour was present. These discussions have been taken place over 9 meetings in the last 8 months.

What we wanted to discuss was not the important problems of health and safety (which was the immediate reason for the meeting) but rather the conflict which is developing in the car industry, which is a very sharp conflict. We know that this is not only about Vivex. There are other companies in the auto sector facing similar situations. We could mention the case of Oximetal, an auto parts company which makes bodies for the assembly plants. Here the company also says it is in the red, and the situation is similar in other companies.

El Militante: How are you organising yourselves at Vivex?

Yeant Sabino: At Vivex we are showing how the organisation of conscious workers can take up any challenge. We are organising ourselves through committees, we have reactivated the delegates to the UNTSCA [National Union of Workers in the Body and Auto Parts Sector], we have reorganised the discipline committee, we have created a women's committee and we have organised shifts to stay inside the plant to look after the machines and tools.

What we want to stress as well is that we have gone from the immediate demands to something more collective, more social: workers' control. Despite the fact that we have little experience in this field we are convinced that the factory, run by the workers through collective decisions taken in mass meetings can carry out work in an effective way, not only for the workers themselves, but also outside the factory, where we have the support of the representatives of the communal councils.

There are propaganda committees, which we have sent out to cover the whole of Barcelona, with leaflets, flyers, statements. We have also used car-mounted loudspeakers. We are making an appeal to the communal councils, the students, the peasants and all social and political organisations to unite to our struggle, to help us in whatever way they can, with moral or material support. We want to transform the company from a private enterprise to a social, collective one.

El Militante: What is your appeal to the rest of the trade union movement? How do you think this struggle can strengthen the revolution?

Yeant Sabino: We make an appeal for unity, because we think this is the most important point to make to all trade union organisations from different industries. We have an historic role to play and for this reason we must have unity - regardless of the different tendencies. This is not about personalities. This is not about one leader being above another. At this moment in time, unity is paramount to achieve the aims that we have set ourselves.

I have always told the workers that we have to trust in our own forces. Because many say: "well, the mayor, the governor, maybe the president" and I always reply that above all is the rank and file. We are going to determine the path that we want.

We are struggling against an oligarch, a fascist who for years has been exploiting the working class. But now we have a real democratic organisation with the participation of the workers, and we have started to fight for our wages and conditions, challenging him in the factory and he is no longer able to control us.

For instance, one of many strategies of the boss was to prevent us from voting on November 23rd. This was a crazy idea. We have around 400 heads of family, maybe 1000 votes in total. But the attempts of the boss were in vain, because the workers, as we had decided, went to vote. We, the workers, must defend this revolutionary process which the president has been promoting. We have many experiences. In other historical times this factory occupation would not have taken place. Today the workers take over factories and put them to production with the help of the revolutionary process. In previous times we would have been subject to repression and maybe even killed.

We have also asked the CMR (Revolutionary Marxist Current) for solidarity, because this is an organisation which has helped us for some time, in relation to the ideology that we must use within the workplaces. This is very necessary. Some workers are asking me: "Where are the CMR comrades?" I would say it has been partly because of our experience with the CMR that we have been able to explain to the workers the role that we play in the factory. As Alan Woods said: "not a light bulb shines without the working class".