The first results that have been issued of yesterday's local elections in Venezuela confirm that there is still widespread support for the Revolution, but in some areas tiredness is setting in and the Opposition, in spite of losing around 300,000 votes, has taken advantage of this. This is due to the delay in the revolution. The only conclusion revolutionaries can draw is that it is time to complete the revolution once and for all.

Just past midnight on November 24, the Venezuelan CNE, National Electoral Commission, announced the first results of the elections for local mayors and state governors. From these figures it emerges that the forces of the revolution lost the elections in some important states. However, it is important to note, that 5.6 million people voted for the PSUV. This is an increase of more than one million votes on the December 2007 constitutional referendum result. On the other hand, only around 4 million voted for the opposition candidates. This means that the right-wing opposition actually lost more than 300,000 votes. This reveals the real balance of forces. 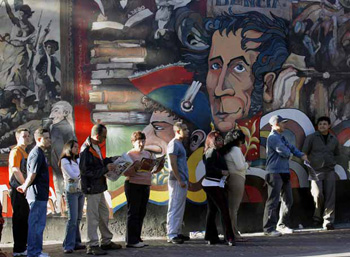 While the PSUV (United Socialist Party of Venezuela) won in 17 states, the opposition won in 5 (one state was not electing its governor in these elections). In the previous local and regional elections (in 2004), the opposition only managed to win two governorships - in the states of Zulia and Nueva Esparta. This time the opposition managed to add to this the states of Miranda, Carabobo, Táchira and the important Alcaldía Mayor of Caracas (the Greater Caracas council). While the final results for Carabobo and Táchira have not yet been announced, the preliminary count gives the opposition a majority there.

Although it should be emphasized that the PSUV won back three states (Sucre, Aragua and Guarico) from those governors who formed part of PODEMOS and had betrayed the revolution, this cannot make up for the loss of important states such as the ones mentioned above. Especially the loss of the crucially important Alcaldia Mayor of Caracas is an important setback and the opposition will use it as a base for building its support.

The importance of the elections

These were by no means "normal" elections. Everybody understood that they would have a decisive impact on the future of the revolution as a whole. From the outset the international bourgeoisie understood this very well. As the Spanish right-wing daily paper ABC put it; "Chavez faces elections in which the ‘future of the Bolivarian Revolution' is at stake." Other media tried to present a picture of chaos and uncertainty, distorting and exaggerating some of Chavez's previous statements. This is typical of the attitude of the bourgeois press whose sole intention is to discredit the Bolivarian government and prepare for its future downfall. 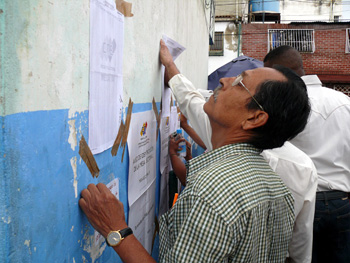 As we have reported earlier on, the threat of some kind of military coup is still present. In previous months various conspiracies were discovered by the Venezuelan authorities, involving both former and active high-ranking officers in the Armed Forces. In this context, the CICPC, a special attachment of the intelligence service, declared a state of alarm in 6 states, Tujillo, Lara, Portuguesa, Zulia, Bolívar and Carabobo, where intelligence reports had indicated the possibility of Opposition attempts to disturb the electoral process with violent means. During the Election Day itself 88 people were arrested for carrying arms illegally or disturbing by any means the electoral process.

In spite of this, there was a high turnout. Around 65% of the electorate voted, compared to only 45% in the 2004 local elections. Electoral centres were kept open for hours after the official closing time, as hundreds were still queuing up to cast their votes (something which the Opposition denounced as "undemocratic").

The root cause of the setback

The bureaucrats within the Bolivarian movement and within the PSUV will undoubtedly blame the masses for this new setback. They will say: "This shows the low level of consciousness, the masses are not mature for Socialism yet. Therefore we have to wait and postpone the building of Socialism". There will be a strong campaign in favour of "moderation" and strong pressure will be put on Chavez to adopt this line. Such a campaign will be a repetition of the one that followed the defeat in the constitutional referendum in December 2007 - but on a far higher scale.

However, there is another side to the situation. The conclusion that many of the more advanced layers drew in December 2007 was that it was precisely this policy (i.e. the policy of moderation) that had led to defeat. They began to rebel against what they saw as a fifth column within the ranks of the Bolivarian movement. This found its expression in the sharp contradictions at the PSUV national congress in February and also at the PSUV Youth Congress in September. 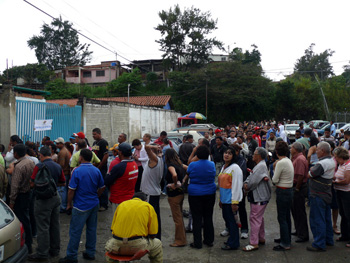 The loss of various states is in fact a continuation of the setback in the December 2007 constitutional reform referendum. The reasons are not very difficult to see. After 10 years of revolution and permanent mobilization, a section of the masses are growing weary of the lack of fundamental change in society. Although progress has been made in the social programmes, the misiones and the barrio adentro health care service, the fundamental problems (housing, jobs, prices) remain unsolved. At the present moment, due to the sabotage of the capitalists, there are food shortages in most of Venezuela, including such basic products as coffee, sugar and beans.

In Caracas food prices have skyrocketed, reaching nearly 50% over the last year. So has the crime-rate, reaching record levels in deaths per capita. The former mayor of the Alcaldía Mayor, Juan Barreto (who is a member of the PSUV), started out by carrying out expropriations of housing, but then retreated and thus proved unable to solve the housing problems of the poor urban masses.

In Miranda, the same problems prevail. Added to this is the fact that the PSUV candidate was Diosdado Cabello, a businessman and the outspoken leader of the "derecha endógena", the homegrown right wing of the government and of the PSUV. As in many other places, this clearly repelled many loyal Supporters-supporters.

The issue of corruption was also crucial in Carabobo, where the former "Bolivarian" governor (Acosta Carles, a military officer) had been shown to be involved in all sorts of murky business deals using his position. He was expelled from the PSUV and replaced by Mario Silva, a popular TV presenter. However, Acosta Carles stood against the PSUV candidate and managed to win enough votes to allow the right-wing candidate in.

These are just a few examples. What they show is that the main reason for the defeat is to be found in the disastrous effects, not of radical policies, but of reformist policies. Reformism has proved incapable of solving the urgent problems of the masses. This is especially true now, when a drastic fall in the oil price will reduce the amount of money available for social programmes.

This new electoral setback will undoubtedly be used by the right wing and the counter-revolutionaries in their campaign to overthrow Chavez and put a halt to the revolution. They achieved what they wanted; advances in some strategic states. From here they will go on to spread their campaign of building mistrust towards the government and criticize it more openly and more radically. They will use the results to mobilize their supporters and encourage them to work actively for the overthrow of Chavez. They will get support from the international bourgeois media which has been hammering home the idea of a weakened and discredited Chavez. 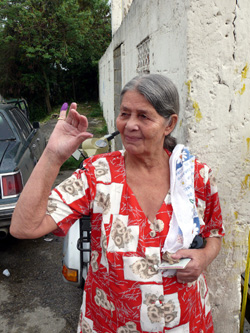 The Opposition may now launch a campaign to collect signatures for a recall referendum (as they did in 2004), which is allowed for in the Venezuelan Constitution. But this time they will probably be even more confident in their own strength and will make use of both legal and illegal methods to try to achieve their aims.

On the other hand, the masses will not remain passive. Frustration over a loss of several strategic positions will turn into anger. The masses will place the responsibility for this defeat on the bureaucracy and the unreliable and cowardly leaders that surround Chavez.

During the campaign Chavez travelled tirelessly from one part of the country to the other, even visiting some states twice. Everywhere he put the maximum effort into the campaign. But the PSUV candidates in many places watered down the political content of the campaign and did not make half the effort of Chavez. Even on election night, the PSUV candidates delivered what was a lame press conference, only to be outdone by Chavez himself shortly afterwards, giving an unannounced press conference himself.

This will have huge consequences within the PSUV, the PSUV Youth and the trade union movement. These organizations will be shaken from top to bottom. Beginning with the advanced layers in the vanguard, the masses will draw conclusions. They will see that the revolution is indeed in danger. They will move all their might to save the revolution - but this time the struggle will also be against the internal enemies of the revolution; the fifth column of bureaucrats infiltrated within the revolutionary movement.

The elections reveal a profound polarisation in Venezuelan society, yes. But this does not mean the end of the revolution. As the above-mentioned figures show, the immense majority still support the revolution and the ideas of socialism, and are ready to move forward. Even on Election Day, wherever the Opposition tried to engineer riots, the people responded by taking to the streets and drove them out. This is the decisive point. In the final analysis, a revolution is not decided in parliament or in elections. A revolution is decided in the struggle between the classes, in the factories, in the universities and in the streets.

The situation is still very favourable for the revolution. Chavez has the support of the great majority of the population. He has an overwhelming majority in the National Assembly. Above all, the idea of socialism has caught the imagination of millions of workers, peasants, youth, women and the urban poor. In fact, all the conditions are ripe for launching an offensive that could abolish Capitalism and begin the building of Socialism.

The 5.6 million people who voted for the PSUV voted for Socialism. But after 10 years of revolution, it is not enough to talk of Socialism. Socialism must be implemented in action, if it is not to be a mere dream. The revolution needs to go onto the offensive!

No concessions to the right wing!
Implement the will of the majority - implement Socialism!
Nationalize the lands, the factories and the banks!
Workers' control in all factories!
Arm the people!
Forward to the Socialist Revolution!