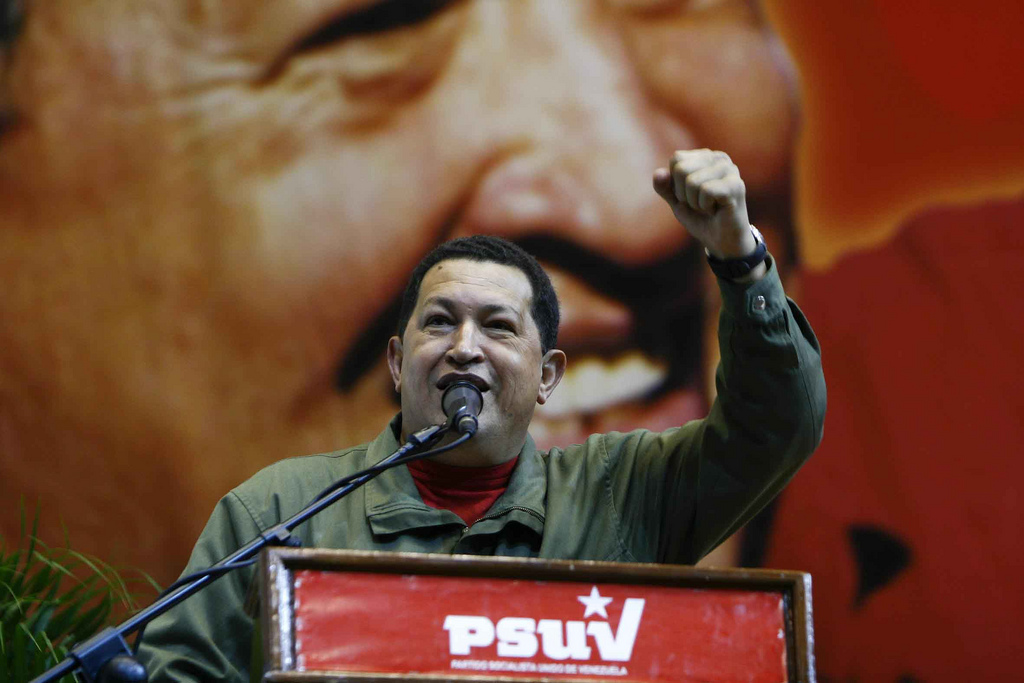 In his weekly Alo Presidente TV programme, Venezuelan president Hugo Chavez announced that some 136 closed factories are being surveyed with the aim of expropriating them. Within the workers’ movement this has been enthusiastically received. The main discussion now is what is meant by socialism, how to apply “co-management” and what the role of the workers is in the revolutionary process and in the economy.

Yesterday’s programme was broadcast from Cumana, where Chavez also participated in the inauguration of the Cacao Agro-industrial Cooperative Union, a Cacao processing plant that had been closed for nine years and has now been bought by the workers organised in a cooperative, with a low interest loan from the government. He explained that the type of cooperativism that is being promoted is one that “generates collective wealth through joint labour, going beyond the capitalist model which promotes individualism”.

“We have identified some 700 closed down companies. This cannot be allowed,” said Chavez, who read a list of companies where the process of expropriation has already started. There are another 136 which are being surveyed, and there are also a lot of companies that are partially paralysed. The total number of companies being investigated is 1149.

He mentioned the case of a fish processing plant in the Guanta harbour, which is ready to start producing. “If the employers do not want to open it, we will have to expropriate it and we will open it ourselves”. President Hugo Chavez went through the list and mentioned a number of companies that are closed but have all the machinery and assets necessary to start producing, including a textile plant, a wood mill, a furniture factory, a hotel, a dairy plant, a shoe making factory, and a steel factory, amongst others.

Paraphrasing a popular Venezuelan saying Chavez declared that, “he who has a shop must keep it open or sell it. If he does not keep it open or does not sell it, we will expropriate it”. He was clearly not referring to small shops though, since many of the companies mentioned in the list would employ between 100 and 500 workers.

He added that for any employers who want to keep their companies open, the state is prepared to help them out with low interest credit, but on condition that “the employers give workers participation in management, the direction and the profits of the company.”

Maria Cristina Iglesias, the Minister of Labour, also intervened in the programme making an appeal “to the trade unions and the workers and former workers of these companies to recover them. Only with the strength of the workers we can defeat this internal enemy which is dependency, and which keeps us away from our goals in the struggle against poverty”.

“This is the revolution. This is socialism,” added Chavez who also said that, “revolutionary democracy is the transition, the bridge, the path towards Socialism of the XXIst century, one that is Bolivarian, Venezuelan and Latin American”. He appealed to the population to “leave to one side the ghosts with which the idea of socialism have been associated”. On Thursday, the president had disclosed the results of an opinion poll according to which the majority of Venezuelans prefer socialism. The survey, conducted by a private company at the end of May and the beginning of June, shows that 47.9% of Venezuelans prefer a “socialist government”, while only 25.7% support capitalism.

Chavez explained that there were still nearly 25% of the people who had not answered the question and that the ideological offensive had to be strengthened. Since Hugo Chavez declared that the way forward for the Venezuelan revolution was to go towards socialism, this has become the main debate within the revolutionary Bolivarian movement, and society in general. Even the president of the business federation FEDECAMARAS was forced to say a few months ago that it was not a question of choosing between socialism and capitalism but rather, “taking the best aspects of both systems”.

More recently, retired Division General Muller Rojas, in his speech to the National Assembly special session on July 5th, Independence Day, made an appeal to create a new Patriotic Society (the organisation that sparked the struggle for independence nearly 200 years ago), but that this time it should be “a Patriotic Society for Socialism”. In a speech to army officers Chavez himself urged them to take the debate on socialism “into the barracks” and to discard the old ideas and prejudices they had been taught in the past about socialism.

Within the workers’ movement these ideas have been enthusiastically received. The main discussion now is what is meant by socialism, how to apply “co-management” and what the role of the workers is in the revolutionary process and in the economy. It is clear that there are still many interpretations of what is meant by socialism. For the more moderate sections within the Bolivarian movement socialism means basically social democracy, or as they say “Zapatero’s socialism”, referring to the Spanish president.

But for the workers and the poor it is clear that socialism means a radical break with capitalism. Chavez himself has explained that, “within the limits of capitalism, the problems of misery, poverty and inequality that Venezuelans face, cannot be solved.”

In the massive state owned aluminium plant ALCASA, where the most advanced experience of what is known as “co-management” is taking place, it is quite clear that to the workers “co-management” means precisely workers’ control and management. In fact a poster printed by ALCASA has as its main slogan “Workers’ Control” (see http://www.alcasa.com.ve/images/Pruebas/CG/Afichep01.htm)

This was made clear by Edgar Caldera, one of the ALCASA workers’ union leaders in an article on May 29th. “If there is something that the workers must understand clearly is that our co-management cannot become a weapon to deepen the exploitative capitalist mode of production. We cannot repeat the sad story of Europe, where the system of co-management was used to get rid of the rights of the workers and acquired conditions”. (ALCASA, co-management, workers’ control and production, http://venezuela.elmilitante.org/index.asp?id=muestra&id_art=1999)

In ALCASA, it is the workers themselves who elect the managers. These managers keep the same wage level they had before being elected and are subject to the right of recall. In the same article, Edgar Caldera gives an example of how workers’ control at the same time means making production more efficient and getting rid of bureaucracy, mismanagement and corruption. He explains how in the Reduction Line III an outside company had been in charge of maintenance and repairs. But in fact this was a source of corruption and in practice it meant that for about 7 years, 10% of the reduction cells in the line had been idle. At a mass meeting the workers decided to kick out the outside contractor and hire the necessary amount of workers to do the same job in house. As a result the repairs were carried out in record time and now the line is working at full capacity.

This experience has enormously raised the political level of the workers who are involved in it. On June 16 to 18 there was a national meeting of workers involved in experiences of workers’ control and the conclusions agreed were definitely very sharp and pointed in the right direction. There was a clear understanding that what is known in Venezuela as “co-management” (cogestion) is in fact a step towards the building of a socialist society. One of the points agreed makes this very clear:

“To include amongst the proposals for revolutionary co-management that the companies must be the property of the State, without distribution of shares to the workers, and that any profits will be distributed according to the needs of society through the councils of socialist planning. These councils of socialist planning must be understood as bodies which implement the decisions taken by citizens in assemblies”

This whole process of political discussion and action by the workers and the poor is not without contradictions. For instance in the old paper mill Venepal, now INVEPAL, the first company to be expropriated by the Bolivarian government, the leaders of the union have taken the step of disbanding the union and are hoping to buy off the state’s stake in the company so that they can be the sole owners and keep any profits from production. Other trade union leaders have warned them against taking this step, insisting that this would mean the maintenance of capitalism and might even set them against other groups of workers in the future.

In INVEVAL, the former National Valve Making Company, CNV, which was expropriated by the government on May Day, difficulties are not arising from the workers themselves but rather from the state bureaucracy. During the signing of the expropriation decree Chavez made it clear that the workers had to have a majority of representatives on the board of directors and that the highest decision making body should be the General Workers’ Assembly. But when the representatives of the Ministry for Peoples’ Economy read the proposed Statutes of the company to the workers, on June 27, there was no mention of the participation of the workers. The mass meeting rejected this proposal and started a process of mobilisations demanding workers’ control. They are now linking up with workers in other companies where there are experiences of workers’ participation in order to spread their struggle beyond INVEVAL.

Finally, in the state owned electricity generation and distribution company CADAFE, from the very beginning of the implementation of “co-management” (which was when the workers exercised workers’ control to prevent sabotage during the bosses’ lockout in December 2002), there have been all sorts of tensions with the company’s managers. First they wanted to limit the workers’ power to making decisions on secondary aspects (one that was described was when a discussion was opened about the Christmas’ decorations in the company’s building in Valencia!). The workers and their union have had to fight for every inch of workers’ control they now have in the company. And now the managers have come up with another argument: “There can be no workers’ participation in strategic industries”.

This argument flies in the face of reality. It was precisely during the bosses’ lockout that the oil workers recovered production in PDVSA, and that the aluminium and steel workers from the massive plants in Guayana physically fought their way to the gas installations and restarted the supply to their factories. It was also at this time the Caracas Metro workers who kept the Metro open and the CADAFE electricity workers who maintained the supply of electricity and prevented the sabotage of the industry.

The Venezuelan labour movement is undergoing a massive transformation and becoming aware of its own strength. In this lies the hope for the future of the Bolivarian revolution.

One thing the workers are very clear on is that, as Chavez said in his Alo Presidente programme, a revolution is a process in which new ideas and models are born, while old ideas die, and “in the Bolivarian revolution it is capitalism that will be eliminated”!