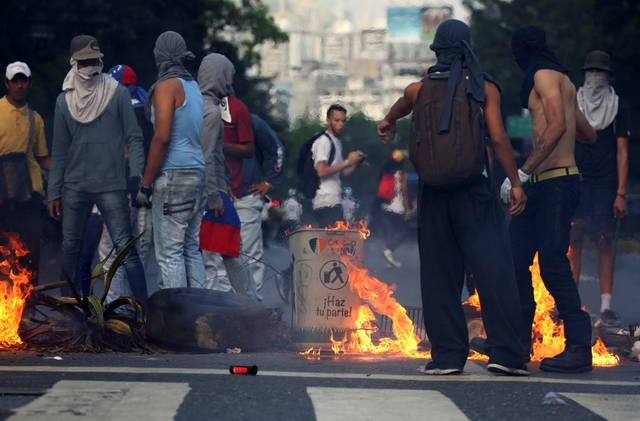 [This article was published by Lucha de Clases, the International Marxist Tendency in Venezuela, on May 24, as a response to the political position of Marea Socialista (Socialist Tide)—an organisation which was part of the PSUV until recently—regarding the current crisis in Venezuela]

What is happening in Venezuela is clear: a sustained and concerted effort to overthrow the Maduro government by force in order to install a direct government of the oligarchy (capitalists, bankers, and landowners) under imperialist tutelage. If such a government were to come to power (whether through elections or an insurrection), that would be an unmitigated disaster for the working class and the people and their organisations. Such a government would implement a brutal austerity package as well as carry out an assault on democratic freedoms and a violent campaign against the workers’ and peoples’ movement activists.

In this context it is clear what revolutionaries (and more broadly, democrats) must do: denounce and oppose by all means this counter-revolutionary offensive.

As well as this, it is legitimate and necessary to criticise, in the strongest possible terms, the policy of the Maduro government, which is insufficient and even counterproductive in facing up to this offensive (making concessions to the capitalists on the economic front, and suffocating the revolutionary initiative of the masses on the political front).

We don’t necessarily have to agree on the latter in order to struggle in a united front for the former.

However, the position of the comrades from Marea Socialista starts from a wrong analysis and therefore proceeds to draw wrong conclusions which put them in the camp of the counter-revolution.

Marea Socialista states that the central point of the situation in Venezuela is “the deepening of the totalitarian course of the government”. From this they draw the conclusion that in 2017 “the priority, from our point of view, is to confront the totalitarian course which the government is following” through “the widest unity in action” (from which they do not exclude anyone, and therefore we assume it also includes the opposition) for which “all sorts of actions should be developed: local, national, and international”.

Nowhere in their statement there is any criticism of the attempted coup by the opposition Democratic Unity Roundtable (MUD). They are only criticised for their “erratic, vacillating, and powerless policy” and the statements seems to lament that “it becomes very difficult to understand how experienced politicians, backed by powerful international and local operators, with the cooperation of an important section of the anti-Chavista intellectuals, have, in less than a year, wasted such an overwhelming electoral victory”. Finally, the Marea Socialista statement criticises reaction, not for wanting to overthrow the government and install one of brutal austerity against the workers, but rather, because “a section of this leadership is prepared to make a deal with the government in order to improve its position in the sharing out of the national income”.

All the quotes above come from the Marea Socialista statement on March 27. It could be said that at that time the current offensive of the counter-revolution had not yet started (it was unleashed with the excuse of the Supreme Court rulings on the last week in March). But a later statement by Marea Socialista about the convening of the Constituent Assembly is not better, but worse, and follows exactly the same political line.

Again, in this statement they do not say a word about the offensive of the counter-revolution and imperialism, but limit themselves to criticising some actions “of foco-ist [vanguardist] groups, or possible trained sharpshooters, which act under the cover of the MUD leadership”, but at the same time they centre their argument on “without any doubt we defend the right of self-defence exercised by the demonstrators when the state violates the exercise of citizens’ rights”.

Falsifying the truth, they state that “the majority of those killed, unarmed youth and women, have been killed as part of demonstrations which were exercising the legitimate right to protest”. Furthermore they point at the state as the main culprit for violence: “This constant violation is the main feature of authoritarian regimes which move to totalitarianism, and is one of the main factors which whips up violence”.

But perhaps the most scandalous case is that of the Mérida Marea Socialista statement regarding those who were killed on April 24 in this Andean city. What happened there was that sharpshooters from within the ranks of the opposition protesters killed two people who were part of a Bolivarian rally against the opposition. One of them was a regional government worker, the other a crime investigator, who was also employed by the (Chavista) regional government. The Mérida Marea Socialista statement about these events does not even mention “foco-ist groups” nor “possible trained sharpshooters . . . under the cover of the MUD leadership”. No, the statement blames the events on . . . the governor of Mérida!

Scandalously, the statement describes the reactionary opposition protests as “the intervention of the Mérida people to raise their voice against the national policies, and in order to sort out in practice the repression of participatory and protagonistic democracy which is viciously been violated by the higher body [the national electoral council]”.

The incident in which workers of the regional government were shot at is described as “a violent delay [sic] which by chance resulted in one person dead and four wounded by gunfire, all of them workers of the regional government, according to the governor”. BY CHANCE!! Opposition sharpshooters fire on a group of workers, but they are killed BY CHANCE!

The statement then proceeds to accuse those killed of being paramilitaries, in order to justify their assassination: “the citizens must ask themselves if the Mérida State Governorship has changed its address to the aforementioned area, or this group of five belong to the terrorists or the killer collectives which have been threatening people throughout Mérida with their motorbikes, armed with weapons, and there is no moral authority to sanction these paramilitary activities, or perhaps these armed gangs belong to the government?”

Just in case, to cover themselves, they finally blame the governor: “If these state workers were in this high risk area, it has to be highlighted . . . under which interests were they in this high risk area”. So, those responsible for the killings were not the opposition sharpshooters who fired the bullets who killed the workers, but the regional government workers for being in the line of fire (!!), or the governor, for putting them in that “high risk” place.

At this point one doubts if Marea Socialista members should be addressed as comrades any more. In reality they have put themselves on the wrong side of the barricade.

Those who know the opinions of the author of this article are aware of the fact that I am a fierce critic of the policies of the [Venezuelan] government. Not just now, but for a long time—precisely because I think that the policies of the government, instead of pushing the revolution forward towards socialism, set it back. In many of these criticisms it is possible that we agree with Marea Socialista. But it is one thing to criticise the government and its policies; it is quite another to ignore that there is a counter-revolutionary offensive with the aim of overthrowing it and replacing it with a government which, far from improving the situation, would make it a thousand times worse, from the point of view of the working class and the people. In this battle we are not neutral. We cannot be neutral.

It would be like if in Spain in March 1936 one would argue that it does not make a difference, that we support neither the government of the Republic, which represses workers, nor the fascists who conspire to carry out a coup. Worse still, it would like if in Spain 1936 we said nothing about the preparations of the ruling class to carry out a coup, and at the same time concentrated our fire against the government of the Republic.

Leon Trotsky, whose writings we are convinced some in Marea Socialista must have read, was a fierce critic of the Spanish Popular Front government in 1936, during the Second Republic. He criticised it for maintaining bourgeois property of the land and the economy, for stopping the revolutionary initiative of the workers, for attempting to conciliate with the bourgeoisie, for its class collaborationist policy, etc. But Trotsky did not have a neutral attitude regarding the reactionary assault and the military fascist uprising which followed it. In his statement to the Dewey Commission, which investigated the Moscow Trials, Trotsky was specifically asked about this question. This was his answer:

With whom would you side at the present time in Spain?

TROTSKY: I gave the answer in many interviews and articles. Every Trotskyite in Spain must be a good soldier, on the side of the Left. Naturally, it is so elementary a question – you know it is not worth discussing. A leader or any other member in the Government of Caballero is a traitor. A leader of the working class cannot enter the bourgeois government. We did not enter the Government of Kerensky in Russia. While we defended Kerensky against Kornilov, we did not enter his Government. As I declared that I am ready to enter into an alliance with Stalin against the fascists, or an alliance with Jouhaux against the French fascists. It is an elementary question.

In his response, Trotsky mentions the Kornilov offensive in Russia during the 1917 revolution. Trotsky, like Lenin, opposed the Kerensky government, which was a class collaborationist government, backed by the reformists within the labour movement. It was a government unable to satisfy the demands of the masses who had carried out the February Revolution. In fact, the policy of the government was precisely the opposite: it continued with the imperialist war, it refused to give the land to the peasants, etc. But when General Kornilov, in August 1917, attempted to overthrow that government, with the aim of restoring the old regime, a direct dictatorship of the ruling class, the Bolsheviks did not hesitate, nor did they take a neutral position. Without giving any political support to Kerensky, without ceasing their opposition to his policies, they put themselves in a united front with Kerensky against Kornilov. “We shall fight, we are fighting against Kornilov, just as Kerensky’s troops do, but we do not support Kerensky. On the contrary, we expose his weakness. There is the difference. It is rather a subtle difference, but it is highly essential and must not be forgotten.”

Unfortunately, the comrades from Marea Socialista seem to have learnt nothing from Lenin or Trotsky. Perhaps they think that there is no difference between a government of Maduro and a government of the MUD. Or worse, perhaps they think that the main enemy to fight is Maduro’s government. In fact, they are letting themselves be influenced by the pressure of petty bourgeois public opinion, and that pushes them into a position in which objectively they are on the wrong side of the barricade. If the MUD comes to power, it is likely that the repression it will unleash will not distinguish between Chavistas and “critical Chavistas” (as they, wrongly, describe themselves).

Those who support Marea Socialista abroad and publish their statements without any comment, are also responsible for this criminal political line.