International Marxist Tendency
Share
Tweet
On Saturday, June 21, Alan Woods was invited to attend a meeting of workers in the auto sector. He addressed the meeting of more than 600 autoworkers from all over Venezuela, in Barcelona, Anzoategui. The debate and the mood among these workers revealed a high level of understanding of the tasks that need to be carried out to push the revolution forward to its final conclusion, the expropriation of the bosses.

In the morning of Saturday, June 21, comrade Alan Woods was invited to attend a meeting of workers in the auto sector. More than 600 workers from the assembly plants from all over Venezuela were present, with delegations from Mitsubishi, Macusa and Vivex in Anzoategui; Toyota in Cumaná, Sucre state; Ford and Chrysler in Valencia, Carabobo, and representatives of other unions, including those of food monopoly Polar in Anzoategui. 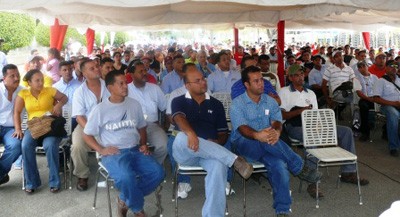 There were two main reasons for this national assembly, on the one hand to report to the workers on the progress of the "rectification, revision and new thrust" of the "Plan Venezuela Movil"; and on the other hand to discuss a campaign demanding the blocking of the reform of the current labour law, so that a new law can be discussed democratically by the rank and file workers.

"Plan Venezuela Movil" was an initiative of the government to give companies tax breaks in order to produce low cost cars for the workers and the people. At the same time, through quotas, there was an attempt to restrict imports of cars and parts from other countries, so that more jobs would be created in Venezuela. One of the reasons for this meeting was to condemn the car companies that have flouted the plan. Out of 400,000 vehicles sold in Venezuela last year, only 10% were made in the country, while the rest were imported.

The meeting was opened by comrade Felix Martinez, general secretary of the Mitsubishi Workers' Union in Barcelona, who set the tone for the meeting with shouts of "Long live the working class! Long live the socialist revolution!" enthusiastically chanted by the workers present. This was followed, as has become a tradition in political meetings, with the singing of the national anthem. Then comrade Felix explained the agenda of the meeting. One of the most controversial points was the reform of the new labour law: "Why is the labour law being discussed within the four walls of the ministries without the workers being informed?" He appealed for the government to rectify this and pointed out that socialist legislation can only be passed if it is discussed with the full participation of the rank and file of the workers' movement.

The first speaker to address the meeting was comrade Alan Woods, who pointed out that the problems of the auto industry in Venezuela are further proof of the parasitic character of the capitalists. He stressed the need for the workers to mobilize in order to break the resistance of the bureaucracy and the reformists and that mass meetings like this one were precisely what should be organised.

After having greeted the role of president Chavez in raising the issue of socialism, Alan severely criticized the meeting of businessmen with the President, which took place on June 11 in Caracas. "Here in Venezuela, far too many people are looking to the top waiting for president Chávez to solve their problems... it is the people and the workers who have to push the revolution forward from below, through the taking over and occupation of factories in order to expropriate the capitalists". This was received with enthusiasm by the workers. 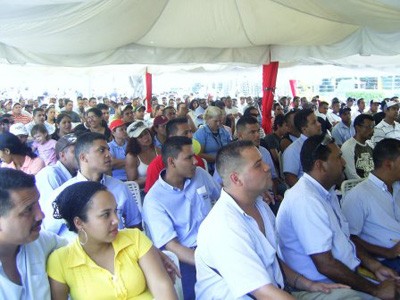 Next to speak was comrade Antonio Hernandez from Toyota Cumaná, who explained how the employers in the auto industry had not implemented a single one of the agreements of Plan Venezuela Movil, and called for a national mobilization of car workers. "A few days ago the employers made their voice heard to president Chavez, it is now time that the president hears the voice of the workers in the streets", he said to loud applause. An example of this was the fact that "while in the 1980s, Venezuela imported 80% of all car parts for cars made in Venezuela, now the figure was closer to 90%."

Comrade Antonio also explained how they had "paralysed for 6 days the plant in Cumaná, because of the poor health and safety conditions... Three months ago 206 workers were ill with hernias, lumbago, etc., and now this number has jumped to 241, a 15% increase". This means that this multinational is leaving dozens of workers injured, "whose average age is only 26 years."

Juan Aguilar, Finance Secretary of Ford Motor workers' union SINTRAFORD, pointed out that "many of the reforms that president Chávez proposes are kept in draws and never implemented," as is the case with Plan Venezuela Movil, and for this reason the workers must "push forward, through struggle from below". He explained that the employers meet and draw up strategies to adopt in the face off the workers' movement, and that the workers had to do the same thing: "We must strengthen the working class in order to defend our rights". He also denounced the fact that the national government is trying "to limit workers' conflicts in the run up to the governor and council elections in November" and that "faced with the Ministry of Labour, the workers are at a disadvantage in relation to the bosses". He made a call for the building of the car workers' federation of the UNT, to fight attempts of the bosses to control the workers' movement "by sowing divisions among the workers and attempting to buy them off."

Oscar Gómez, secretary of the Workers' Union at Polar, the company which has a monopoly control of food distribution in Venezuela, argued that "the means of production must belong by the workers" and made an appeal to struggle for a new Labour Law.

Particularly moving was the intervention of comrade Carmen, a worker at the dinning hall at Mitsubishi Barcelona, who was sacked together with a group of workers. She was introduced by comrade Felix Martinez who asked those present: "Are we going to allow these sackings?" to which the workers replied as one "NO, Unity, Unity!" "The comrades were sacked because from the dining hall they were in a position to report to us about the manoeuvres of the bosses", he said, "on Monday these comrades are going to go back to their jobs by any means necessary", which received a thunderous ovation from the workers. Felix explained how the workers have separate interests from those of the bosses, while workers are united among themselves. "How many of you have drank whisky, played golf or flown in the bosses' plane?" he asked amongst general laughter.

Christian Pereira, a leader of the Chrysler Workers' Union, explained that the car industry bosses have saved more than 600,000 BsF in tax breaks from the government through Plan Venezuela Movil, so that the prices of cars would be lower. In fact this had been a swindle against the government and the people on the part of the capitalists: "vehicles have been sold at double their price or more, and more cars than ever have been imported". Pereira asked, "How many hospitals could have been built with that money? How many work doctors could have been trained to increase the ridiculous amount that we have, only 180 in the whole country."

After a full democratic debate, the proposal for mobilisations was passed in a militant mood of confidence among the workers. Dozens of copies of the Marxist paper El Militante were sold as well as copies of Alan Woods' book "Reformism or Revolution". This meeting was an indication of the readiness to struggle and high political level of consciousness of the Venezuelan working class which is the key for the future of the revolution.