Share
Tweet
The workers of Vivex, an auto parts maker in Anzoategui, Venezuela, have been occupying their factory since November 21, 2008, and demanding its nationalisation under workers’ control. Here is an interview with Yeant Sabino, general secretary of the union SinTraVivex, explaining the latest news of the occupation and the recent threats they have received. 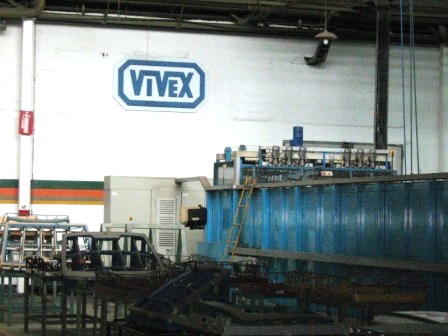 El Militante: What is the situation of the Vivex workers?

Yeant Sabino: The union is taking part in talks organised by the Presidency of the Republic which are taking place in the Palacio Blanco and led by captain Nelson Pereira Ibarra. Today, Tuesday March 31, he threatened the workers saying that unless we accept certain conditions - which were never agreed at the negotiations - that he would withdraw with his team and would allow the tribunals to come in. We cannot allow the installation of a tribunal, particularly since this was never agreed at the high level negotiations.

EM: Is the media spreading the rumour that the workers are taking away assets from the factory?

YS: Yes, the owner and a really small group around him are saying that the workers of Vivex, who have been occupying the factory since November, are taking away assets and tools. In order to refute this slander and so that the people can see the truth we agreed to an inspection to check all the machines and tools, but we rejected the idea that the owner would bring his financial advisers because, right now, we do not have anyone who can deal with those matters. We gave a list of workers who would join the high level negotiations and the tribunal as already agreed. This was last night at about 9pm when we handed over this list of 8 people. This morning we received a phone call saying that the owner wanted to include a series of people that we disagree with. The reason for this is that amongst those proposed there were workers who have sabotaged machine tools, like at oven number 8, and in other sections. These workers, Afredo Barroso and Carlos Cova, were in fact agents of the boss. They participated in the occupation for several days with the aim of sabotaging the machines and blaming the workers for it. 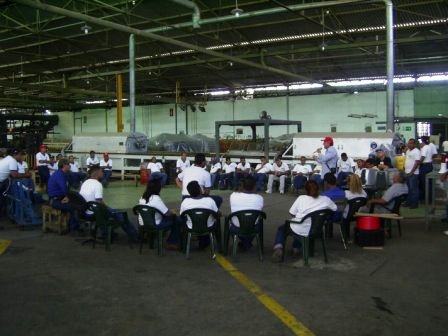 EM: What are the workers going to do?

YS: We have decided, in a mass meeting of the workers that we are not going to be threatened by anybody. We are fighting for demands that go beyond the defence of our jobs and the livelihoods of our children and our families and we are not going to allow any government functionary to come here and impose his rules, which are the same as those of the boss.

EM: The functionary of the Presidency of the Republic gave you a message allegedly from President Chavez himself. What was the content of the message?

YS: He said that the president of the Republic had sent a message saying that he was not able to expropriate Vivex. We said that we would only accept a message like that if we could see it in writing. But we also asked about what is going to happen with the workers in other factories when they start to close down. Sotuca, a factory not far away from here has just sacked 600 workers.

EM: So, this captain, has he threatened you with eviction from the factory?

YS: No. He has not talked of eviction, but rather that he would withdraw his working team from the plant and would send a message to the President of the Republic, which we would not have access to, saying that we the workers did not want to collaborate. This is not true. The fact is that captain Perez wants to impose something which only benefits the owner of Vivex.

Please send politely worded messages of support to the President of the Republic, Hugo Chávez, asking that any solution to the conflict should be based on full agreement with the workers and with no threats against them.

You can use this model letter in Spanish.