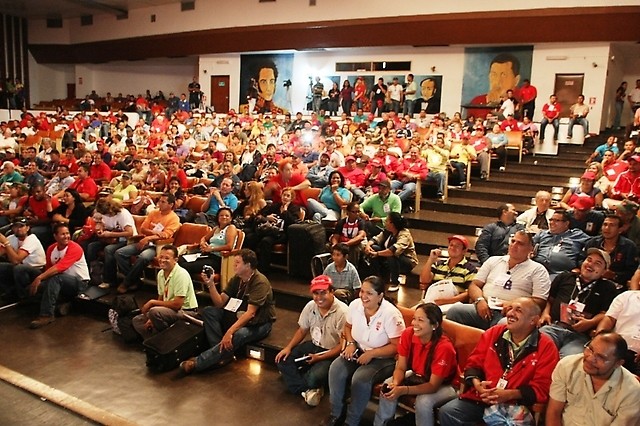 On the 21st of May, a spectacular meeting of more than 900 worker activists took place at the SIDOR steel works in Ciudad Guayana in the eastern part of Venezuela. The purpose of this encounter was to discuss the ongoing struggle for workers' control in the Bolivarian Revolution.

After a short cultural event on Friday, the meeting itself opened on Saturday 21st of May in the theatre hall of SIDOR. This venue has a total capacity of 550, but the room quickly got completely packed, with more than 200 extra workers following the proceedings standing up. More workers joined the meeting on Sunday, thus giving a total assistance of 900. The opening ceremony was especially emotive, with the singing of the Venezuelan national anthem followed by the anthem of the world proletariat: The International.

The meeting had been organized by different groups, most of them from the UNT trade union confederation. It is worth pointing out, that the workers' leaders of the Basic Industries in Guayana, Venezuela's Industrial heartland, had played an extraordinary role in the convening of this  gathering. This should not surprise anyone, as Guayana is the place where the struggle for workers' control has reached the most advanced level, being confronted directly with physical violence on the part of the bureaucratic factions in the state apparatus.

The gathering at SIDOR was probably one of the most representative meetings of the Venezuelan labour movement in the last couple of years. Around one hundred factories were represented and the participants had come from 21 out of Venezuela's 24 states. The logistics of the meeting had been organized by the workers of Guayana, based mainly on voluntary work and the sacrifices of the ordinary workers who opened their houses to give accommodation to the participants from other parts of the country.

The proceedings of the meeting were divided into three parts: 1) Exchanges of experiences of workers' control 2) Workshop discussion about the nature and obstacles for workers' control and 3) Plenary session with the conclusions and agreements of the encounter

A theme that sprung up again and again was the way in which the bureaucratic sectors of the state are constantly trying to undermine the implementation of workers' control. Despite the fact that president Chávez on several occasions has spoken energetically in favour of workers' control and even suggested that managers be elected in the state industries, local mayors and governors are doing everything possible to crush such initiatives.

Almost every report at the meeting bear testimony to this fact. An important moment at the SIDOR meeting was when Elio Sayago, the president of the nearby aluminum plant ALCASA addressed the audience. Sayago is a worker of ALCASA who was appointed president of the factory by Chávez in May 2010, after having been recommended by his co-workers. At that time Chávez called upon the workers to implement workers' control and he appointed other workers in SIDOR, BAUXILUM and VENALUM as presidents of the factories. 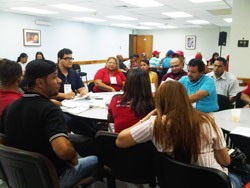 However, in the year which has passed, the governor of Bolívar State, Rangel Gómez (who was elected on a PSUV ticket) has been actively supporting the FBT (Bolivarian Workers' Force), a trade union faction which is using violent methods to sabotage the implementation of workers' control. In the case of ALCASA, this took the form of a violent picket which lasted for 34 days, during which hired gangsters took control of the factory gates, in order to sabotage production. The aim was to bring down Sayago and stop the process of workers' control that he is trying to develop. Similar actions have taken place in BAUXILUM and, to a lesser degree, in SIDOR.

The interventions of workers from other parts of the country pointed in the same direction. Yenni Cortéz of the GOTCHA factory in Maracay, Aragua state, explained how both the governor and the local mayor have turned a deaf ear to the constant appeals for nationalization of this textile firm, which has been occupied for two years by its female workers.

Yahaira López, member of the factory committee at INAF, a factory in Cagua, Aragua state, which produces articles for bathrooms, gave voice to the same concerns, when she pointed out that the nationalization of the plant, which was announced by Chávez in two occasions (November 2009 and June 2010), has not been carried out in practice.

Workers from VIVEX, a factory producing windscreens for the automobile sector, also made their presence felt at the gathering. Jean Carlos Sabino, the VIVEX trade union leader explained that they had been fighting for two years for nationalization, without any response from the government. The workers finally decided to set up a co-operative, as a temporary legal foundation which will enable them to produce and sell their products. But the situation is unstable and the workers are demanding the nationalization as the only viable solution.

A remarkable moment at the gathering was when Mejías intervened, pretending to be the representative of the trade-union at the Mitsubishi factory in Barcelona, Anzoátegui State. In fact, he is the leader of the new yellow pro-bosses trade union which has been set up by the factory management after the sacking of 220 workers, including the 11 workers of the real revolutionary trade union in Mitsubishi. When the audience at the gathering heard the astonishingly shameful intervention of Mejías, who justified the actions of the bosses, the mass of workers stood up on their feet and began to heckle his speech, demanding that he should be kicked out of the hall.

The representative of the real Mitsubishi Trade Union (SINGETRAN), Félix Martínez, was present and insisted that the workers continue the struggle against the sackings and call upon María Cristina Iglesias, the Venezuelan Minister of Labour, to change her attitude and begin to support the workers in the struggle against the Japanese multinational.

There were many other interventions at this encounter, too many to mention in this brief report. The main feature of all of them was that the advanced elements of the workers' movement are not disillusioned in the slightest. They understand that the struggle to advance workers' control in the factories is a life and death battle for the very survival of the revolution. The newly nationalized companies will be a complete disaster and possibly ruin Venezuela's economy if management of production is kept in the hands of the state bureaucrats who aren't genuinely interested in proving that state owned enterprises can be successful.

A resolution against the behaviour of the governor of Bolívar State, Rangel Gómez, was passed unanimously. Significantly, many of the workshops had also discussed the problems of the present state of affairs in the PSUV and the lack of a party that really serves the interests of the working class. More than one workshop proposed the formation of a “workers' tendency” in the PSUV, in order to reconquer the party for true working class policies. 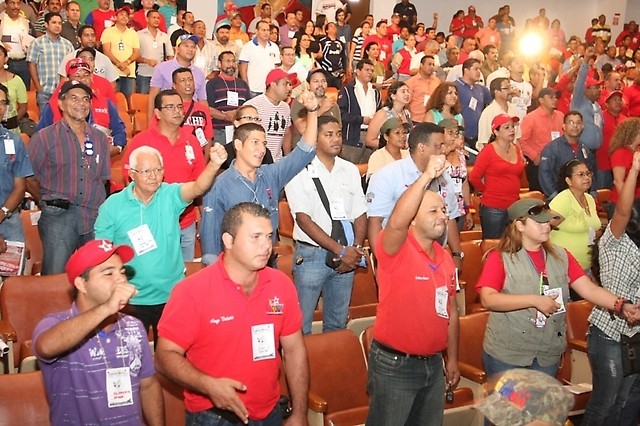 Finally it was agreed to convene a new encounter on June 18th in Puerto la Crúz, Anzoátegui State, in order to follow up on the agreements and resolutions of this gathering. The conclusions of the workshops will be collected and transcribed into one single document, which will be given to Hugo Chávez, as the workers' proposals on how to solve the present problems.

It is now absolutely crucial that this encounter does not end up as mere paperwork. In our opinion, a concrete plan of struggle should be discussed, involving a day of action to promote workers' control throughout Venezuela. In June 2005, president Chávez read a list of more than 1,300 factories which had been abandoned or were working at minimum capacity. At that time he appealed to the workers to occupy them! But unfortunately, the trade union leaders did nothing to organize such an action in a conscious manner.

Now this marvelous encounter of 900 workers activists provides us with a new opportunity. It is time to give a lead to the workers’ movement on a national scale, calling for a day of actions and factory occupations. Such an action could give a new impulse to the Revolution and challenge the very existence of capitalism in Venezuela.