On Wednesday 14 August South Africa's biggest labour federation, Cosatu is scheduled to hold a special meeting of its Central Executive Committee to discuss the future of its General Secretary Zwelinzima Vavi. This is only the latest instalment of a series of divisive events that have engulfed Cosatu. At bottom, this reflects a struggle between the right wing and the left wing of the movement.

The official reason for the meeting is to discuss the scandal that erupted after Vavi admitted to having an extramarital affair with a junior employee of the federation. Originally the implicated  woman accused Vavi of rape. But after text messages between the accuser and Vavi came to light, suddenly the woman withdrew the complaint that she had lodged with Cosatu office bearers. 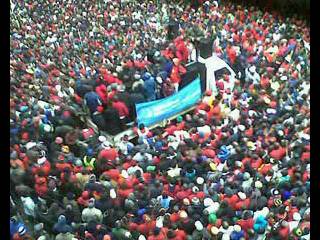 NUMSA members on strikeThe text messages revealed that the affair had been going on since the end of last year. But the most damning thing about this is that it emerged from the text messages that the woman and her husband apparently aimed to blackmail Vavi. Vavi subsequently went to the police with a charge of extortion, alleging that the couple had demanded Rand 2,000,000 for their silence.

The text messages also revealed that the couple were not acting alone and that other forces were also behind the plot. This should not be a surprise for anyone who has been observing the goings-on at Cosatu House. For the whole of the last period there has been a concerted attempt to oust Vavi as General Secretary in an underhanded manner.

This process of faceless people wanting to get rid of Vavi goes as far back as 2006 when he was accused of misusing the official union credit card. When that accusation collapsed, there were allegations that Vavi had sold a Cosatu building for less than its market value. This attempt to oust Vavi also failed. In all these cases not one shred of evidence was ever produced to verify the claims and in all cases the allegations were made anonymously and then spread widely by the media.

The union federation is openly split. But the division is not only on the question of the General Secretary. What this conflict reveals goes to the heart of the contradictions of the different forces within the Tripartite Alliance of the ANC, SACP (Communist Party) and COSATU. At bottom it is a struggle of opposite class forces.

Walter Tseledi, the General Secretary of the municipal workers union Samwu describes the reasons why the right wing want to get rid of Vavi: "Comrade Zwelinzima has been outspoken, as he must be as a leader of a militant trade union federation, but has not strayed from the policy of our Federation. He has been targeted because he has dared to speak truth to power, on unemployment, the absence of service delivery, on corruption, and in so doing has incurred the wrath of those with career ambitions and those waiting to enjoy the fruits of office by legal or other means." Samwu also said that the rightwing must stop trying to get rid of Vavi and to concentrate on serving the workers.

This is the crux of the matter. Vavi is very outspoken about what he calls "hyenas", "the predatory elite", and those in the private sector who defraud the state through the tender process by which public contracts are adjudicated to the private sector. It is also a reflection of a struggle of class forces in South African society as the President of the metalworkers union Numsa, Cedric Gina explains: "From Numsa's perspective this rupture in Cosatu is between the forces of capitalism and the forces of socialism. Those who want Comrade Vavi out of Cosatu want a Cosatu which will be a 'toy telephone', a 'labour desk', a pro-capitalist Cosatu, and those who are defending Comrade Vavi want a revolutionary, socialist, anti-colonialist and anti-imperialist Cosatu."

Numsa are campaigning for a special congress of Cosatu in December to let the rank-and-file decide the way forward. The rightwing is heavily opposed to this. Vavi is very popular among the workers and it is clear that the workers will not tolerate the ouster of Vavi at such a congress. Therefore the rightwing is manoeuvring in the CEC for the removal of Vavi. So the stage is set for a major confrontation between the rank-and-file and the right wing in the leadership.

This is a struggle for the heart and soul of Cosatu and a struggle about which political direction the Federation should take. Should it align itself to the right-wing bureaucratic clique around ANC Secretary General, Gwede Mantashe and SACP General Secretary, Blade Nzimande, or should it concentrate on representing the interests of the workers even if this comes into conflict with the ruling clique and the ANC government?

This whole sordid affair has its origins in the ruling Stalinist leadership in the SACP which puts its relationship with President Zuma ahead of the interests of the working class whom they should represent. Vavi has fallen out with Blade Nzimande because of the criticism of Cosatu’s secretary of the deployment of SACP leaders (Nzimande included) to government where they carry out anti working class policies.

Another factor is that some unions have in the last period completely abdicated their responsibilities. A clear example of this is the National Union of Mineworkers, which has lost 37,000 members in the wake of the Marikana killings last year. On the other hand, the National Union of Metalworkers of South Africa, Numsa, pursuing a more militant direction, has overtaken NUM to become Cosatu's biggest affiliate. Some union leaders no longer share the materialist interests of workers, but have a material interest in maintaining the current status quo and defending their cosy relationship with the Zuma leadership of the ANC.

The dominant right wing clique managed to ruin the last congress of the Young Communist League and then proceeded to purge the ANC Youth League, including disbanding its elected NEC. This was followed by a slow-moving purge of the rival faction of those who did not support President Zuma at the last Mangaung Conference in December 2012. Now the target is Cosatu and the General Secretaty, Vavi. The aim is to silence those who are opposed to the pro-capitalist policy of the dominant faction in the leadership of the ANC and SACP.This is the material basis for the infighting in the labour federation.

Broadly, the left of the organization is composed of the municipal workers union Samwu, the metalworkers of Numsa, the nurses union Denosa, the retail workers union Saccawu, and the football players union Safpu. The right wing centres around the president of Cosatu, S'dumo Dlamini but also includes the mineworkers NUM, the education and health care Nehawu, the transport workers Satawu,and the police and prison officers union Popcru.

However, such a generalisation can be misleading. For instance, the teachers union, Sadtu is openly split. Just yesterday,13 August, Sadtu's NEC suspended its president, Thobila Ntola for allowing Vavi to address Sadtu members in the Eastern Cape. Crucially, Ntola's suspension comes 24 hours ahead of the CEC meeting that could force Vavi out. It is certainly possible that the CEC could get Vavi suspended because the balance of forces seems to be in favour of the anti-Vavi faction. However it is also possible that the pro-Vavi faction could prevent this. The possibility of a split in the Federation is a real possibility. Numsa Deptuty General Secretary, Karl Cloete put the warning frankly:"Unless we handle things maturely, comradely and properly, there is indeed the possibility of a split in Cosatu."

But it is also possible that the Federation could patch up some sort of deal for now to prevent what NUMSA president Gina calls an "implosion of Cosatu." But whatever comes out the Wednesday's CEC, it is clear that the acute crisis of South African capitalism is reflected in the whole Mass Democratic Movement. It is having a convulsive effect on all organizations of the working class.

As was shown by the removal of Mbeki at the Polokwane congress of the ANC, the left wing is far stronger within all the organisations of the movement, as it represents more faithfully the interests and views of the masses of workers and the poor who vote and support the ANC. However, the left is weakened by its lack of a clear and coherent alternative to the right wing, and above all by the refusal of its leadership to undertake the battle openly. This is what happened at the Mangaung conference, when Vavi and his supporters, the NUMSA leadership included, refused to wage a serious battle against the Zuma right wing. Their stance, far from “preserving the unity of the movement” emboldened the right wing which has now moved to remove Vavi.

In its statement on the current crisis, NUMSA mentions the Freedom Charter and particularly the nationalisations policy. This is absolutely correct. Only by decisively challenging the power of capital, through the nationalisation of the key industries under democratic workers control and a wide ranging agrarian reform, can the most pressing needs of the masses be addressed. The alternative is one where the acceptance of the limits of capitalism means further attacks on the living conditions of the masses. If the struggle for socialism was raised seriously within the ranks of the movement, there would be, no doubt, a clear majority for it, even in the ranks of unions which now oppose Vavi, the ANC YL, the YCL, the Women’s League and the ANC itself.