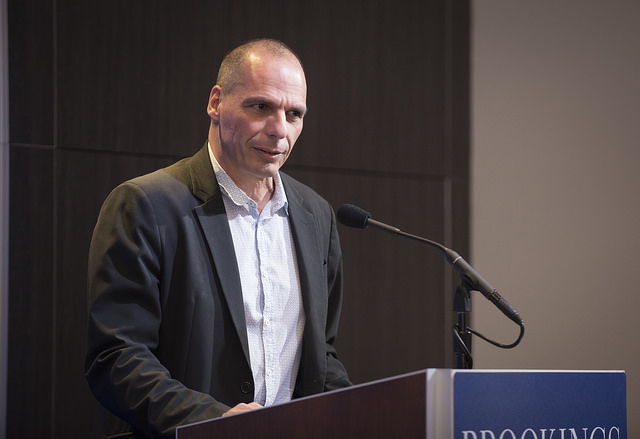 In the seaside town of Brighton and Hove, home to Britain’s only Green Member of Parliament, the most infamous man in Europe would need no introduction; and so it was last month, when crowds numbering in their thousands flocked to see an ex-finance minister of a failed state discuss the nature of Europe, the collapse of the world economy and what to do about it.

For a short time in 2015, Yanis Varoufakis held the world by storm, with Alexis Tsipras at his side, a moment in history arrived when the capitalists in Europe trembled in their boots. So what could this fallen hero - this renegade economist - have to say about the world economic crisis that has befallen all of us?

Varoufakis refers to his time as finance minister of Greece as the Athens Spring. But this episode was perhaps the most graphic demonstration yet that in this epoch of capitalist crisis, the bankers and their representatives will not abide governments who do not follow their diktats. Despite all the hopes and dreams of the Greek working classes and the European Left who fought to change this unjust system, the Syriza government of Tsipras was brutally crushed and humiliated by the Troika of the ECB (European Central Bank), the IMF, and the European Commission. No one can doubt the sincere desire of Syriza’s leaders to take on the Troika, but despite attempts at “governmental disobedience”, these leaders capitulated and European capital reigned victorious.

Varoufakis is keen to argue that despite the popular mandate to fight on, despite the ECB crumbling more and more each day, the decision to surrender came from traitors in his own ranks who sold Greece up the river and broke the government. At this event in Brighton, he argued that he had a plan - a plan to continue the fight: to create parallel payment systems when they closed the banks (so pensioners didn’t starve); to stock supplies when food, medicine and power began to run low; to constantly battle the right wing press and European establishment who were determined to see Syriza fail. But his plan never saw the light of day.

Greece now faces a crisis worse than the Great Depression and the Syriza government, under the duress of the Troika, is carrying through even worse austerity that their Greek Tory predecessors. The same workers and youth who previously took to the streets in celebration of Syriza’s victory are now back on Athens’ streets striking and protesting against this “Left” government.

Varoufakis fears the eurozone’s collapse. The European Union is on shakier ground than ever before. It is paralysed by an economic car crash played out in slow motion; meanwhile, the migrant crisis is straining social cohesion to breaking point and the limits of the nation state constrain an already inept technocratic bureaucracy. His history of the EU, if only implicitly, is one where nationalist capitalist interests, primarily those of France and Germany have, in attempting to further their own narrow aims, created an economic union riddled with contradictions; in doing so they have undermined the social and economic cohesion of the continent.

The far right now governs Poland and Hungary, and has come close recently in Austria too. Their stock has grown in Britain, Greece, France, Germany, Sweden and Denmark. It is easy to see how they are fuelled by the current crisis - a crisis of global capitalism. Varoufakis sees a bleak future: either Europe pulls itself up by the bootstraps, or we descend into barbarism. “2008 was our 1929!” he proclaims. “We face a stark choice between destruction or democracy!” But how can democracy save us now?

The ex-finance minister of Greece points to a few key changes to defeat the Eurocrats who scorn the idea of the working class, or as he calls them “the working poor”, having power in society. He argues for transparency - to publish the minutes of euro group meetings; to change the apolitical nature of the central bank; to create a “People’s (green) QE”. His crowning idea is his “Modest Proposal” which would see minor changes to European treaties in order to “save capitalism from itself”.

Unfortunately, despite the so-called “pragmatism” of such changes, they are in essence utopian. To change a system, which he himself describes as being “designed to the benefit of corporations and banks”, would require those same banks and corporations to be willing to do so. But they are not; and, rather than peacefully subsiding for the good of the European people, the rival nationalist interests which created such an inept system in the first place have escalated to new heights.

Despite the backing of other high profile figures from the Left - such as Caroline Lucas, Noam Chomsky, Slavoj Zizek, Owen Jones and Julian Assange - Varofakis’ “DIEM25” (Democracy in Europe Movement 2025) is doomed to fail. Even if he once again returned to the upper echelons of power in Europe, no amount of reform will solve Europe’s woes, for they are embedded in a global crisis of capitalism: an economic system which is buckling at the knees and is incapable of revival. The Chinese slowdown; the collapse of the BRICs; and the ball-and-chain of American debt: these are all contributing to the demise of the EU, and all find their roots in the internal contradictions of an economic system no longer fit for purpose.

When the interviewer for this event, Paul Mason, pushed Varoufakis on the question of whether DIEM25 can really succeed, the otherwise enthusiastic Greek was pessimistic. Nevertheless, he strongly believes that we need to try, for the alternative is too awful to consider. “The left has never done well in deflationary periods” he claims. For this reason, he appears to embrace fighting with those who he knows are doomed to failure, to “save capitalism from itself”.

Alongside his “modest proposal”, his reformist arguments, and a genuine pessimism about the potential for the Left, Varoufakis made three key demands for his movement:

Taken at their least radical, therefore, these proposals amount to nothing more than fresh paint for a badly rusted system. At their most, however, such proposals would mount a fundamental challenge to the very basis of the capitalist system - demands that could only be achieved, in other words, not by reforming the system but by smashing it.

Varoufakis is timid in taking such demands to their full revolutionary potential, instead choosing to hide in the shadows of reformism. He is paralysed by a deadly combination of fear and pessimism, choosing the path of “pragmatism” in order to defeat the main threat that he sees for Europe: the rise of the far right. But what Varoufakis fails to also see is that the greatest boost for the far right comes from the very timidity of Left leaders such as himself, whose “pragmatic” attempts to try and reform European capitalism mean they cannot offer a genuine solution to the problems facing society.

When such “progressives” fail and the Left is defeated by its leadership’s lack of confidence in the power of the working class, is it any wonder that demagogues and far-right populists gain a certain echo in society? With his pessimism and “pragmatism”, therefore, Varoufakis ends up creating a self-fulfilling prophecy, sowing the seeds of our own demise, and bringing into being the very future he is trying to stop.

Workers and youth across Europe are not blind fools and can clearly see the limitations of reformism, which offers no solution to the deep-rooted crisis of capitalism that plagues our lives. In the final analysis, then, as Leon Trotsky emphasised, the “historical crisis of mankind is reduced to the crisis of the revolutionary leadership”.

Let us put an end to the dictatorship of bankers and the global capitalist system that they control, which is rotten to its very core. What is needed today is not an attempt to patch up European capitalism, but revolutionary leadership that offers the only real alternative: that of a Socialist United States of Europe.