A brutal police charge against high school students protesting against education cuts and police repression in Valencia has created a wave of revulsion throughout Spain. 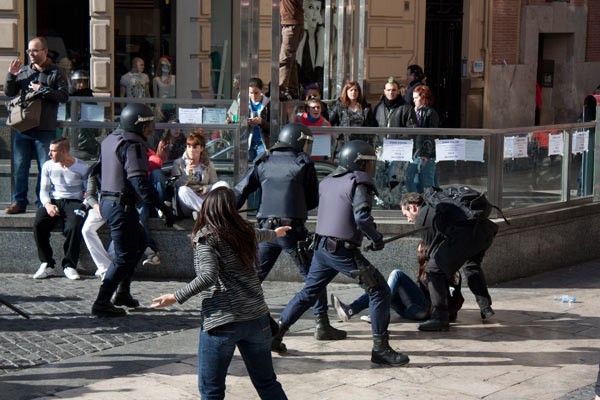 On Monday, February 20, dozens of students were arrested, hundreds had their ID cards recorded by the police and dozens of high school students and by-standers were injured as police brutally prevented them from demonstrating. The students from the IES Lluis Vives (12 to 17 year old) have been protesting against cuts in education which have left many infant, primary and secondary schools in Valencia unable to function properly, without heating, without basic materials and in some cases suffering electricity cut offs. Already last week, as they attempted to gather in a peaceful protest outside their school building, police charged against them injuring and arresting dozens of very young students.

Yesterday was just the latest attempt of the students to exercise their right to peaceful demonstration to protest not only against education cuts, but now also against police brutality and to demand their release of 8 students who have been kept in police custody since they were arrested last week. But the police in this region ruled by the right wing Popular Party was not prepared to allow them to march. As soon as they started to gather outside the IES Lluis Vives building, in the early afternoon, they were attacked by police in riot gear with batons who even used police vans to charge at them.

This clip from Catalan station TV3 shows the main events:

The police brutality affected not only students but also scores of people who were just standing nearby or passing through and who stopped to criticise the attitude of the police, shouting "you are so brave, you are hitting the kids" ("si que sou valents, que pegueu als xiquets").

Here's another video of the brutal police charge:

The regional chief of the police attempted to justify the actions of the police by describing the students as violent and describing them as "the enemy" in a press conference. The regional president Fabra accused the students of organising "violent demonstrations," and warned that they had to be stopped otherwise others would follow their example.

The images of the riot police attacking teenage students have provocked a wave of revulsion throughout the country and assemblies, rallies and demonstrations have been called in schools, universities and cities throughout Spain. The comrades of Lucha de Clases have argued that a nation-wide education strike should be called by trade unions and student organisations as an immediate response, and that if the trade union leaders are not prepared to call for it, that the initiative should be taken by rank and file militants in schools, high schools and universities to call for mass assemblies and rallies.

Valencia is one of the Spanish regions worst affected by the crisis in public finances and massive austerity cuts. The regional Comunitat government is de facto bankrupt, with an outstanding debt of 62 billion euro, and was only saved from defaulting on its debts by a special emergency loan from the national government in Madrid. In January, the regional government announced cuts worth 1 billion euro. Of those, 400 million euro cuts were in health care, 258 million in cuts in public sector workers' wages and 238 million in increased taxes.

The regional government owes every school and high school in Valencia three quarters of their running costs budget, about 50 million euro. The headmaster of a high school in Elx described what this meant for them already back in January: "our bank account is in the red, we owe three electricity bills, we have had to cancel the maintenance contract for lifts and fire extinguishers and once fuel runs out we will have no more heating". A high school in Valencia capital has had its electricity supply cut off for lack of payment and dozens of schools and high schools have had no heating for most of the winter, with students keeping their coats, scarves and hats on in the classrooms and some even bringing blankets.

This critical situation already led to a massive demonstration against cuts in education on January 21, with 120,000 students, teachers and parents marching in Valencia and Alacant. 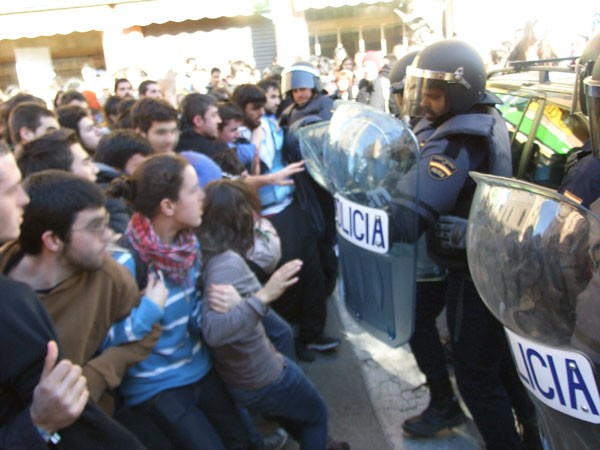 To add insult to injury, a long running court case, in which leading members of the PP party in Valencia including the former regional president were accused of a whole series of corruption scandals, ended up with all the accused being acquitted. One of the reasons why the debt is worse in Valencia is precisely the policy of irrational infrastructure spending carried out by successive PP governments in the region, all of them linked by a thousand of invisible and visible threads to local businessmen, property speculators and other unsavoury characters. The symbol of all this is the Castelló airport, inaugurated nearly a year ago, funded with 150 million euro of regional government money, which has not seen one single plane land or take off since, and which now needs a key section of the runway dug up and rebuilt because of a design fault.

The situation in Valencia is not that different to what is happening in regional governments and local authorities across Spain, where massive austerity cuts are being implemented which are seriously affecting core services like health care and education. Valencia is perhaps a bit further ahead, as the crisis there is deeper, but Catalonia, for instance, is following closely.

If you add massive austerity cuts, record unemployment levels, corruption scandals affecting politicians of the two main parties and now even the King's son in law, a judge who attempts to investigate crimes committed under the Franco dictatorship and as a result gets disbarred to the brutal behaviour of the police against teenage students, you have a powerful explosive mix in Spain. The massive demonstrations against the labour counter-reform on February 19 are just one indication of a social explosion waiting to happen.

As well as the videos above, it is also worth looking at this picture gallery from Diagonal: