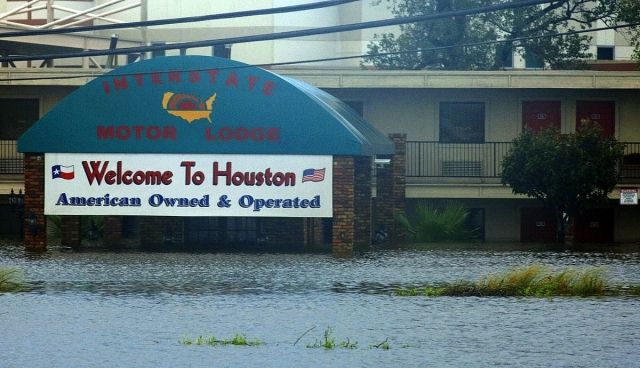 Two hurricanes have hit the US Southeast in two weeks. The total death toll has surpassed one hundred. Hundreds of thousands of households have lost everything. In the Florida Keys alone, 25 percent of all homes have been completely destroyed. Millions of lives have been ruined and many areas will never be restored to their previous level.

As always, the poorest have been hit the hardest. While the rich have the resources to rebuild, many working class people have nothing but their houses and mobile homes, most of which are not covered by flood insurance. One Houston woman from a working class neighborhood, told Democracy Now, "I can’t explain how you would feel, but I know how I feel: devastated, to know that everything that you worked for all your life is gone." Similar thoughts are doubtless going through the minds of hundreds of thousands of people. The devastation will haunt them for many years, as many poor families rely on the passing down of modest homes from one generation to another.

In Houston, the authorities excused their unpreparedness by stating that the city is not naturally prone to floods, and yet there have been two major floods since 2015 alone. Since then many people have warned of an impending catastrophe. For decades, county authorities have known that the hard soil and geographic location of the city made it prone to flooding, yet they took no action for fear of damaging rapidly rising property prices. Instead, building regulations have been rolled back on a systematic basis. Vast wetlands which otherwise would have absorbed much of the water have been drained. With all the focus on bolstering the rapid expansion of the city and its property market, the core infrastructure of the metropolitan area was neglected.

Already in 1996, a report by Harris county engineers warned that two huge Houston water reservoirs, if not upgraded, could someday exacerbate flooding.  And that is exactly what happened this time, when the authorities were forced to open the reservoirs and send huge torrents of water into neighbouring areas. In general the whole infrastructure of Houston county is in dire shape due to chronic underfunding.

In Florida, the state had boasted that after Hurricane Andrew in 2002 it was prepared. But this evades the fact that the evacuation carried out in advance of the hurricane was left almost wholly up to the population itself. Incredibly, the state did not organise public transport, and trains and planes were quickly sold out, leaving the most vulnerable to fend for themselves. Looking to make a quick buck, some airlines raised ticket prices by up to 600 percent!

With shelters quickly filling up, thousands had to find alternative solutions, but most hotels were immediately booked up. In Tampa Bay, one of the fastest growing metropolitan areas of the US,  which luckily avoided the worst damage by Irma, a recent FEMA study shows how a storm could result in an incredible amount of destruction, leaving up to two million people in need of medical attention. Recent models indicate that these reports underestimate the real situation. Democratic Tampa Mayor, Bob Buckhorn, in a momentary lapse of honesty, revealed “We’re a low lying area, a city on the water with 100-year-old infrastructure and 2017 growth patterns.” Yet Buckhorn has spent pennies on infrastructure compared with what is spent on driving the property and consumer market of the city.

The media have been quick to praise the response of the state, as compared to its response to Katrina, but this is hiding the truth. The fact is that the authorities only carried out a bare minimum of their tasks, while a large part, if not the main part, was left to teams of volunteers carrying out rescue missions as well as organising the cleanup after the event. Only a few days before, the Trump administration was proposing to cut $876 million from the Federal Emergency Management Agency’s disaster relief account, which is already scraping the bottom of the barrel. The money was supposed to be used as part of the downpayment for Trump’s promised wall on the US-Mexican border. In August, Trump also repealed the meager flood protection regulations that had been introduced by the Obama administration. Last week, the administration did a U-turn and raised FEMA funding by $15 billion. But according to former FEMA head, James Lee Witt, FEMA “would be lucky if [this money] lasts 30 days."

Meanwhile, a section of the US ruling class continues to deny the reality of climate change. Schools in many states, including Florida, have opened up their curricula to theories which advocate these views. In 2015, the Florida Center for Investigative Reporting revealed that state employees had been discouraged from discussing climate change. Seeing the effect it would have on regulations, infrastructure budgets and thereby the property market, these ladies and gentlemen would rather ignore this problem until they have cashed in their cheques. The liberals, of course, have been on their high horse, blaming these disasters solely on climate change. If only Trump had not pulled out of the Paris Climate accord, everything would have been different! But they never explain how climate change accords are to be enforced in a system where the individual drive for profit sets the agenda for all production. In the end their solution boils down to blaming working class people for not consuming the “right” kind of products, i.e. the expensive ones. But by focussing so much on this issue, they are trying to cover up other very important questions: Why do such disasters have the effect they do and why are millions of people subsequently condemned to lower living standards for decades?

Of course, the climate is changing. To deny this is to deny reality. The real problem is that capitalism is neither able to take the measures necessary to avert the changes taking place, nor is it capable of adapting to the changing circumstances. This is clearly revealed by these recent disasters. The fact is that the richest and most powerful power ever to have existed on earth is rotting from the inside out. A 2017 report by the American Society of Civil Engineers gave the US infrastructure a damning D+ grade. The same group estimates that it would cost $4.59 trillion by 2025 to get the country up to what it considers a “B” grade, considered “adequate for now.” President Trump has pledged to invest a paltry $1 trillion in infrastructure. Yet even this programme is merely a cover for an enormous privatisation plan which is sure to fragment and further undermine the already wretched state of the country’s infrastructure.

The quest to keep up property prices, the stock market and other get-rich(er)-quick schemes dominates the agenda of the US capitalist class. This class, which in the period of its ascension looked decades and even centuries ahead, today is only capable of thinking of the economy in terms of days and weeks—at most until the next quarter. Companies are not valued according to their long-term productive value, but according to how much they can push up their stock prices—something which for the most part has little to do with their actual productivity. The crushing domination of the stock market ruthlessly distorts the most elemental foundations of modern society, such as manufacturing and infrastructure. Why waste money on infrastructure to secure the future of the next generation when your main aim is to make the highest possible profit in the next few months?

The political life of the ruling class necessarily reflects the same process. The trench warfare in Congress is partially a reflection of this and Donald Trump himself personifies the same process both in the economy and the political field. Many liberals and mildly intelligent elements of the ruling class can see how this unhindered looting is undermining the ruling class’s long-term position. It is not only undermining its economic base, but also the legitimacy of the capitalist system itself. But they are impotent to act, and the reason is clear: Capitalism cannot be regulated or controlled. It is a system based on the anarchic laws of the market, driven by the private quest for profit. In its ascendant phase, the American ruling class pushed the system forward, but today it has become the main force pulling it down.

There is nothing natural about the material effects of these disasters. The productive capacity exists to easily modernise US infrastructure and housing, thus minimising the risk of death and destruction. The same productive capacity, were its potential fully realized, could easily restore the livelihoods of the people affected. But capitalism is incapable of this. Only a planned economy, owned and democratically controlled by the working class, could utilise these powerful forces of production for the benefit of society. The ruling class is incapable of guaranteeing even the most basic upkeep of society. Increasing layers of the population are becoming aware of this. All of this is preparing the reawakening of the American working class as a revolutionary force in a scale never before seen in history.