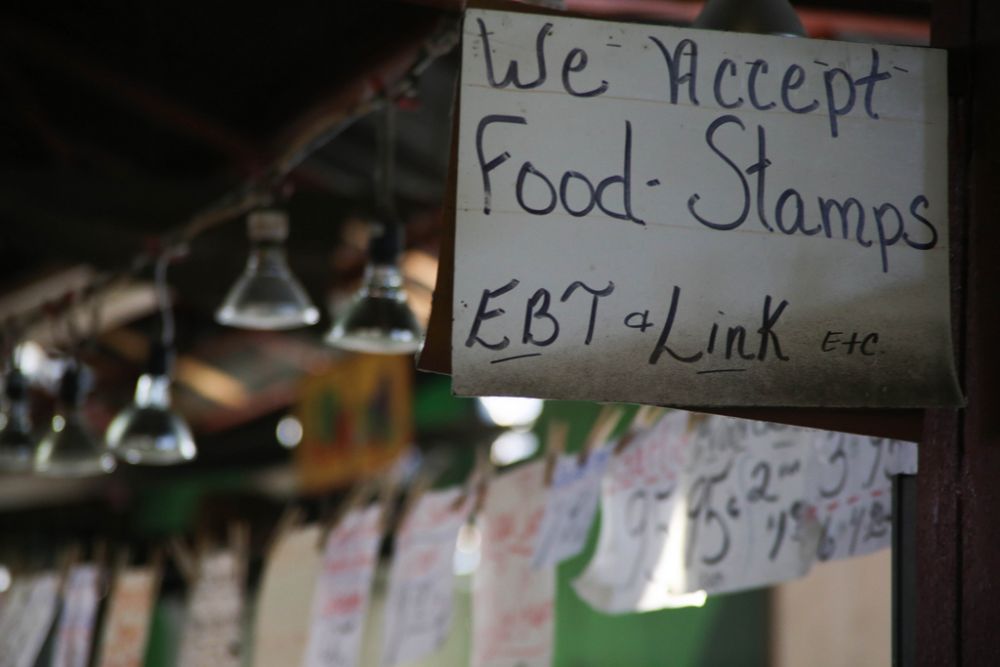 Earlier this year, the Trump administration laid out its proposed 2019 budget. Although it sets out increased spending to address the national opioid epidemic, it includes drastic cuts to national public assistance programs such as SNAP (food stamps), Medicaid, and Section 8 public housing. This will strike a major blow at millions of families whose main source of security is through Electronic Benefit Transfer (EBT) and other forms of public assistance. Given the stricter eligibility guidelines and $213bn in cuts over the next ten years—30 percent of current levels—some four million Americans will immediately lose access to SNAP benefits.

Instead of providing a certain amount of money per month on an EBT card, millions will receive half their former benefits in the form of a “USDA foods package”, which will include “shelf-stable milk, ready to eat cereals, pasta, peanut butter, beans and canned fruit and vegetables”. The government claims they will thereby be able to meet the food needs of the poor at a significantly lower cost than SNAP recipients currently pay at retail stores. Ironically, this is a distorted confirmation that, by cutting out the private profit motive, the state can provide services more cheaply than private enterprise. But under capitalism, the service and quality are atrocious, and the overall aim is to underwrite the poverty wages and unemployment that plague millions under this system.

Regarding eligibility, the administration is pushing for stricter work requirements for food stamp recipients; in other words, making them work for their benefits. The USDA’s promotion of “work and self-sufficiency” is intended to compel families and individuals who depend on SNAP to join the workforce. Currently, under federal law, “able-bodied adults without dependents are restricted to three months of benefits within a 36-month period unless they work at least 80 hours per month or participate in certain educational or job-training activities”. Individual states can modify the duration and eligibility based on their own unemployment rates. But Trump’s budget would make work-requirement waivers harder to come by. In a society that cannot guarantee quality jobs for all, stricter eligibility means yet another blow to the millions unable to find a job after their unemployment benefits run out.

Republicans and Democrats line up to punish the poor

Whether or not Congress eventually approves the budget, when it comes to austerity for the working class, both major parties are aligned. As an example, Congress unanimously passed an earlier budget that included approximately $1.8tn in health care cuts, mostly targeting Medicaid recipients. Trump’s attacks on the poorest layer of society are in reality a direct continuation of Obama’s legacy in undermining the meagre welfare programs that remained after the Clinton and Bush years. Obama’s 2016 budget already included an $8.7bn cut in food stamps over 10 years. Far from being the “food stamp president”, as he was labelled by Newt Gingrich in 2011, Obama left more Americans food insecure and below the poverty line than his Republican predecessor. 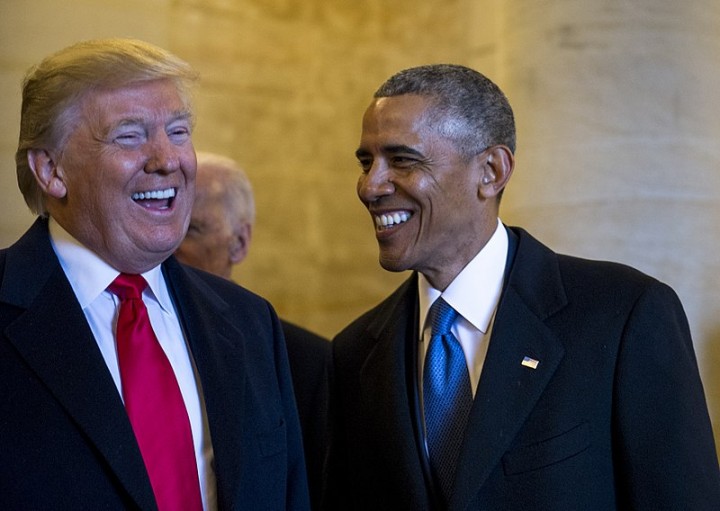 Trump’s attacks on the poorest layer of society are in reality a direct continuation of Obama’s legacy / Image: DoD

While Democrats in several states have voiced concerns over Trump’s plans to cut public assistance, the alternative they offer isn’t much different, and they ultimately advocate for reducing funding for welfare programs. Legislation such as ‘pay as you go’ allowed the Obama administration to cut out funding from public assistance in 2010. Faced with a Republican filibuster, Senate Democrats ‘compromised’ on a bill that cut approximately $11.9bn from food stamps, promising to restore the benefit as soon as the “appropriate time” came. But this was never revisited after the bill was passed. And the Healthy, Hunger-Free Kids Act, promoted by Michelle Obama, ostensibly to fight the child obesity epidemic, allowed Democrats to raid SNAP benefits again, cutting approximately $5bn, again promising that it would eventually be restored.

In fact, the Democrats and Republicans share a long history when it comes to sabotaging welfare programs. During Franklin Delano Roosevelt's administration in the 1930s and 40s, various New Deal programmes like the Works Progress Administration, which were supposedly ‘worker friendly’, were merely intended to save capitalism from itself through Keynesian methods. In many cases, jobs were cynically created during the election season, only to be eliminated afterwards. Even the Social Security Act of 1935, for which the New Deal–era Democrats take credit, would not have been won without the pressure of the mobilized and militant labour movement, which called for secured insurance after retirement.

Concessions given and taken away

Other examples of ‘welfare’ that the New Deal Democrats implemented include Aid to Dependent Children/Aid to Families with Dependent Children (AFDC). However, this ‘aid’ was deliberately kept low, and “one-half to two-thirds of welfare financing was left to states, as well as the ability to set benefits and eligibility levels”, according to Lance Selfa in The Democrats: A Critical History.

The reason states were left to decide how to determine how welfare should be funded is connected to the Democratic Party’s historical defence of the “solid South” and the bogus “states’ rights” argument that was used to preserve Jim Crow segregation laws. Low welfare benefits also meant low-wage employers. The overall result was not increased well-being for millions of families, but permanent impoverishment and dependency. Roosevelt himself stated that welfare was “a narcotic, a subtle destroyer of the human spirit”. Socialists would agree, in the sense that we demand, not ‘handouts,’ but quality jobs, healthcare, housing, education, food, and more for all. 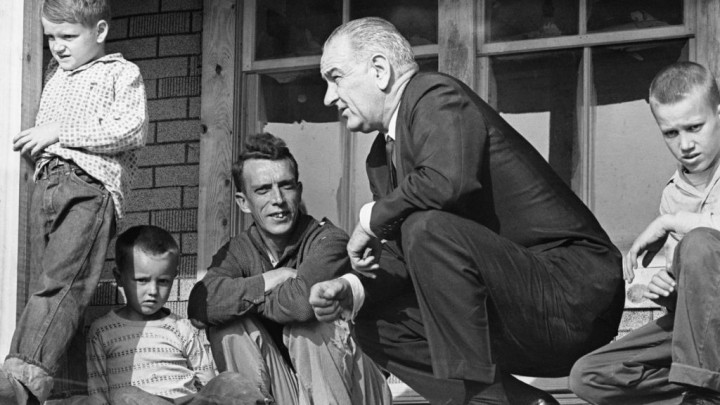 Johnson’s postwar social programs came with strings attached and helped create a distinction between those who 'deserved' welfare because they 'worked hard,' and the 'lazy poor' who did not / Image: public domain

With the postwar economic boom, American capitalism was able to provide further concessions, especially with Lyndon Johnson’s “Great Society” and “War on Poverty” programs. But similar to the New Deal’s programs, these came with strings attached and helped create a distinction between those who ‘deserved’ welfare because they ‘worked hard,’ and the ‘lazy poor’ who did not. Postwar welfare programmes included the creation of medical assistance for the elderly (Medicare) and the poor (Medicaid) and Food Stamps under John Kennedy in the 1960s. Similar to what they had done in the Great Depression era, the Democrats used these crumbs to bring the workers’ movement to heel and to prevent the civil rights movement from going down the road of revolution.

Given the economic expansion in American capitalism, they could afford a few minor concessions. However, the economic crisis of the 1970s led to massive cutbacks which have only intensified ever since.

Thanks to the open reactionary policies that the Republicans implemented under Ronald Reagan and George Bush Sr. on public assistance and welfare, the Democrats were able to pose as “friends of the working class and the poor,” while themselves implementing anti-worker and anti-poor policies, especially under Bill Clinton. The Welfare Reform Act of 1996 eliminated much of the AFDC’s cash assistance program and introduced TANF (Temporary Assistance for Needy Families), which includes SNAP Food Stamps. Clinton claimed this represented the “end of welfare,” arguing that by implementing work requirements and limiting access to public assistance, the unemployed would be “motivated” to go out and get jobs—jobs that simply don’t exist. 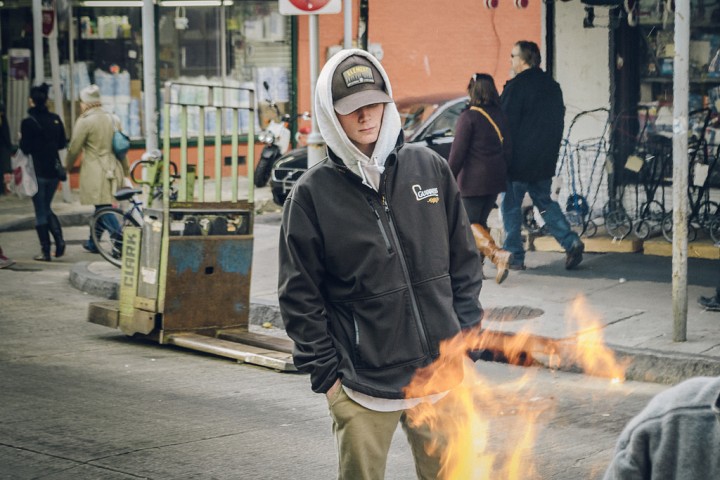 While the workers’ standard of living is driven down, the capitalists have only accumulated more wealth / Image: Flickr, thejaan

Especially since the 2008 crash, the American ruling class has been unable to maintain postwar reforms such as public assistance. Trump’s plan to attack welfare is merely an intensified continuation of the “welfare-to-work” rules initiated by Bill Clinton. While the workers’ standard of living is continuously driven down through cuts in wages, elimination of pensions, and the withering away of food stamps, the capitalists have only accumulated more wealth. Capitalism is in a global crisis, and as long as the system is allowed to continue, austerity is on the order of the day.

But the workers are far from helpless. In fact, once we are organized, mobilized, and conscious of our strength, nothing can stop us. To win the quality of life we need and deserve, we should look to the example of the West Virginia teachers, who courageously fought the governor, state legislature, and even their own union leadership on the way to winning a 5 percent raise. The quality benefits, healthcare, pensions, and food security that millions enjoyed during the postwar boom came only in the aftermath of bitter and militant labour struggles in the 1930s and ‘40s. This is the way forward.

It is a clear condemnation of capitalism that 40m Americans—including 13m children—struggle with hunger in the richest country in human history. Cuts in food stamps and cash assistance will only increase the misery already faced by millions, as 59 percent of food-insecure households are currently on SNAP benefits. What the working class in the US needs is a mass socialist party with a programme that fights to end food insecurity by nationalizing the major agricultural and food companies under workers’ control, as part of a rational plan of production, distribution, and exchange.