United States
Share
Tweet
Many people are looking to the Democrats, and in particular to Barack Obama for a real change, especially when it comes to the Iraq war. But on the question of war and foreign policy, does Obama really differ from the current White House administration, or from his party mate Hillary Clinton, or for that matter, from the entire DC political establishment?

"War is politics by other means." - Carl von Clausewitz

"I am not opposed to all wars. I'm opposed to dumb wars." - Barack Obama

Many people are looking to the Democrats, and in particular to Barack Obama for a real change, especially when it comes to the Iraq war. But on the question of war and foreign policy, does Obama really differ from the current White House administration, or from his party mate Hillary Clinton, or for that matter, from the entire DC political establishment? 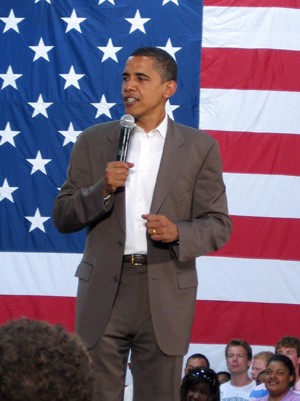 You can tell a lot about a person based on the company he or she keeps. Obama is backed by people like billionaire Warren Buffet, who has made his fortune forming and investing in companies that exploit literally millions of people around the globe. Obama's main foreign policy advisor is Zbigniew Brzezinski, a staunch anti-communist who was a key player in the U.S. support and aid to the counter-revolutionary Mujahedin in Afghanistan and Pakistan.

In a time of true Double Speak, where "democracy" means "imperialism" and "freedom" means "occupation", "reform" means cutbacks and attacks on social services. In Obama's case, "change" means the continuation of the current state of affairs. He has sung the praises of people like Ronald Reagan, who oversaw a huge expansion of the U.S. military at the expense of the standard of living of millions of U.S. workers and the poor.

When it comes to foreign policy he is a regular smoke and mirrors magician. While boasting about his tough stance against the war on Iraq, he is at pains to prove his reliability to the interests he truly serves. Far from calling for an immediate withdrawal, Obama says that U.S. forces may remain in Iraq for an "extended period of time" maintaining "a reduced but active U.S. military presence" that "protects logistical supply points" protecting "American enclaves likes the Green Zone" so that U.S. troops "remaining in Iraq" will "act as rapid reaction forces to respond to emergencies and to go after terrorists."

Obama has also suggested that he would be in favor of attacking Iran under the pretext of stopping its nuclear program:

"We should take no option, including military action, off the table, sustained and aggressive diplomacy combined with tough sanctions should be our primary means to prevent Iran from building nuclear weapons."

And on another occasion:

"In light of the fact that we're now in Iraq, with all the problems in terms of perceptions about America that have been created, us launching some missile strikes into Iran is not the optimal position for us to be in ... On the other hand, having a radical Muslim theocracy in possession of nuclear weapons is worse. So I guess my instinct would be to err on not having those weapons in the possession of the ruling clerics of Iran."

"Tough-minded diplomacy would include real leverage through stronger sanctions. It would mean more determined U.S diplomacy at the United Nations. It would mean harnessing the collective power of our friends in Europe who are Iran's major trading partners. It would mean a cooperative strategy with Gulf States who supply Iran with much of the energy resources it needs. It would mean unifying those states to recognize the threat of Iran and increase pressure on Iran to suspend uranium enrichment. It would mean full implementation of U.S. sanctions laws. And over the long term, it would mean a focused approach from us to finally end the tyranny of oil, and developing our own alternative sources of energy to drive the price of oil down."

When it comes to Israel, Obama is committed to the status quo:

"We must preserve our total commitment to our unique defense relationship with Israel by fully funding military assistance and continuing work on the Arrow and related missile defense programs."

He even goes the extra mile to show his support for the Israeli ruling class:

"We should never seek to dictate what is best for the Israelis and their security interests. No Israeli prime minister should ever feel dragged to or blocked from the negotiating table by the United States."

When pressed on comments he made about the "suffering of Palestinians" Obama makes his position very clear:

"Well, keep in mind what the remark actually, if you had the whole thing, said. And what I said is nobody has suffered more than the Palestinian people from the failure of the Palestinian leadership to recognize Israel, to renounce violence, and to get serious about negotiating peace and security for the region. Israel is the linchpin of much of our efforts in the Middle East."

Although he said he would be willing to meet with Venezuelan President Hugo Chavez, Obama has personally helped advance imperialist propaganda against the Venezuelan Revolution. He co-sponsored a resolution that urged Venezuela to re-open "dissident" radio & TV stations. Like much of the propaganda produced at the time by corporate media, the resolution blurred the issue with that of free speech:

"[The Senate] expresses its profound concern about the transgression against freedom of thought and expression that is being committed in Venezuela by the refusal of the President Hugo Chavez to renew the concession of RCTV ... [The Senate] strongly encourages the Organization of American States to respond appropriately, with full consideration of the necessary institutional instruments, to such transgression."

RCTV was not a "dissident voice". Rather, in 2002, with the backing of the U.S., the Venezuelan ruling class staged a coup in which many people died, and the democratically elected government was thrown out along with the new constitution which had been written with the involvement of millions of ordinary Venezuelans. RCTV was an integral part of the coup, intentionally broadcasting false information and helping to lay the basis for the violence that followed. In 2007, the Venezuelan government simply did not renew RCTV's license to use the publicly owned air waves. RCTV still operates on private cable and satellite feeds. Obama, however, was ready and willing to confuse the issue in the interests of U.S. imperialism.

He has also come out in favor of opening up relations with Cuba. But what does his mean in practice? He would immediately pressure the Cuban government to open up the doors to U.S. corporations and the privatization of the planned economy. And while Obama has paid some lip service to the notion of closing the U.S. detention center at Guantanamo, he has yet to sign on to any legislation that would actually do so.

Obama has also said he would use military force in Pakistan even without consent, under the guise of fighting al-Qaeda:

"If we have actionable intelligence about high-value terrorist targets and President Musharraf won't act, we will."

But he is also willing to bribe a path for U.S. interests too, as he said he would make the hundreds of millions of dollars in U.S. military aid to Pakistan conditional on following U.S. "suggestions".

On March 17th it was reported that the U.S. launched missiles in the tribal area of Waziristan in Pakistan. The strike was unannounced by the U.S. and unauthorized by Pakistan. Obama is a proponent of this very type of aggression:

"The first step must be getting off the wrong battlefield in Iraq, and taking the fight to the terrorists in Afghanistan and Pakistan."

Obama also sees no problem with the Colombian military crossing the border into Ecuador to launch an attack:

"The Colombian people have suffered for more than four decades at the hands of a brutal terrorist insurgency, and the Colombian government has every right to defend itself against the Revolutionary Armed Forces of Colombia (FARC)."

While Obama squarely blamed the FARC, he was silent on the role of Colombian government and military, the Colombian paramilitaries, and the huge sums of military "aid" that have flowed there since the 1960s. In the last 20 years, 2,574 union organizers and thousands of political activists, peasants, workers and youth have been assassinated by the Colombian government. Is this the "every right to defend itself" that Obama speaks of?

Obama also supports expanding the military. When asked if he would vigorously enforce a law that allows military recruiters on campus, Obama gave an affirmative "Yes". He goes right along with the so-called "war on terror" as a justification of such expansion:

"Our most complex military challenge will involve putting boots on the ground in the ungoverned or hostile regions where terrorists thrive." and "That should mean growing the size of our armed forces to maintain reasonable rotation schedules, keeping our troops properly equipped, and training them in the skills they'll need to succeed in increasingly complex and difficult missions."

He also voted to renew the Patriot Act, and has voted to militarize the border between the U.S. and Mexico.

Obama, who is playing on people's sincere desire for change, has taken a slightly more nuanced approach to foreign policy. Whereas Bush is only semi-coherent, Obama is capable of spinning words to soften the real role he hopes to play to keep the U.S. capitalist class dominant both at home and abroad. Fundamentally, Obama represents the same class interests as Bush and co., but is able to pass it off as though he is something fresh and new. We must understand that real change can only come through our class moving in a revolutionary direction to break the domination of the capitalists. Short of this anything else is simply a "changing" of the guard.