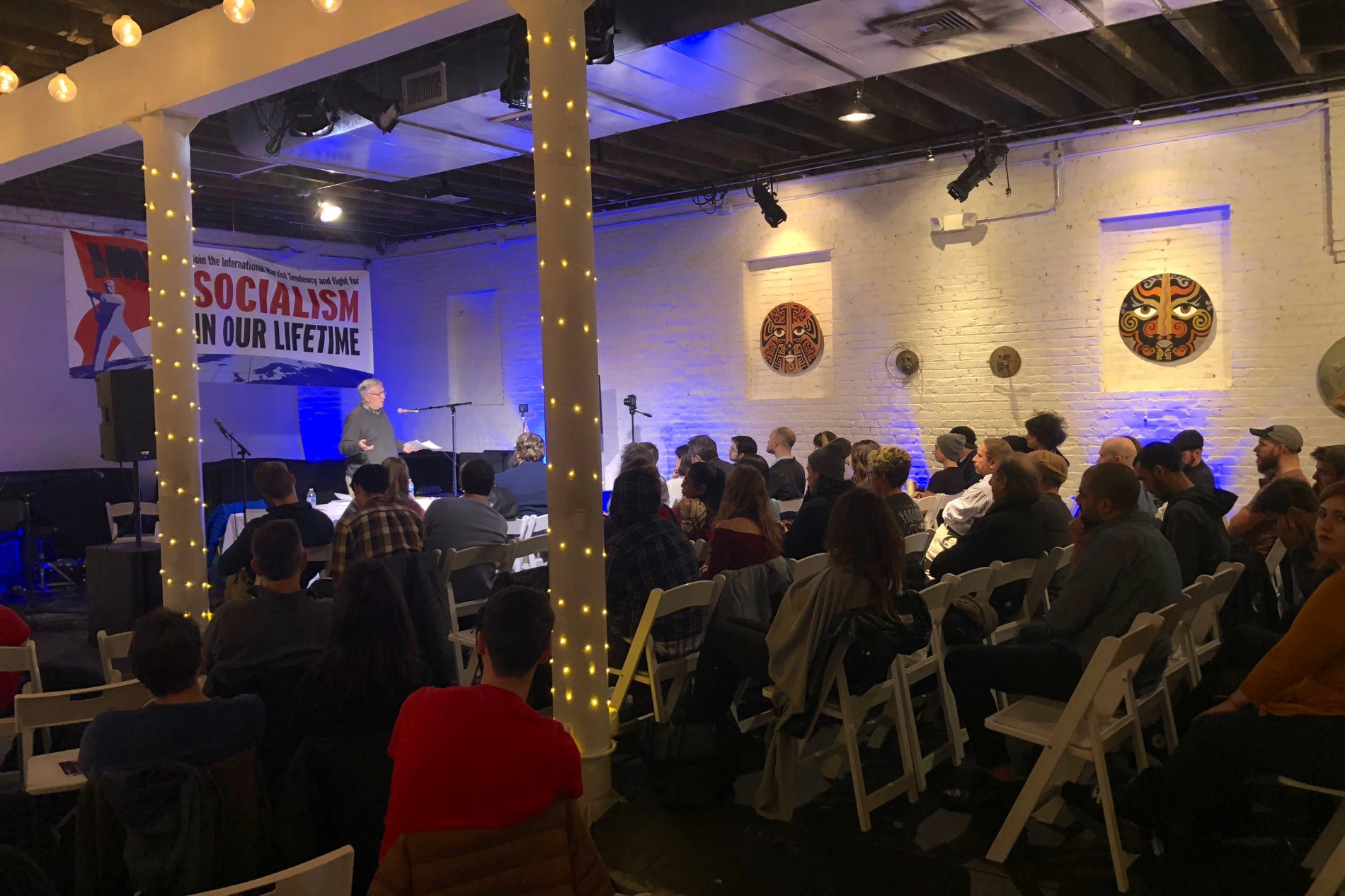 On the weekend of 10-11 November, the NYC comrades of the International Marxist Tendency hosted the 2018 Northeast Regional Marxist School. There was record turnout for an IMT event in the USA, with nearly 90 registered attendees from Boston, Philadelphia, New York, New Jersey, Pittsburgh, Washington, DC, Minneapolis, Toronto, Montreal – and London!

The weekend started with the launch of our new book, The Revolutionary Philosophy of Marxism, led off on by Alan Woods, who wrote the book’s introduction. He began by congratulating the US comrades for putting together this new collection of selected philosophical writings by Marx, Engels, Lenin, Trotsky, Luxemburg, and Plekhanov.

Quoting Lenin’s profound insight from What Is to Be Done?, Alan emphasised that “without revolutionary theory, there can be no revolutionary movement.” He outlined the historical development of Marxist theory, which unifies two great schools of philosophical thought: materialism and dialectics. He explained the Marxist worldview and why it is necessary to make the effort to study these ideas and methods. This included concepts like negation of the negation, the unity and interpenetration of opposites, understanding that everything is in flux, and the transformation of quantity into quality—and vice versa. 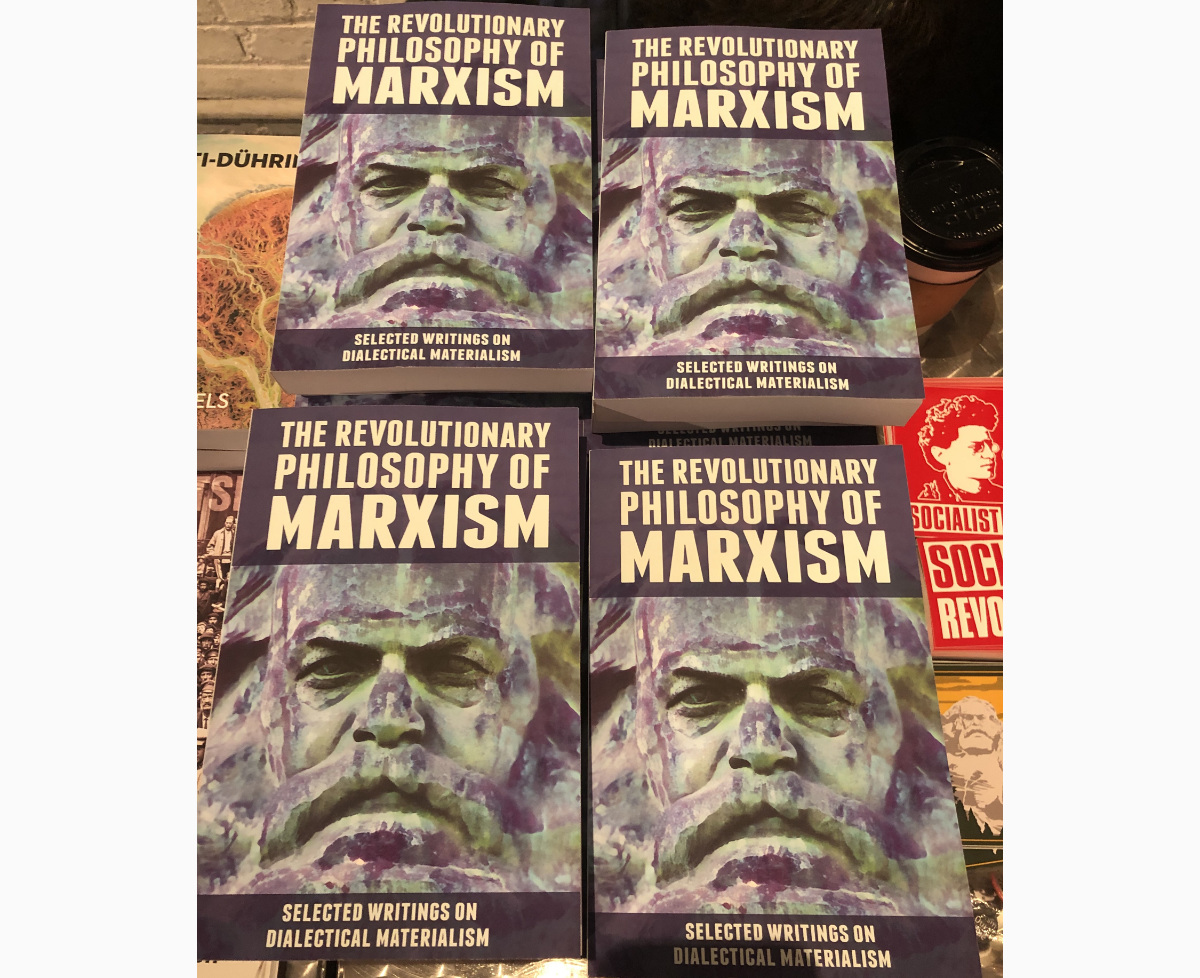 The weekend started with the premiere of our new book The Revolutionary Philosophy of Marxism, led off on by Alan Woods / Image: Socialist Revolution

There was an enthusiastic discussion on the importance of Marxist philosophy and why theory is key to building the subjective factor in order to lead the working class to victory. It was also noted that one of the main reasons for the historical weakness of the American left has been its aversion to Marxist theory and its acceptance of the empiricism and pragmatism of the ruling class. Training a new generation of revolutionaries is precisely why this book has been produced. 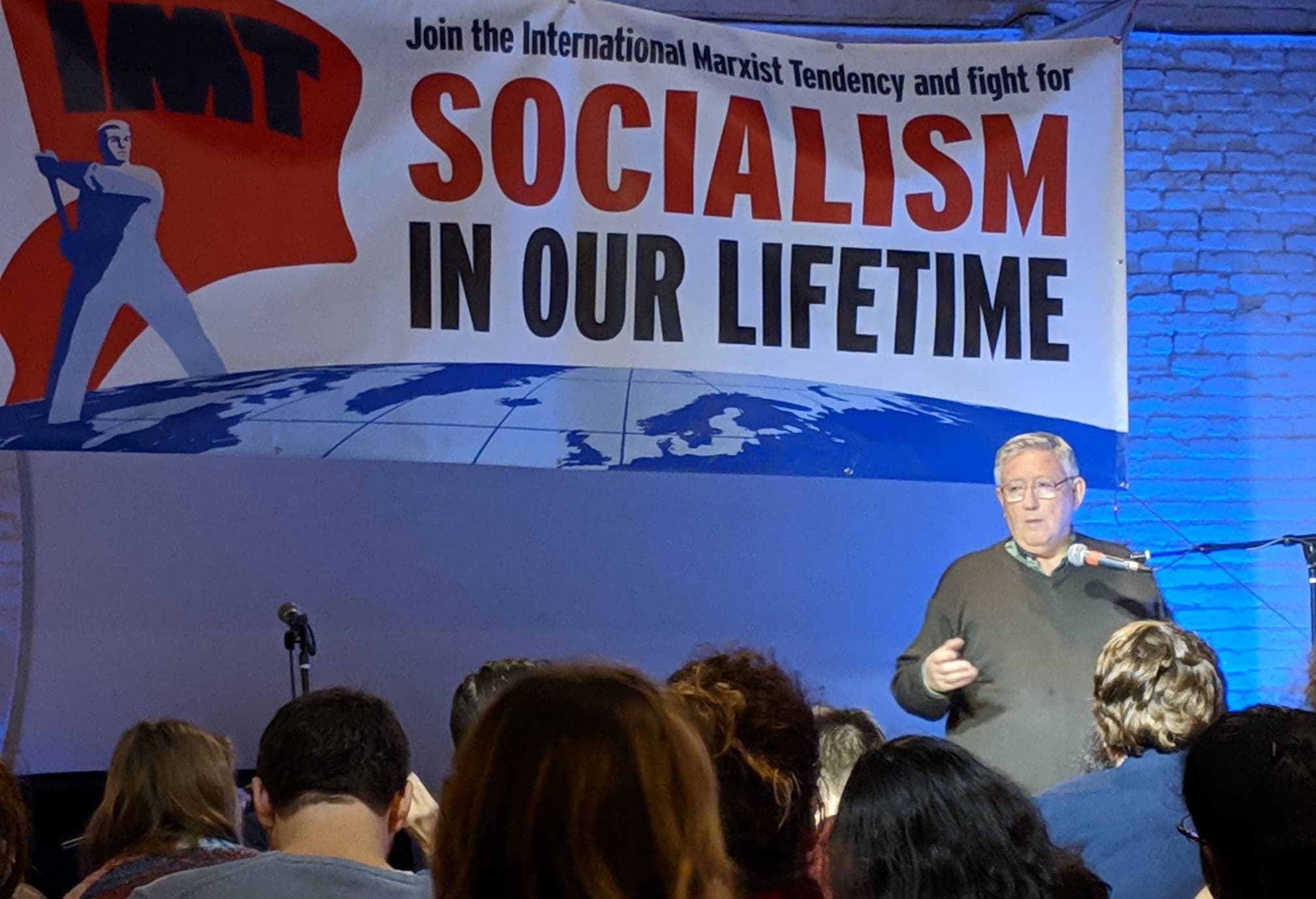 After the lunch break, Antonio Balmer, a member of the editorial board of Socialist Revolution led off on the topic of “The International Marxist Tendency: Who We Are and Why You Should Join.” Antonio also referenced the relevance of What Is to Be Done?, which has been reprinted by Wellred Books. He explained that the working class has struggled throughout history to defend its rights and has made numerous attempts to take power, however, the only time the working class was able to win and hold power was Russia 1917. This was due to the previous construction of the subjective factor—the revolutionary party.

Antonio stressed that this cannot be improvised—it must be built ahead of events. He also contrasted the methods of the IMT with the current trend of “base building,” which is in fact a modern version of the Economist trend that Lenin fought against in the early years of Bolshevism. History shows that workers can build unions, tenants’ organisations, movements, and even factory and workers’ councils without help from Marxists. However, at a certain point in a revolution, the working class needs a reference point. It must draw on the lessons of its own history in the struggle against capital, and this is where its historical memory—the revolutionary party—comes in. Without clear ideas, a correct programme, and leadership, the revolution will inevitably crash into a brick wall. This is the tragic lesson of the last 100 years of workers’ struggle. 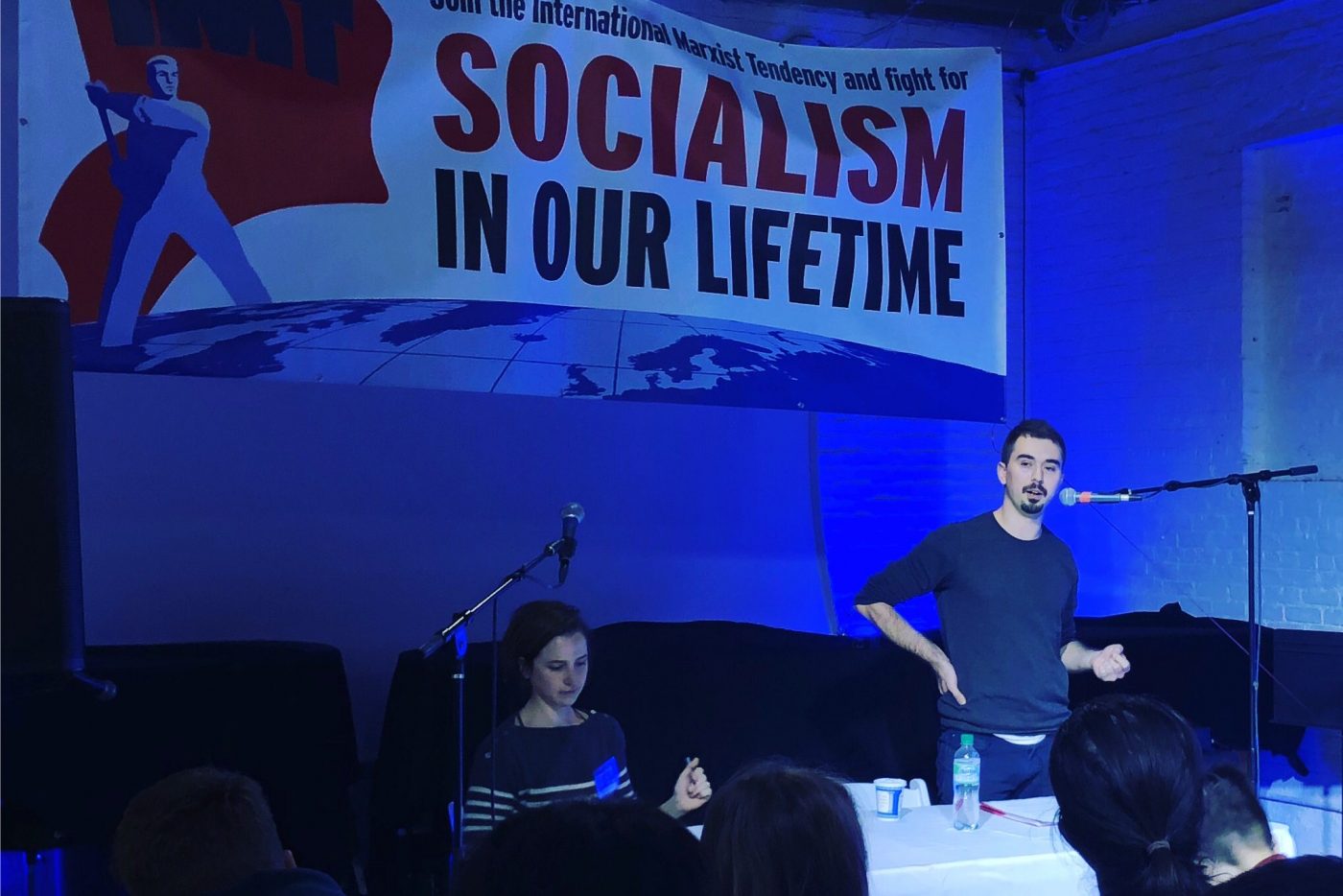 In his presentation Antonio Balmer stressed the need to build a revolutionary party with the correct ideas and programme ahead of big upheavals / Image: Socialist Revolution

In the discussion that followed, comrades brought up both historical lessons and practical experiences in building the subjective factor in the US and Canada. In the sum up, Antonio invited all those who want to build this necessary tool to join up with the Marxists of the IMT. The first day of the school was followed by an energetic evening social at the US IMT’s National Center in Brooklyn, which included vibrant discussions and the singing of revolutionary songs.

The second day of the school began with John Peterson, the chief editor of Socialist Revolution, leading off on the Mexican Revolution of 1910–1920. As the IMT builds its forces in US and Canada, comrades must not only study the class struggle in those countries, but must also understand Mexico—a key country for the socialist revolution in the Americas.

John gave a detailed overview of a complicated subject that is not taught much in the US or Canada, focusing on the role of the masses in pushing the process forward at every turn. The Mexican Revolution went through many phases, with big leaps forward and painful steps back, and saw countless heroic figures as well as snivelling betrayers. During the course of his introduction, he gave a portrait of the two outstanding leaders of the revolution, Emiliano Zapata and Francisco “Pancho” Villa. These comrades were great generals and self-sacrificing representatives of the “wretched of the earth.” They were ultimately murdered—Zapata in 1919 and Villa in 1923—and the revolution was never completed, but some concessions were won by strenuous efforts of the masses. 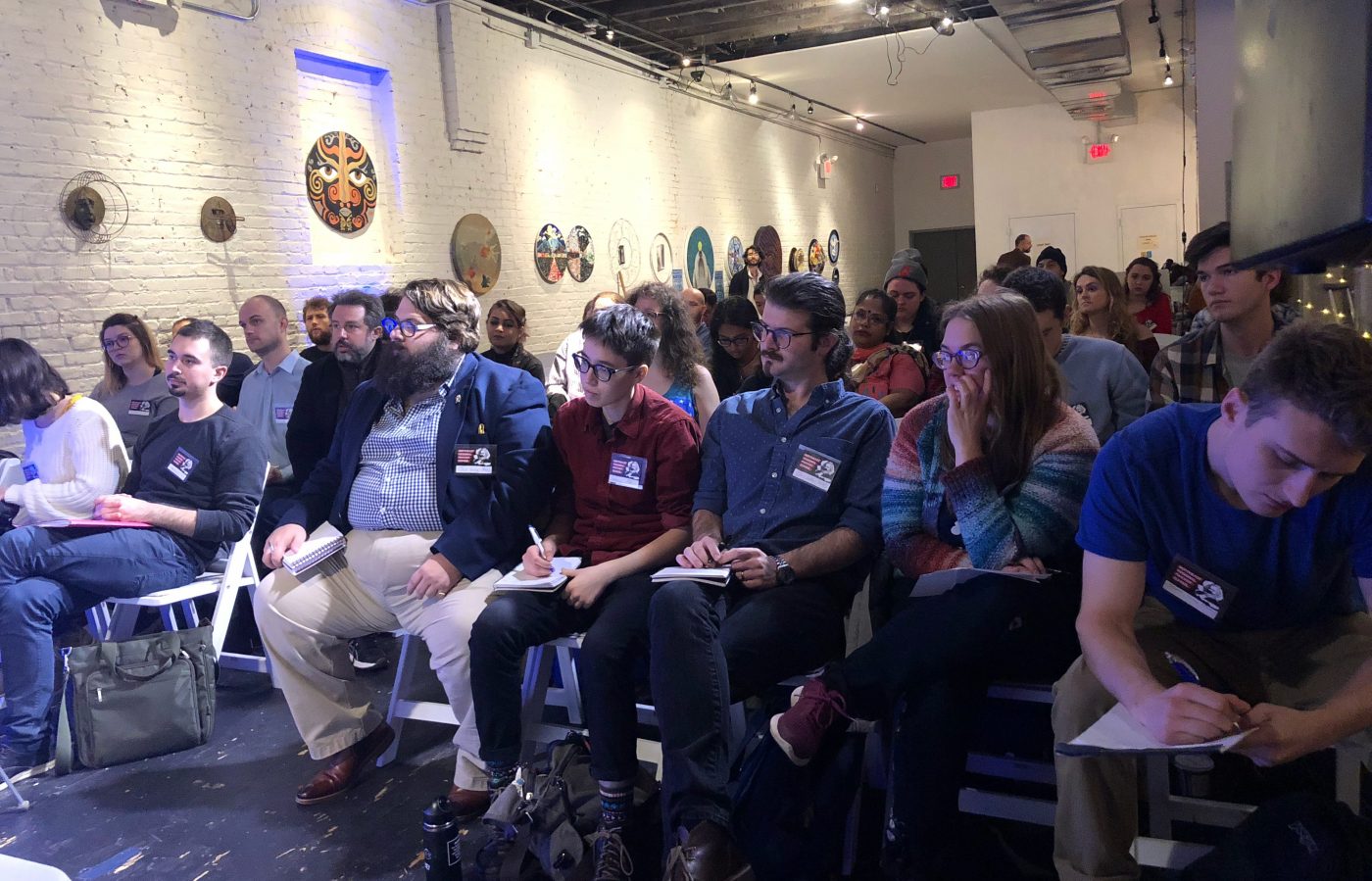 John Peterson gave a detailed overview of the Mexican Revolution of 1910-1920: a complicated subject that is not taught much in the US or Canada / Image: Socialist Revolution

John explained how, tragically, the leadership of the urban working class was not armed with Marxism. If it had been, it could have formed an alliance with Villa and Zapata—who had the revolutionary peasantry behind them—and this could have led to a different outcome. Once again, a Marxist leadership of the working class would have to have been built in advance of the revolution.

After the lunch break, Tom Trottier, also on the editorial board of Socialist Revolution, led off on “The Midterm Election and the Prospects for Socialism.” He examined how the real issues facing the working class were ignored during the campaign, while Trump and the two major parties focused on finding scapegoats for the problems brought to us by the capitalist system. Tom explained the perspectives for the American working class coming out of the recent election. It is clear that old and formerly respected institutions of capitalist rule—from the Constitution to the President, Congress, and the Supreme Court—are losing their grip on the minds of the masses and people can see how undemocratic they really are. The working class is starting to view these institutions as those of the ruling class and this is a big step forward in class consciousness. He also discussed how the election of self-described socialists to Congress is a sign of the growth in popularity of socialist ideas. Tom and other comrades also discussed how DSA is missing an opportunity and making a mistake by reinforcing illusions in the Democratic Party, a party of the ruling class, rather than striking out on its own, building its forces in a way that points the way towards a mass working-class socialist party.

For socialism in the USA!

Alan Woods then gave an inspiring final address to close the school. The path ahead is not a straight line, nor is it easy, but if the IMT comrades are self-sacrificing and take theory seriously—and our new book on philosophy is an important weapon in this fight—we will build the party needed to lead the working class to victory. The event concluded with the singing of the Internationale and Bandiera Rossa.

Overall, the school was a big success and was efficiently and professionally organised. The comrades left the meeting inspired and ready to dive into the new book, and energised to step up the important day-to-day work of fighting alongside the working class in the struggle for world socialism.