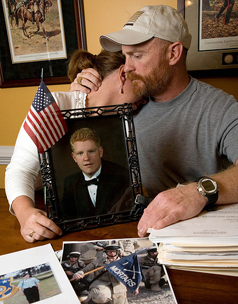 All indications are that things will only continue to get worse in 2009. As Paul Rieckhoff, director of the Iraq and Afghanistan Veterans of America pointed out, “In January, we lost more soldiers to suicide than to al-Qaida.”  By “al-Qaida” he is of course referring to combat deaths.  And he is correct!  As the Associated Press reported recently, “The count is likely to surpass the number of combat deaths reported last month by all branches of the armed forces in Iraq, Afghanistan and elsewhere in the fight against terrorism.”  One base alone, Fort Campbell, has reported that four soldiers committed suicide.

What is perhaps most disturbing is that Lt. Col. Mike Moose, who is a spokesperson for Army personnel issues, claims that, “we have not identified any particular problem.” That is to say, they have no idea why soldiers are killing themselves at such a high rate.  Perhaps, they could begin their “investigation” by addressing the fact that young men and women are thrown into an extremely stressful, unpredictable war zone half a world away, to kill or be killed by their fellow workers, often for multiple tours of duty, forcing them to abandon friends, family, jobs, etc.  However, to make this analysis would require Lt. Col. Moose and his superiors to question the legitimacy of the imperialist adventure itself, which is something they clearly cannot do.

In response to the rising suicide rates, the Army has reported that it will implement training to help soldiers recognize suicidal behaviors in their comrades, followed by a suicide prevention program that is to be applied throughout the ranks.
Dissatisfaction in the ranks is currently finding expression in acts of desperation, in suicide, which appears to many of these soldiers as the only escape from the nightmare of war and constant deployments.  However, the solution to this crisis is not to be found solely in suicide education campaigns or psychiatric visits, as necessary as these may be in the near-term, but rather in ending the source of the problem, the imperialist wars themselves.

After years of declining recruitment numbers, largely due to dissatisfaction with the Iraq War, we are now seeing an increase in enlistment into the armed forces, as unemployment soars and young people struggle to find gainful employment.  With the stepping up of the conflict in Afghanistan and Pakistan, the issue of imperialist war and the need to struggle against it is not going away.

We also need to keep in mind that these new recruits are not the same young people who signed up for duty after the 9/11 attacks. In many cases, this wave of soldiers signed up out of honest commitment to a vague, patriotic mission to “eradicate terrorism.”  Increasing numbers of today’s enlistees are young people forced by economic necessity to join the military. They are part of a generation that has grown up under the shadow of and whose consciousness has largely been shaped by the so-called “War on Terror.”  Many of them are personally opposed to these wars, but have no alternative but to sign up. At a certain stage, this will lead to an inevitable sharpening of the class struggle within the armed forces themselves.