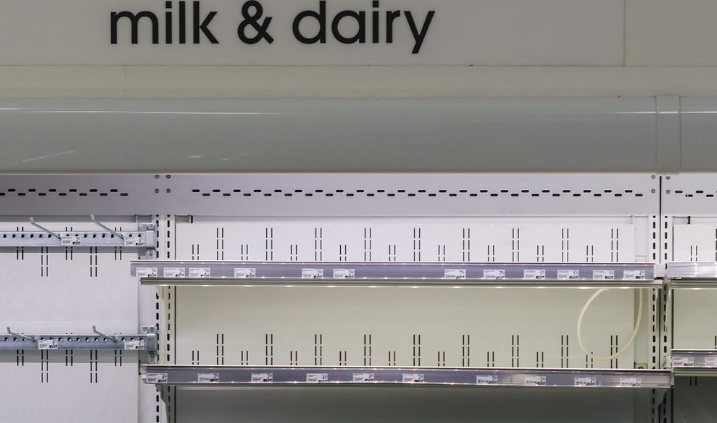 In the midst of the COVID-19 pandemic, millions tried to prepare for social isolation like they would for a blizzard—stocking up not just on toilet paper and sanitizer, but also on pantry basics like milk, eggs, flour, and beans. Faced with this sudden surge in demand, grocery stores across the country were completely overwhelmed. Not just shelves but entire stores were cleared out, so “one-per-customer” rules were established on select items and notices were posted detailing which were out of stock. As we have written elsewhere, the capitalists can’t efficiently sustain supply chains through a crisis such as this.

News outlets were quick to reassure the public that there is no shortage of food in the US. The US is the third largest agricultural producer in the world, after all. Yet food banks are unable to keep up with the increase in demand due to the tremendous spike in unemployment, and many food banks have shut down completely.

At the same time, “hundreds of millions of pounds” of food are being dumped, buried, and incinerated, according to the New York Times. In particular, fresh fruit, dairy products, and poultry have been wasted in high enough quantities to raise alarms. With schools and many restaurants shut down, their food suppliers no longer have that business. Those producers have opted to destroy food instead of distributing it to where it is needed, since they can’t sell it for a profit. Demand from the commercial food industry has gone down and the demand for the consumer industry—grocery—has gone up, as have prices. As always, the result under the “free market” is total chaos and eye-watering waste.

The supply chains for commercial and consumer food industries are largely separated, since on the commercial side everything is packaged in bulk, for restaurants and schools, and consists of less-processed “ingredients” and fresh produce. The “consumer” food industry is dominated by processed or semi-processed foods, and pre-prepared individually packaged microwave meals, catering to the vast majority of grocery shoppers: the overworked, tired proletariat. 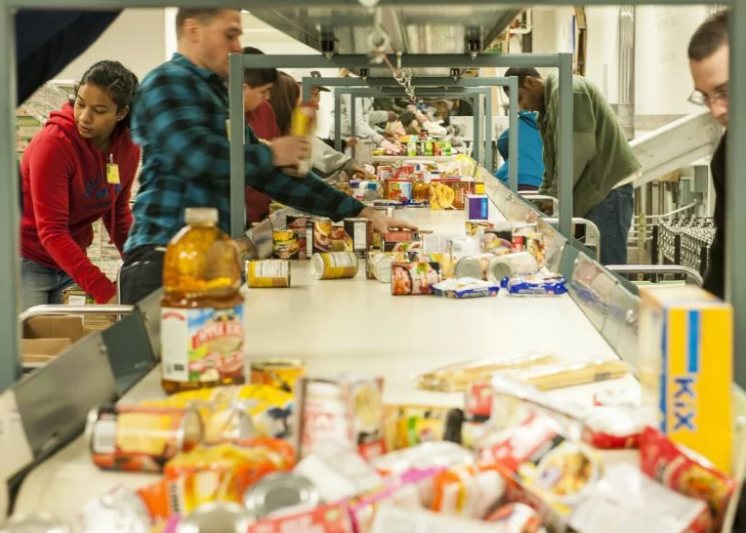 Food banks are unable to keep up with the increase in demand due to the tremendous spike in unemployment, and many food banks have shut down completely / Image: public domain

The nurses working double shifts, the single mother breadwinners who can’t afford childcare, the retail workers taking night classes—all those who do not have time or energy during their days to prepare fresh, healthy meals, don’t have a lot of options. So fresh produce demand has dropped, and much of the harvest was diverted from the “fresh” to “frozen” production line. In the absence of a rational plan, this is hardly a smooth transition.

As a result, food is being routinely dumped by the ton because it cannot be sold at a profit. New York Times reported that a single farm dumped 31,000 pounds of milk, or about 3,600 gallons, into a lagoon. But even before COVID-19, some 150,000 gallons of milk were dumped every day across the US—all to keep prices high.

Meanwhile, before the pandemic, 11% of households were “food insecure” at some point during 2018, and 23.5 million people live in “food deserts,” meaning they live at least ten miles away from a supermarket. These families now face even harsher challenges, with food banks underprepared and nearby restaurants closed. Millions of people, including millions of children, are quite literally going hungry in the richest country in the world.

The simultaneous problems of food waste and shortages, the contradictions of overproduction and hunger amidst plenty, were well known long before the novel coronavirus virus showed up. But the crisis has deeply exacerbated since the pandemic broke out. In the Communist Manifesto, written over 170 years ago, we find the following prescient lines:

In these crises, there breaks out an epidemic that, in all earlier epochs, would have seemed an absurdity—the epidemic of overproduction. Society suddenly finds itself put back into a state of momentary barbarism; it appears as if a famine, a universal war of devastation, had cut off the supply of every means of subsistence; industry and commerce seem to be destroyed; and why? Because there is too much civilization, too much means of subsistence, too much industry, too much commerce.

The working class, which makes up the vast majority of the population, can never afford to buy back everything it produces. This is the fundamental contradiction of capitalism. Workers sell their ability to work for less than the value of the commodities they produce. The difference between the two is the surplus value—the one and only source of capitalist profit.

In addition, meatpacking plants have become cluster sites for the spread of the virus, with low-wage essential food production workers crowded “elbow to elbow” without sufficient PPE to keep themselves healthy. They are unable to shelter in place due to their essential status, and packed with hundreds of others in unsanitized cafeterias. In order to keep up production, these plants have neglected to inform employees of known COVID-19 cases among their ranks, with many shutting down only after there has been an outbreak. Many of these workers are immigrants and will not be receiving a stimulus check. So to feed and shelter their families, they must expose themselves to the virus and possibly infect others. This has led many workers to draw the following conclusion: “They don’t care about employees, they only care about their money.” 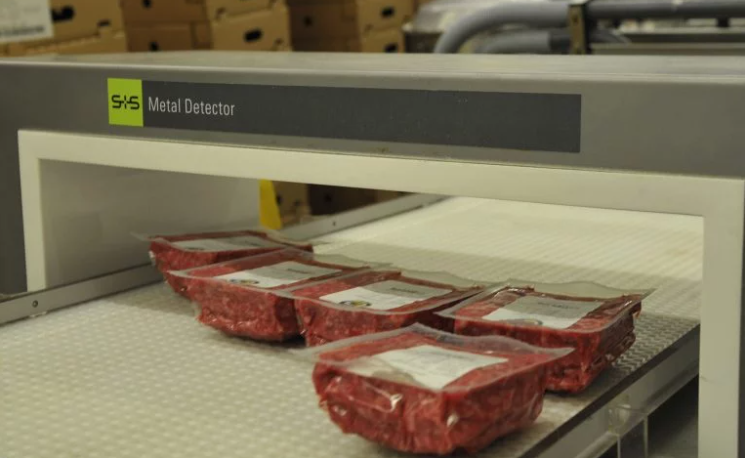 In addition, meatpacking plants have become cluster sites for the spread of the virus, with low-wage essential food production workers crowded “elbow to elbow” without sufficient PPE / Image: public domain

The COVID-19 virus is also hammering small farm and restaurant owners, threatening their livelihood and the livelihood of everyone they employ. The farms most affected by the dramatic shifts in the market have been given a whopping $16 billion in government subsidies. However, this mostly amounts to paying for food that has already been dumped, offers no direct assistance to the farmhands and meat packers, and there is no control over how, or whether, those billions get spent at all.

By comparison, the government is directly purchasing just over $3 billion worth of food from the overproducers in commercial agriculture, to be distributed to nonprofits and charities. This will undoubtedly provide the temporary means to survive for many. Unfortunately, this will do nothing to solve the root of the problem—capitalist overproduction and the unplanned nature of the market.

Before the country went on lockdown, 1/3 of the average US household budget went towards restaurants, and now that has completely shifted. Many small farm owners will have to sell off their land in the coming period, and 3% of US restaurants have already declared themselves permanently closed due to the crisis. The owners find themselves in the same state as much of the working class—'in too deep' for a $1,200 check to be enough to dig themselves out of impending immiseration.

While so many small businesses in the food industry are taking a mortal hit from lockdown, other companies have managed to adapt quickly to the sudden change in demand from one sector to another. An executive from the food distribution company Natoora, interviewed by Bon Appetit, explained that over 200 restaurants they delivered produce to in NYC before the COVID-19 lockdown have closed up shop, at least temporarily. The company had been able to transfer those deliveries to residences instead—but not to the food banks that are struggling. 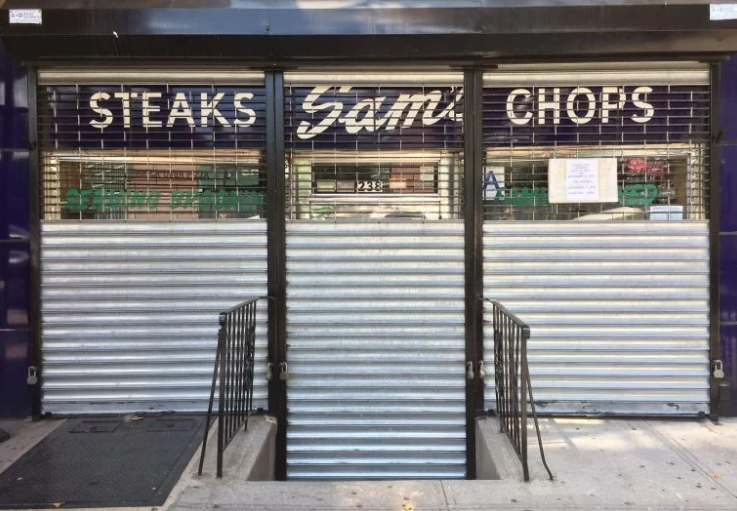 Due to COVID-19 hundreds of restaurants have closed up shop, at least temporarily / Image: Flickr, Nick Sherman

This shows that a wholesale transition in how, where, and when food is distributed would not be that difficult, and could be coordinated on a national and international scale. The technology, infrastructure, and labor force exist—the only barrier is the profit motive and competition between firms. This logic applies in the reverse direction as well. The setting up of large canteens serving fresh, healthy meals in large quantities in working-class neighborhoods could be accomplished in a matter of days or weeks.

All of this, however, requires a rational plan of production. The benefits to society of such an approach would be immeasurable. Take, for example, the negative effects capitalist food production has on the environment. Waste would be reduced drastically, if not eliminated altogether, and restorative technologies could be rapidly implemented to dramatically lower CO2 levels.

In addition, removing the burden of meal preparation as part of the “second-shift”—which falls primarily on working-class women—would go a long way towards our emancipation from oppression. And rational management of animal agriculture could prevent pandemics like COVID-19 from happening in the first place, or slow their spread for rapid containment whenever new diseases do spread to humans.

But none of this is possible under capitalism. Only by nationalizing the major food production and distribution corporations, to be operated under democratic workers’ control, can we ensure that high-quality food is available for all, whenever and wherever it is needed.