On 27 June, 53 immigrants from Mexico, Guatemala, and Honduras died of heat stroke in the back of a tractor trailer in Texas, 150 miles north of the US-Mexico border. Another nine people in the truck, including children, remain hospitalised. These 62 people, who left home looking for a better life, spent hours and were eventually abandoned in an unairconditioned metal box in over 100F heat with no water.

As horrific as this incident is, it is not an isolated case. Eighteen migrants in 2003 and 10 in 2017 died in the exact same way. So far this year, 290 people have died attempting to cross the US-Mexico border. Internationally, tens of thousands have died over the past two decades attempting to cross the Mediterranean Sea from North Africa. A few months ago, 27 migrants drowned while trying to cross the English channel. Just two weeks ago, border police brutally attacked hundreds of North-African immigrants, murdering nearly 40, as they attempted to climb the Spanish border fence in Melilla.

These tragedies can be summed up by Lenin’s famous description of capitalism: horror without end. The leading causes of migration include poverty, violence, political instability, various forms of persecution, and climate-related displacement—all of which are, directly or indirectly, the product of capitalist exploitation and imperialist domination. The people facing these atrocities are then forced to choose between two equally dreadful options: attempting to cross borders legally and risk being sent back to the conditions they were trying to escape; or hiring a smuggler to enter the country illegally, despite the potentially deadly consequences. No human being should have to make this impossible and unnecessary choice. 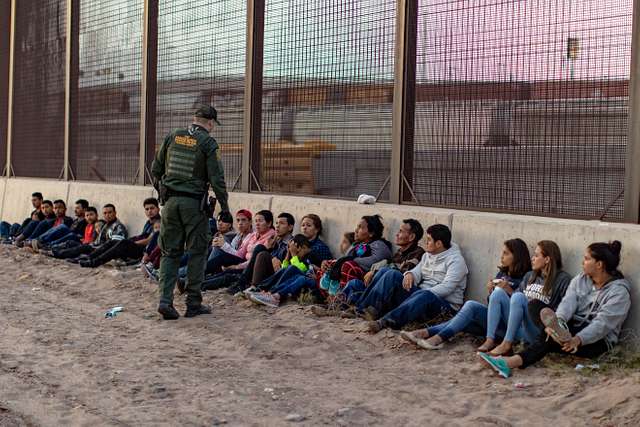 The leading causes of migration are all, directly or indirectly, the product of capitalist exploitation / Image: Public Domain

While politicians from both capitalist parties have sent their warmest sentiments to the victims in Texas and their families, they have done nothing to prevent tragedies like this from happening and are ultimately to blame for these deaths. The immigration system at the US-Mexico border is a house of horrors, with inhumane conditions in detention centers, non-consensual medical procedures, and kids still in cages long after Joe Biden took office. Even those seeking asylum, who should theoretically be allowed into the country for their safety, are frequently sent back home, especially during the pandemic. In March 2020, Trump invoked Title 42, a code to legally turn away asylum seekers for public health reasons, and 1.8 million asylum seekers have been turned away under this code so far.

But for the ruling class, immigrants are nothing more than a political tool used to divide the working class and drive down wages. Undocumented workers are subject to the most miserable conditions, leaving them vulnerable and desperate to accept less than minimum wage. At the same time, the threat of replacement by cheaper labor is used to force all workers to accept lower wages. Rather than blaming the bosses who keep wages low for everyone, politicians use this as an opportunity to whip up nationalism and xenophobia by blaming immigrant workers for “taking our jobs.” They frame immigration as “us versus them,” with “Americans” on one side and “immigrants’ on the other. The scapegoating has gone as far as to blame immigrants for the recent baby formula shortage!

Despite their “thoughts and prayers,” the ruling class and their political representatives will never do anything meaningful to prevent these tragedies from happening. Nor can their system, based on the nation-state and competition in the market, resolve the fundamental causes of mass migration. Only the organised working class can stand up to defend ourselves and our international siblings.

As socialists in the US, we must organise around a program that fights for an independent working-class party. Such a party should clearly explain that there is more than enough wealth in society to guarantee a good standard of living for everyone—regardless of national origin—but only if it is taken from the hands of the capitalist parasites who profit from our labor.

As Marxists, the only “us versus them” we accept is the irreconcilable division between the workers and capitalists of all countries—the division between the exploited and the exploiters. We stand with the international working class, and recognise the 53 migrants who died in Texas as victims of capitalism. The only way to end this nightmare is to end the system that breeds the horrific conditions of life forcing millions to migrate in the first place, and which enforces deadly immigration systems. We invite everyone who wants to be a part of this struggle to join us in the fight against capitalism.