Share
Tweet
On the weekend of May 17 and 18, nearly 30 members of the Workers International League gathered in Minneapolis, MN for the WIL National Congress, the most important event in the political life of the organization. Comrades were present present from Portland, San Francisco, Minneapolis, Madison, St. Louis, Nashville, New York, Pittsburgh, Providence, and Washington DC. 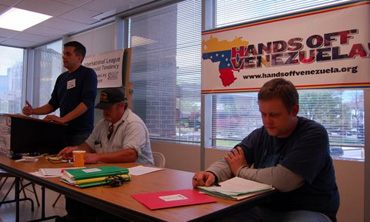 On the weekend of May 17 and 18, nearly 30 members of the Workers International League gathered in Minneapolis, MN for the WIL National Congress, the most important event in the political life of the organization. Comrades were present present from Portland, San Francisco, Minneapolis, Madison, St. Louis, Nashville, New York, Pittsburgh, Providence, and Washington DC.

Comrades came together to discuss the International Marxist Tendency's (IMT) draft World Perspectives document [Part 1 and Part 2], a draft U.S. Perspectives document, to hear reports on the work of the IMT, as well as discussing the important question of Black Struggle and the Socialist Revolution as well as the perspectives for the Labor movement, and the WIL's organizational targets for the coming period. A financial collection was held to help develop the work in the coming period, smashing all previous records, a reflection of the comrades' enthusiasm to build the WIL.

The discussion of world Perspectives was wide-ranging. From the world economy to the events of the last few months in Pakistan; from the French elections to the crisis of the Prodi government in Italy; from the situation in South and Central America to the recent strike wave in Egypt, comrades intervened with many interesting facts and ideas that point to the inescapable conclusion that what we are discussing is the world crisis of capitalism and the world revolution. 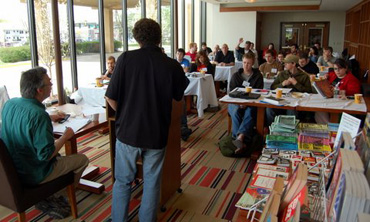 The U.S. Perspectives discussion focused above all on the economy, the Iraq War and anti-war movement, and the upcoming Presidential elections. The divisions in the anti-war movement were discussed, as well as the WIL's participation in the National Assembly to end the war now, a broad-based, democratic effort to unite the movement in order to build mass, politically-independent mobilizations around the demand “Out Now!” On the elections, the WIL has yet to determine which candidate, if any, it will support, but one thing is clear: it will not be a Republican or a Democrat, as both these big business parties do not represent the working class. The main conclusion drawn is that as the economy worsens, the war drags on, and illusions in the Democrats are dashed by bitter experience, increasing numbers of American workers and youth will be open to the ideas of revolutionary Marxism. Our task is to strengthen the forces of the WIL in preparation for the momentous events that history is preparing for us, right here in the “belly of the beast.”

The discussion on Black Struggle and the Socialist Revolution was also lively and wide-ranging, covering everything from the history of slave struggle and the aftermath of Katrina to Affirmative Action and Black Nationalism. The main conclusion drawn is that black workers and youth, as a super-oppressed layer of U.S. society, will play a key role in the working class' united struggle for the revolutionary transformation of society.

The discussion on the trade unions was also important, emphasizing the key role of the unions in a country that does not yet have a mass party of labor, and the need for the unions to break with the Democrats and form such a political party. The unions have been under attack for nearly three decades, yet there are pockets of discontent developing. The magnificent movement of mostly undocumented immigrant workers was also discussed. In the coming period, open clashes of the class struggle will be on the order of the day, which will shake the unions and their leadership from top to bottom. 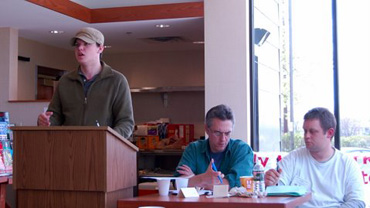 The WIL's organizational and financial goals flow from our political perspectives. Our main organizational targets are to continue strengthening existing branches and to build new ones where we are not yet present. We have built a solid nucleus of cadres and must now transform that quality into quantity. Strengthening the finances and increasing the number of full timers is also a priority. All documents and targets were approved by the Congress. The U.S. Perspectives and document on Black Struggle and the Socialist Revolution will be available online soon.

In addition, a public event was held at the Minneapolis Central Labor Union Council. Click here for a report and video of a speech by Jorge Martin, International Secretary of Hands Off Venezuela. As always, the Congress ended with the singing of The Internationale, and this year, also with Bandiera Rossa.

The U.S. sympathizing section of the IMT has come a long way in just a few years. From its founding Congress in St. Louis' Preservation Hall (with just five comrades present), to establishing the beginnings of a truly national organization, with offices in Minneapolis, a regular paper, the production of two books (Marxism and the USA and Four Marxist Classics), and energetic participation in the anti-war, immigrant rights, Latin America solidarity, and other movements, the foundations have been laid for a strong Marxist tendency in the U.S. We invite our readers to contact us for more information on working with and joining the WIL.