Share
Tweet
The US Navy will be sending four ships, one of them carrying 60 fighter planes, and a total of 6,500 soldiers on a major military exercise in the Caribbean starting in the next few weeks. This can only be interpreted as a threat and as a concrete preparation for future military intervention against the Venezuelan relvolution.

According to a press release by the US Southern Command on Monday, March 27: "A U.S. Navy Carrier Strike Group will deploy from the U.S. east coast to the Caribbean Sea to conduct Operation Partnership of the Americas from early April through late May 2006." The strike group will be composed of "aircraft carrier USS George Washington with embarked air wing, Cruiser USS Monterey, Destroyer USS Stout, and Frigate USS Underwood". This means that the US Navy will be sending 4 ships, one of them carrying 60 fighter planes, and a total of 6,500 soldiers on a major military exercise in the Caribbean starting in the next few weeks. (see: U.S. Navy Carrier Strike Group to make Caribbean deployment) 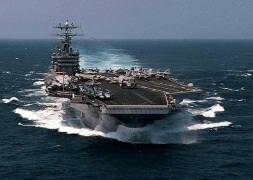 The stated aims of this exercise are: "enhancing military-to-military relationships with regional partner nations, improving operational readiness, and fostering good will." By "fostering good will" what is meant is sending a strong message to Venezuela and Cuba. The commander of the US Southcom General Bantz Craddock has on many occasions attacked the Venezuelan government. The decision to send this unusually large force to the Caribbean was announced just two weeks after General Craddok spoke at a US Senate committee hearing in which he called the Venezuelan government a "destabilizing force" because of its moves in the international arena, as well as ongoing efforts to purchase weapons, particularly from China. "The purchase of military equipment has not been a transparent process. This is a destabilizing factor in a region where nations are making joint efforts to face international threats, rather than fighting each other," he stated. And he added: "We are not fully convinced that such ample and large purchases have an origin in Venezuelan national defense concerns."

In a press conference during his visit to Uruguay in June 2005 he was even more specific:  "I do not see Cuba as a military threat to the United States, I do not see Venezuela as a military threat to the United States, what I do see is an influence in Latin America that creates, potentially creates instability and uncertainty, because in Cuba, obviously it is a totalitarian state, a communist state, and in Venezuela it appears that democratic processes and institutions are at risk. That has great opportunity to create, again, instability and uncertainty throughout the region if those processes are exported. So we are concerned, and we believe the neighbors in the region should also be concerned." In a thinly disguised threat of military intervention, General Craddock added: "The military aspect is to create conditions to allow other solutions to work, economic, political, social". (http://montevideo.usembassy.gov/usaweb/paginas/431-00EN.shtml).

In the recently released Strategy for National Security, 2006 document Washington clearly sees Venezuela as a target: “In Venezuela, a demagogue inundated with petrol money is undermining democracy and trying to destabilize the region.” (http://www.whitehouse.gov/nsc/nss.html)

It is clear that the current military exercises must be seen in this context. This is recognised even by right military defence analysts from the US. An article in the Virginian Pilot newspaper quoted one of them: "The presence of a U.S. carrier task force in the Caribbean will definitely be interpreted as some sort of signal by the governments of Cuba and Venezuela,” said Loren Thompson of the Lexington Institute, a pro-defense think tank in Washington, who added: "the fact we are doing it now will be interpreted by Castro and Chavez as indicative of some sort of U.S. plan, or initiative, or whatever you want to call it". (GW strike group will head south for training, Jack Dorsey, Virginian Pilot, March 28th)

The Spirit of Freedom?
The US Southcom already has a number of military bases within reach of Venezuelan territory. These include smaller "Cooperative Security Locations" based in Aruba and Curaçao off the coast of Venezuela, in Manta in Ecuador and in El Salvador, together with larger bases in Soto Cano in Honduras, Guantánamo in Cuba and in several locations in Colombia. Southcom has just issued a new "theater command strategy", part of which has been declassified.  Objective number one is to guarantee that "regional energy supplies will flow freely into international markets and will not be targets of aggression." Essential to meeting this security objective, says Southcom, is improving the ability of "partner nation security forces to protect critical infrastructure" of the energy industry in the region. This clearly affects Venezuela, which is the 3rd largest supplier of oil to the United States.

A number of objectives have not been declassified, but then number six is to "prevent rogue states from supporting terrorist organizations". Considering there are no "rogue" states in Latin America, this can only be a reference to Venezuela, which Washington has accused, without presenting any proof, of supporting the Farc guerrillas in Colombia (described by Gen Braddock as "narco-terrorists").

Usually the corporate media dismisses president Chavez's warnings of the danger of a US military intervention against the Bolivarian revolution in Venezuela. But information publicly available shows that this is a very real danger. Washington is not likely to start an open war in Venezuela at this particular time, when they are bogged down in a war they cannot win in Iraq, but they are certainly making preparations. One way in which military intervention can take place is by artificially fostering autonomist demands in Zulia, the oil rich Venezuelan state on the border with Colombia. Local politicians in this region (one of only two with an opposition governor) have been busy demanding a referendum on autonomy. A scenario could be envisaged in which they declare independence unilaterally and ask for foreign intervention to guarantee their "democratic rights". Such an intervention would be easier to justify and could even take place under the guise of "peace-keeping" (as is currently the case with the imperialist intervention in Haiti).

This would obviously not be an easy task. Chavez has already pointed out, correctly, that the day after military intervention by the US against Venezuela, the whole continent would be in flames. Latin America is witnessing a shift to the left with mass movements, general strikes, insurrections, elections of governments which are seen as being left wing by the masses, etc.

The United States is seriously worried about the impact the Venezuelan revolution is having in the rest of Latin America. They are accusing Chavez of interfering in the election campaigns in Peru and Mexico, as they accused him of interfering in the elections in December in Bolivia in which Evo Morales won a landslide victory. The accusation that the Venezuelan government is directly financing candidates in other countries is obviously wrong. But what is certainly true is that the Bolivarian revolution has raised the hopes of the masses of workers and peasants throughout the continent and beyond. It has provided an example that it is possible to challenge the policies imposed by Washington. In previous decades a familiar pattern would take place in Latin America. The masses of workers and peasants went on the move and elected a progressive government which would soon be overthrown by a military coup engineered from the US. This had a demoralising effect on the mass movement in the continent. The Bolivarian revolution has also changed that with the defeat of the military coup against Chavez in April 2002 by the mass movement of the people in the streets.

And the effect is not only in Latin America but also in the United States where millions of Latinos live and work, many of them keeping links with their countries of origin. The enormous hundreds of thousands of Latin American immigrants in the United States who have been demonstrating and going on strike for their rights in the last few weeks, would not remain idle if the US staged a military provocation against Venezuela.

All this makes the Bolivarian revolution even more dangerous to the ruling class in the United Sates. They are carrying out careful preparations to put an end to it. These include a campaign of relentless pressure, through the media, through diplomacy and economic sabotage, trying to prevent the purchase of weapons by Venezuela, etc. And the current military exercises in the Caribbean are clearly part of these preparations, both as a threat and as a concrete preparation for future military intervention.

For these reasons it is more important than ever to redouble the efforts of the solidarity movement. Hands Off Venezuela!!