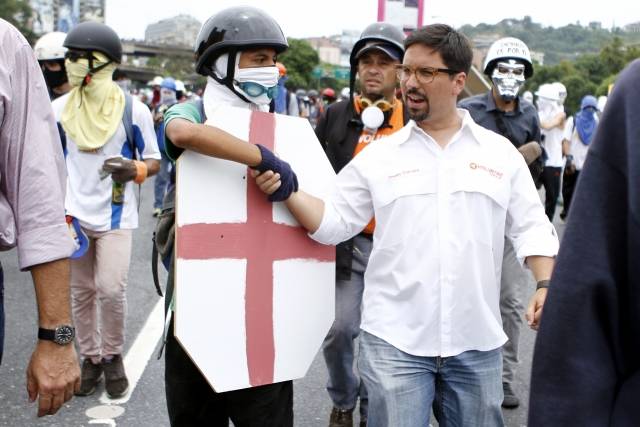 The Venezuelan opposition is stepping up its campaign with a “sovereign consultation” on Sunday July 16. The three questions asked in this consultation are about the legitimacy of the Constituent Assembly the government has called for, the need for the armed forces to intervene and remove the government and the formation of a so-called “government of national unity”. The opposition has announced that the consultation on July 16 will be the “zero hour” for a national, permanent and open ended “trancazo” (road blockades), until the “fall of the dictatorship”.

The aim is clear: to overthrow the government of Nicolas Maduro. The opposition had already refused to participate in the Constituent Assembly elections of July 30, but now, the first question of their consultation asks whether people “reject and do not recognise” that Assembly. Furthermore, question two “demands from the armed forces and all civil servants … to back the decisions of the National Assembly”. This is a clear call for the armed forces to mutiny against the president.

Finally the third question calls for the “renewal of all public powers” (even though their terms of office have not been exhausted), “free and transparent elections” (though it does not specify for which offices: councils, regional, presidential, national assembly?) and finally “the formation of a government of national unity in order to re-establish the constitutional order” (though it is not stated who would compose such a government, or for what period of time would it be in office).

It is ironic, or more precisely cynical, that the opposition now uses the banner of the Bolivarian constitution which they rejected at the time, have opposed ever since and which they abolished during their coup in April 2002.

In effect, the opposition is calling for the removal of all state powers, except those they control, and for them to come to power by force. This is their attempt to resolve the conflict between the different state institutions in their favour and is strongly reminiscent of the April 2002 coup they carried out. Then, as is being called for now, the Armed Forces intervened to remove the president, and the opposition created a so-called “government of national unity” presided by bosses’ federation chief Pedro Carmona. One of the main aims of the opposition with this consultation is to give some sort of legitimacy to a new “government” of theirs which then they will try to get international recognition for.

To add more weight to their insurrectionary move, a series of right wing former presidents of different Latin American countries are travelling to Venezuela to participate in the coup and lend it some semblance of legitimacy. Amongst them are Andrés Pastrana, from Colombia; Laura Chinchilla, from Costa Rica; and Tuto Quiroga, from Bolivia. Of course, all their talk about “democracy” and “human rights” is a scandalous farce. Pastrana presided over the implementation of Plan Colombia during which widespread killings and violations of human rights were carried out by Colombian and US troops under the guise of the “war on drugs”. Chinchilla is an opponent of basic human rights like same sex marriage, abortion and the morning after pill, as well as being mired in corruption scandals during her presidency of Costa Rica. Quiroga is a Bolivian right wing politician who was vice president during the brutal repression of the struggle for water rights in Cochabamba as well as the implementation of a US backed policy of eradication of coca plantations which was carried out by suppressing the local peasant population. Finally, Vicente Fox is also a right wing politician whose career is mired in corruption scandals and repression (in particular of the citizens of Atenco who were opposing their forced relocation to make way for the building of an airport). Any talk of human rights and democracy on the part of these corrupt and repressive politicians is an offensive joke.

Of course, the world’s media is providing a cover for this attempted coup which also has the support of Washington, Madrid and Bogota.

The Venezuelan opposition has always been quick to cry fraud, but only in those cases where they have been declared losers of course, but the way they are organising their consultation lacks even the most basic of guarantees. Opposition leader Negal Morales has claimed that “more than 14 million people will participate”, something which is clearly physically impossible. First of all, in the last presidential election in 2013, total turnout was 15 million, with 7.2 million voting for the opposition candidate. If over 14 million people were to turn out this time in a consultation convened by the opposition alone, that would mean that ALL Bolivarian supporters have now switched sides, something which is clearly absurd. If you were to take the December 2015 national assembly elections as a basis, 14.3 million voted then, with 7.7 million voting for the opposition. In any case, the opposition claims there will be 1900 voting stations throughout the country, which they say will be opened from 7am until 4pm, that is 9 hours. It would require over 800 people voting every hour, 13 every minute or 1 every 4 seconds in each polling station for 14 million people to vote!! Accuracy, consistency and facts have never been the Venezuelan opposition’s strong points.

Negal Morales himself admitted that there was no way of checking that people were not voting twice or more. He said people would not have allocated voting stations and that “could generate double voting” and appealed “to people’s civic consciousness not to do it”! To add to the farcical nature of the process, he added that “voting records would be burnt immediately after the count”. Well, there you have it. The type of democracy the Venezuelan opposition is interested in is one where what counts are the declared results, not what people vote for nor how many do actually vote.

You can be sure that on the same night the Venezuelan opposition will declare a massive victory in which millions will be declared as having voted to reject Maduro’s “dictatorship”. Their whole campaign is based in their age-old anti-Communist hysteria. According to their thinking, if the Constituent Assembly goes ahead it will impose a “Cuban constitution” and since Castro-Communists eat children for breakfast, that must surely be a very bad thing. The Constituent Assembly will serve, allegedly, to abolish private property (and by this they mean not only the means of production, but above all YOUR personal property). Finally, the Constituent Assembly will consolidate Maduro’s dictatorship. One loses count of how many times this Castro-Communist dictatorship has been consolidated!!

On the basis of this “massive success”, the opposition has promised to “step up the struggle” in what they described as “a national zero hour, the uprising of the whole country”. Vice-president of the National Assembly and opposition leader Freddy Guevara has promised that from July 17 there will be “mass civil disobedience, with even stronger measures”, including “road blockades, a. national strike, the takeover of Caracas and indefinite occupation of roads”, and he added that if all that doesn’t make “those mad men realise”, then “the Army will have to withdraw their support”.

Opposition actions to try to overthrow the government have already gone on for over 100 days and have involved violent rioting, gun fire against police officers, innocent bystanders and chavista supporters, the lynching and burning alive of chavista supporters, suspected or real, the use of homemade explosives and rocket launchers, remote controlled roadside explosive devices, the commandeering of a helicopter to attack public buildings, arson attacks against schools, buses, hospitals and social housing projects, etc. One can only wonder what Guevara and the opposition leaders mean when they talk of “stepping up the pressure” and of using “even harsher actions”!

The situation in Venezuela is therefore both extremely serious and urgent. The next few hours could be crucial.

The reactionary opposition represents the interests of the oligarchy (bankers, capitalists and landowners) and imperialism which stands behind them. If they were to take power they would launch a massive austerity package on the Venezuelan workers and the poor, with brutal cuts in public spending, the abolition of the Bolivarian social programs, the privatisation of social housing, the privatisation of expropriated companies, the privatisation of re-nationalised utilities, the abolition of the main rights and protections in the Labour Law, etc. At the same time, they would launch a political purge of all state institutions, ministries and state-owned companies and  an all out assault on democratic rights, unleashing a lynch mob against chavistas and their organisations.

For this reason we must oppose their reactionary campaign and stand in solidarity with the Venezuelan working people.

As we have explained elsewhere, this does not mean giving support to the present policies of the Maduro government, which are ineffective in combatting reaction and by making constant concessions to the capitalist class undermine the social base of support of the Bolivarian movement. Even now, during the campaign for the Constituent Assembly elections, the so-called “patriotic businessmen” are advocating the privatisation of expropriated companies as well as the use of the Assembly to “strengthen private property rights”. This is the main plank of the campaign of Oscar Schemel, for instance, with the full backing of businessman and minister Perez Abad, which has been given ample time in all the state media. That road leads directly to disaster.

The only way to defend the conquests of the revolution is by unleashing the revolutionary self-activity and organisation of the masses of workers, peasants and the poor. An example of what is possible can be seen in the campaigns organised by groups like the Bolivar Zamora Revolutionary Current (which has organised Popular Defence Brigades) or the Alexis Vive Patriotic Force (which is calling for a new revolutionary leadership).

The offensive of the oligarchy must be defeated, but it can only be defeated by revolutionary means.

The duty of revolutionaries and consistent democrats internationally is to oppose the insurrectionary attempts of the reactionary opposition and defend the gains of the Bolivarian revolution. Taking a “neutral” position puts you objectively on the side of counter-revolution. We must wage a relentless campaign against the lies of the international media, to denounce our own imperialist governments which support reaction in Venezuela in the name of “democracy” and “human rights”. At the same time we must support and encourage those in Venezuela who are beginning to draw the correct revolutionary conclusions from this crisis: we cannot make half a revolution.