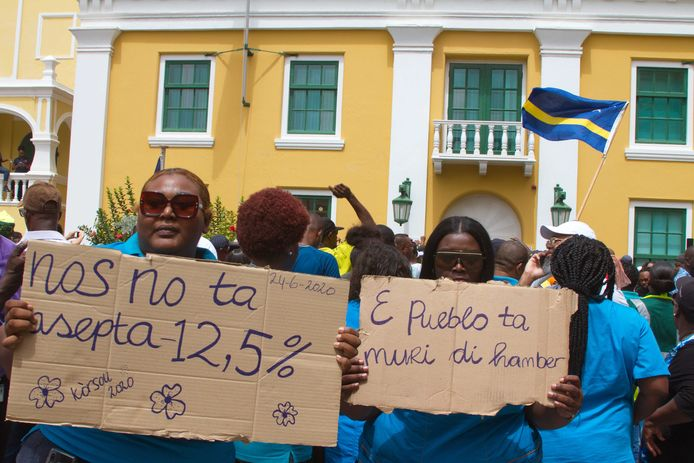 For the past few days, the Caribbean island of Curaçao has been shaking. There have been reports of riots, looting and fights with the police. The Dutch state is now helping the island government to “maintain order” by deploying the Dutch marine corps. What is happening?

First, some background information. Curaçao is an island off the coast of Venezuela that was colonised by the Dutch in the 17th century. For a long period, it has been exploited by the Dutch imperialists, at first through plantation culture and salt mining, and since the early 20th century also for oil. Slave labor was the norm until 1863, when slavery was abolished in favour of share-cropping (paga-tera) and wage labor.

Starting around 1970, Royal Dutch Shell started reducing its activities in Curaçao, which led to rising unemployment, poverty and emigration. In 1985, Shell completely left Curaçao. The Isla-refinery was sold to the Venezuelan state oil company PDVSA. Refined oil continues to play an economic role, but less so than in the past. The economy of Curaçao re-oriented itself mainly towards tourism (from the Netherlands, USA and Venezuela). Additionally, Curaçao is, and has been for some time, an important centre for so-called ‘financial services’, i.e. legal forms of tax evasion for Dutch and other capital, for operations in the Western hemisphere.

In 2010 Curaçao, which was formerly a part of the so-called Netherlands Antilles, officially became a separate country within the ‘Kingdom of the Netherlands’. This means it supposedly stands on an equal footing with the continental Netherlands. Curaçao as a country has its own state, government and treasury, but it has the Dutch king as head of state. Defence and foreign policy are the domain of the Dutch king and his ministers. The Dutch government also oversees Curaçao’s finances.

These past years, the situation in Curaçao has been influenced by the severe crisis in Venezuela. The economic crisis and the sanctions against Venezuela have had negative economic effects on the economy of Curaçao, because of the great importance of trade with its neighbour. Additionally, a wave of poor Venezuelan migrants has moved to Curaçao. They have largely ended up in the black economy and in prostitution. The Dutch ruling class, however, attaches greater value to its solid relations with the USA than to Curaçao’s local trade and follows the American policy of sanctions and of recognising Juan Guaidó as self-declared ‘president’ of Venezuela.

Due to the COVID-pandemic, the tourism sector collapsed in 2020, resulting in much uncertainty and poverty arising in a short time. Over half of the population is now dependent on food aid. Unemployment is approaching 60 percent. The state’s income has plummeted and the budget deficit now amounts to 90 percent of GDP. The people of Curaçao now demand that their kingdom provides for them, but the response of the Dutch state has been ice cold.

Angry protests erupted on the island of #Curaçao on Wednesday, following an anti-austerity rally in front of the complex where the seat of government is located.
Protesters also demanded the resignation of @EugeneRhugg. pic.twitter.com/Mx1m1JuSgM

Curaçao can only receive aid in the form of loans – and only on condition of austerity and “reforms”. This is the same gangster-like behavior with which the IMF has ruined many ex-colonial countries. The idea is that the public sector is starved of funds and national possessions are privatised, in order to cough up money with which to repay the loans (with interest). This money eventually ends up in the hands of finance capital, which thus profits from the misery of ordinary people. Dutch Prime Minister Mark Rutte placed the attitude towards Curaçao in sinister context by comparing the island to Italy and Spain, against which the Northern countries of the EU are waging a bitter struggle for austerity and subjugation, a struggle in which the Dutch government plays a leading role.

State Secretary for Kingdom Relations Raymond Knops has put his knife at the throat of the Caribbean countries of the Kingdom of the Netherlands. He demands that all (semi-)public sector workers of Curaçao take a 12.5 percent cut to their total labour compensation package. That amounts to pouring petrol on the flames and puts the screws on the entire working class. It is this measure that provided the trigger for the current uprising. The first group that took to the streets were the refuse collectors. This is clearly a class-based movement against the politics of austerity.

The Dutch ruling class and its state are directly responsible for the present situation, with their politics of extortion that hits Curaçaoan workers like the garbage collectors the most. Their sending in Dutch troops shows how the colonial relations live on. It reminds one of the legendary Trinta di mei, the large strike of oil workers on 30 May 1969, which gave rise to a popular insurrection that deposed the government. Then, too, the Dutch state intervened with its Marine Corps, in order to secure the interests of Dutch capital.

A section of the ruling class now opposes the hardline strategy, like Hans de Boer, president of the employers’ organisation VNO-NCW. He states: “There are very fine people [in the government of Curaçao] right now. They are going to be kicked out. Then, a populist will be elected and the situation will be worse.” From his perspective, he is completely right. Prime Minister of Curaçao Eugene Rhuggenaath has behaved like a ‘fine gentleman’ by following the dictates from the Netherlands, but the Rutte government kept on increasing its demands. Now there are rumors that he has fled to the neighbouring island of Bonaire. There is a big probability that the next election will install ‘populist’ politicians who will not be so obedient towards the Netherlands.

Riots have broken out in the Caribbean island of Curaçao. After trash collectors went on strike and took to the streets against Dutch-imposed budget cuts, protesters clashed with the police and stormed a government building as they demand the prime minister resign. pic.twitter.com/vXh8p1Yqki

The Dutch labour movement needs to demand of the government that the marines be withdrawn and that Curaçao receives the aid it requires to fulfill human needs and rebuild the economy, without destroying the public sector. Of course, the argument will be raised that no money exists to do this. But that cowardly line of reasoning assumes the current framework of an economy that is dominated by private monopolies and a state that serves big capital. Curaçao is basically a tax paradise, so a first step towards getting the money would be to issue an emergency tax on these companies, to let them pay for the well-being of the local population. Refusal to do this could be countered with capital controls and expropriations.

The desperation and poverty of the people of Curaçao ultimately has the same cause as the desperation and poverty of many in the Netherlands and in all other countries of the world: the capitalist system. We need to state clearly that the productive forces of the world have been developed more than sufficiently to provide everyone on earth with a decent living standard. The obstacles to this are the private ownership of wealth and the division of the world into nation states.

Curaçao is far too small and economically dependent ever to exist as a truly independent nation. The relationship with the Netherlands is solely the product of a scandalous history of colonisation and exploitation. In the medium term, the best way forward for Curaçao is probably to become part of a socialist federation of Latin America and the Caribbean, a choice that is completely up to the local inhabitants of the island. That perspective, however, belongs to the future. Therefore, the message right now from the Dutch labour movement to the government must be: