Israel & Palestine
Share
Tweet
On April 18, thousands of Israeli students came out to express their opposition to the Shocat Committee, set up by the state to push through its agenda of raising University tuition. The students have now called for an indefinite strike against the plans of the government. 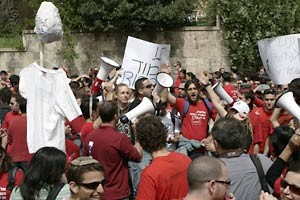 On April 18, thousands of Israeli students came out to express their opposition to the Shochat Committee, a body set up by the state in order to push through its agenda of raising university tuition. Initially 2000 protesters came, but the demonstration eventually grew to around 5000 people.

This very militant and, in the conditions of Israeli political activity, quite large demonstration, expresses a mood that has been a long time in the making. We have been constantly writing and explaining that the great majority of Israeli society is opposed to the economic policies of the Olmert government, which, between the Prime Minister's 2% approval rating and the 1% approval rating of Amir Peretz, the Minister of War and the chairman of the junior partner of the coalition government, really has no base of support in society. While the struggle of the workers may have ebbed in the most recent period, the students and teachers are escalating theirs.

The student movement in Israel has in general been historically more conservative than even that of the trade unions. The actions of the students, which began almost two weeks ago with a strike which now encompasses the lecturers' union as well, show the extent of opposition to Olmert's policies.

Background to the demonstration and strike 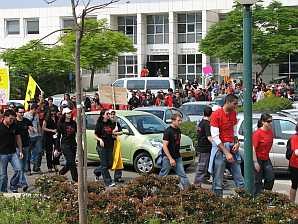 In October of 2006, following protest against the Olmert government's intention to cut the Education Ministry's budget by 1.2 billion shekels (approx. 215 million Euro), the Ministries of Education and Finance set up the Shochat Committee, headed by former right-wing Labour MK Abraham Shochat. Its stated aim was to find ways to prevent this cut. In reality, given Shochat's political allegiances, there was never any doubt that he would recommend raising tuition. University students and faculty members were not represented in any way on the committee, only on the subcommittees.

In Israel there is an old maxim that whenever the government wishes to "bury" an issue, it sets up a committee. This time around the situation was probably even worse - the government set up the committee to further its own agenda of making the students and the masses in general pay for its economic troubles. It followed the Winograd Committee, which actually proposed the lowering of tuition, though by such a low sum that it would have hardly changed anything. Still, it is clear that the government was looking for a way to justify its policy from a "professional" and "economic" point of view.

Student opposition and protest against the Committee began at its very inception, but the students have had enough. Almost two weeks ago, they called an indefinite strike, demanding the dissolution of the committee and the lowering of tuition. Naturally, these demands have fallen on deaf ears. That is why the strike in front of Olmert's home was called.

The demonstration in Jerusalem 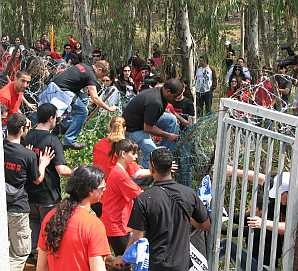 At first the demonstration was very quiet, and it seemed like only a few hundreds were present. However, about an hour and a half afterwards, the entire part of the street in the area of the Prime Minister's home was flooded with protesters, carrying signs with slogans such as "With deep sorrow we announce the death of Education", "The Slaughter Committee" and "We Are Being Slaughtered" (the last two are a play on Shochat's name, which comes from the same root as "to slaughter"). The demonstrators were demanding free higher education to all, and many (if not the majority) raised slogans demanding free higher education and the linking up of their struggle with those of the lecturers, teachers, and workers. This is an excellent example of the radicalization of a layer of activists that is mostly petty-bourgeois in its social makeup. Even the capitalist media quoted the students as putting forward the slogan: "Olmert is corrupt, we shall not rest until he falls".

After several speeches by student activists and by Dov Chanin, a Hadash (Communist Party front) MK, the demonstration turned into a march. However, the march, which was heading (it seems) downtown, was blocked by police forces, and instead the demonstrators continued the protest at Independence Park. At this point there were at least 5000 protesters there. A while afterwards the protesters dispersed, but there was a marked feeling of very inspiring militancy at the march.

The specter of police repression 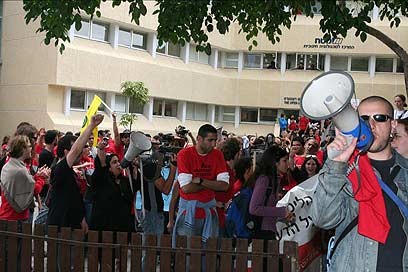 Although the demonstration was not violent by any means, nor did it have any intention of being so, and despite the fact that the student movement has not yet started to outgrow its reformist phase, very large police forces were present at the demonstration, showing the extent to which the state fears any progressive movement. Far from securing the demonstration, the massive police presence seemed to be an attempt at provoking greater repression of the movement.

Reports of police stopping students' buses on their way to the demonstration and examining protesters' belongings and vehicle trunks were all over the capitalist media, and many police officers stopped every protester on his way to the demonstration in order to look for anything they considered dangerous. After the march began, many policemen, including riot police and policemen on horseback blocked the march from going further down its path. A police helicopter was patrolling the skies, and a heavy vehicle with a water cannon on top of it could be seen further up the road from where the protesters were stopped. Later on, in the park, policemen were still in the area in great numbers. The police were obviously looking for a provocation when it stopped the march, but luckily the students did not give in to this foul attempt to break them.

This is a warning to all student activists: capitalism in Israel cannot stand even the most elementary democratic demands of the students' movement. At one point or another, if the struggle does not spread, police repression will set in. In many cases the police, in other countries but in Israel as well, had its own agents impersonating as protesters and provoked the policemen into repressing the movement. In the end, there will come a point when simply being careful or peaceful just won't do.

Granted, the strike and demonstration are steps in the right direction. That the lecturers and teachers have joined the students in their strike is excellent as well. But in order to win anything, the ruling class must be hurt in the only place it cares about: its profits. This none of the above mentioned groups can do, no matter what numbers or what level of militancy is displayed. The orientation must be towards the working class.

The workers, especially those organized in the Histadrut, wish to bring down the Olmert government. They are looking for an alternative. The workers of the local councils have not been paid for months, some for years. They too have children who will one day want to study at the universities - some are parents to students. They have every reason to support the struggle of the students. On the other hand there are the students themselves, many of whom work part-time or full-time jobs in order to pay their already ridiculously high tuition. They certainly have an interest as well in the struggle of the workers, including the teachers. They also have an interest in putting an end to the bloody occupation of Palestine, which puts millions of innocent people in virtual ghettos, provokes terrorism, and gives the government an excuse to cut all other budgets for the sake of "security" and for funding the criminal enterprise of the settlements. This interest of the students, teachers, and workers to struggle transcends all ethnic, national, or religious interests: it is the interest of the masses - just as the interests of the state are the interests of the ruling class.

A 24-hour general strike of the entire workforce, with the support of the teachers and students, with councils of action established at every university and workplace in order to prevent the strike from being manipulated like the last general strike, will ensure victory over the Olmert government - a victory which will galvanize all of society to the cause of the working class and socialism.

No to the right-wing government of Olmert!

No to the Shochat Committee!

For free education for all, from kindergarten to university!

Labor Party out of the Government! Fight for a government of workers' and left parties on a socialist program!