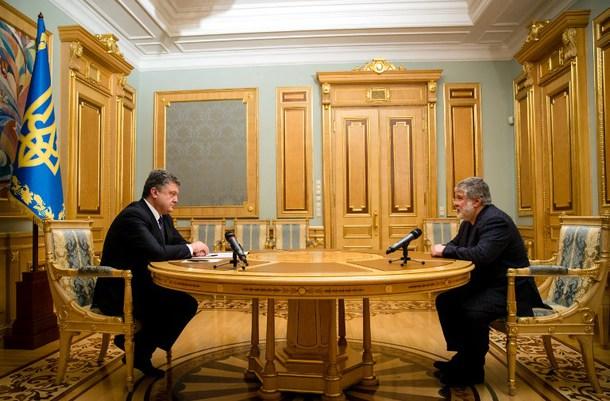 The so-called “Maidan revolution” was supposed to stand for democracy and Western values while fighting against corruption and the oligarchy. The actual result was that the reign of one group of oligarchs was replaced by another, and now, those who benefited from the change are fighting each other for the loot.

The struggle for power was dramatically revealed this week when Igor Kolomoisky, governor of Dnepropetrovs and billionaire oligarch, sent detachments of armed men from his private militia to take over the headquarters of two state-owned companies that he had an interest in. The clash ended with president Poroshenko, a member of the oligarchy himself, forcing the removal of Kolomoisky as governor on Wednesday, March 25.

This was followed on the same day by the televised arrest of two high ranking state officials on corruption charges while they were attending a cabinet meeting. These events have been described by some in the Western media as a demonstration of Poroshenko’s willingness to stand up to the oligarchy and stamp out corruption. Nothing could be further from the truth.

Igor Kolomoisky is one of the main representatives of the Ukrainian oligarchs who enriched themselves through the looting of state property after the collapse of the Soviet Union. Kolomoisky perfected the technique of using armed thugs to take over companies he was interested in. Forbes describes one such expropriation as, “a literal raid on the Kremenchuk steel plant in 2006, in which hundreds of hired rowdies armed with baseball bats, iron bars, gas and rubber bullet pistols and chainsaws forcibly took over the plant.”

According to Forbes Kolomoisky is worth $1.3 billion, though this is most likely to be a gross underestimation. His businesses include energy, aviation, media and banking. Through his control of Privat group, his interests extend into banking, industry, mining, etc.  He was one of the main beneficiaries from the restructuring of oligarchic power which took place as a result of the overthrow of Yanukovitch a year ago. He was appointed as governor of the industrial eastern region of Dnepropetrovsk by the post-Euromaidan authorities following their victory.

Some Western media outlets praise him for having prevented the spread of the anti-Maidan movement in Dnepropetrovsk. What they are not so keen to report is that he used the same methods in dealings with business rivals in order to crush any political opposition. He armed, financed and organised far right thugs from the Right Sector, football ultras (from his own FC Dnipro and other teams) and others into armed militias that would terroize anyone who opposed his rule. His influence extends into the Azov, Donbass, Dnipro-1 and other battalions of far right thugs which have now have been formally incorporated into the National Guard, but over which he still has a degree of control.

Immediately after the Odessa massacre on May 2nd, when dozens of anti-Maidan protesters were killed by a fascist lynch mob which set a trade union building on fire, his close ally and business colleague oligarch Ihor Palytsia was appointed as governor in the Odessa region.

The immediate reason for the present conflict was the attempt by the government to regain control over two gas companies in which the state has a majority stake but which have been under the de facto control of Kolomoisky. The gas companies involved are the country’s largest gas producer UkrNafta (where Kolomoisky holds a 42% stake) and its pipeline subsidiary UkrTransNafta. Kolomoisky’ control of these two companies (which had not paid any dividends to state owned Natfogaz for years!) allows him to be a major player in oil and gas. His Burisma Holdings company, which last year hired the son of US Vice President Joe Biden to its board, is now the largest private gas company in Ukraine.

As a response, Kolomoisky sent hundreds of armed men to the headquarters of both companies. The tense stand off lasted for a few days with Kolomoisky threatening to bring 2,000 armed men to the capital to impose his will. He even played with the idea of promoting “federalisation” movements in both Odessa and Dnepropetrovsk. He also started to move some of his pawns in Parliament, including the President’s own “Block Poroshenko. These pawns were also conveniently positioned within several different parliamentary groups.

The Kiev government responded by putting Ukraine’s Security Service, Nalyvaichenko, on the offensive. Nalyvaichenko accused Kolomoisky’s two deputies in Dnepropetrovsk, Korban and Oliynyk, of being involved in criminal activities including smuggling and the murder of state officials. These allegations are most likely true, but one has to wonder about the timing of the allegations. Gennady Korban replied in kind by saying, “Thieves are sitting in Kiev today, and it's time for these thieves to go." Of course, his allegations are true as well! “Thieves fighting thieves for the loot” adequately describes Ukraine’s capitalist class today.

With the removal of Kolomoisky as governor, the clash has now been resolved in Poroshenko’s favour. Of course, none of this has anything to do with the president’s interest in “transparency” nor “the rule of law”. The new appointed CEO of UkrTransNafta is a former employee of member of parliament Igor Yeremeyev, an oligarch with interests in the oil and gas sector who is a rival of Kolomoisky and has recently joined the ruling government coalition.

The new appointed governor of Dnepropetrovsk Valentin Reznichenko is a former business partner of the oligarchic media magnate Boris Lozhkin who now serves as head of the Presidential Administration under Poroshenko. Of course Lozhkin, Reznichenko and Poroshenko were also business partners in the past.

If the whole affair looks like a very complex web of business, criminal associations, and rivalries spilling over into politics through the control of parliamentary seats and groups … is because it is precisely that.

Of course, a factor in the whole struggle between different oligarchic clans is the need for the government to appear to be clamping down on corruption and illegal business associations in front of his Western “partners” (read masters). The appointment of a US national, Jaresko, as minister of finance was also supposed to reassure Western capitalists that the government was forcing the country’s businessmen to “clean up their act”.

The high profile and live broadcast arrest of the head of the National Emergency Services and his deputy, handcuffed during a cabinet meeting they were attending, is a simply window dressing to reassure the IMF and the EU who hold the purse strings to the battered Ukrainian economy.

Corruption is rife at all levels of the government, including and particularly in the lucrative business of the so-called “anti terrorist operation” against the Donbass.

The combination of the continuation of the power of the oligarchs (despite all promises and illusions raised by the Maidan “revolution”), hyper inflation, factory closures, the never ending war in the East, the frightening collapse of the economy, and the brutal IMF imposed austerity measures is testing the patience of the Ukrainian population to the limit. In the last few days miners have been demonstrating as they demand payment of back wages. There have been a number of explosions of anger at different factories and workplaces.

Attempting to frighten the country’s creditors into making concessions, finance minister Natalie Jaresko made the following threat, "If, God forbid, there is another revolution, it won't be of the same kind." She might not be far off the truth.