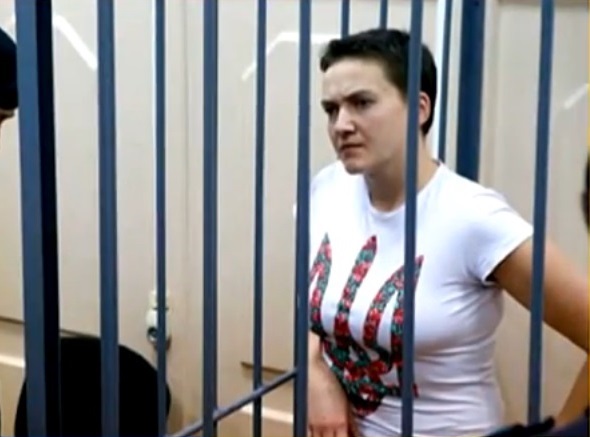 For a long time Nadiya Savchenko was touted as a symbol of the “Ukrainian defiance in their struggle against Russia”. Returning to Ukraine last year, she has been an unpleasant surprise for the Kiev regime as she criticizes them and their role in the civil war.

The conflict in Donbas has produced a number of ‘heroes’ and ‘villains’ on both sides since it started in 2014. The oligarch owned pro-government media in Ukraine – now the only kind really allowed to exist in the public sphere after many repressive measures – has made a significant effort to promote the heroes of the front lines, fighting for the Ukrainian army in the so-called Anti-Terror Operation (ATO) against the Donbas rebels.

A number of these heroes have actually not spent so much time in the front lines themselves, as much as securing lucrative political positions in the Kiev parliament. The Ukrainian oligarchy controlling the parliament recruit these ‘war-heroes’ to come sit next to them on their parliamentary benches. This benefits the war hero with privileges and government salaries they would not have dreamed of having access to. The oligarchs can retain patriotic image – themselves and their children spending their summers on the French Riviera – while the children of ordinary Ukrainian receive draft enlistment cards to go fight for their interests.

A situation like this – as the reader can surely understand – requires considerable PR help.

The Case of Nadiya Savchenko

After deserting the Ukrainian Army to participate in Euromaidan, Nadiya Savchenko was one of the early volunteers for the battalions sent by the new Kiev government to crush the anti-Maidan rebellion in the Donbas during the spring of 2014. Her Aidar battalion, formed primarily from the Euromaidan battalions, was one of the most notorious during the conflict, containing openly fascist elements from the ranks of Ukrainian football ultras. The battalion has since been widely accused of war crimes, including torture, abductions, unlawful detention, ill-treatment, theft, extortion, and executions of prisoners, including by Amnesty International, who also reported that they were blocking humanitarian aid to the rebel Donbas republics.

On June 17th 2014, she was captured by rebel soldiers on the territory of Lughansk. It is not the object of this article to speculate on how she made it to the Russian authorities, or whether she was indeed responsible for the deaths of Russian journalists Igor Kornelyuk and Anton Voloshin. There are many other writings speculating on only these subjects and they detract from her role today.

On July 9th, it was revealed by the Russian authorities that Savchenko was being detained on suspicion of crossing the Russian border illegally and murdering the Russian journalists. During the next 2 years of the highly publicized trial and detention, she was made a hero-martyr by the Ukrainian media. Campaigns for her release were organized by pro-Kiev NGOs, and gained significant coverage by the Western media. Only months after her arrest, she was placed first on the list of oligarch Yulia Tymoshenko’s Fatherland Party, and elected in-absentia to the Ukrainian parliament in the parliamentary elections of October 2014.

In May of 2016, she was released by Russia in a prisoner exchange for two Russian nationals held prisoner by the Ukrainian government, accused of being Russian intelligence agents in similarly murky circumstances as those of Savchenko. Almost immediately, she took up her post in the Ukrainian parliament.

While initially celebrated as a victory by the Poroshenko government, Savchenko did not play the same game her “war hero” parliamentary colleagues did. Very quickly, she began criticizing the corruption in the Kiev government and calling for recognition and negotiations with the rebel side to end the conflict as quickly as possible. She went as far as having a meeting with the rebel leaders in Minsk, quickly being expelled by her Fatherland Party for “negotiating with the terrorists”. She has persisted in attempting to start this dialogue, recently visiting the rebel capital of Donetsk.

From being used by the Ukrainian media as a symbol of “iron willed resistance to Russia”, Savchenko became the opposite. From an embarrassment to Russia, she became an embarrassment and inconvenience to the Kiev regime. The politicians and political commentators who built up Savchenko as a national hero, are now calling her a traitor, Russian agent and even calling for her immediate arrest for treason.

Marxists understand that political consciousness is shaped by conditions and events, but looking at history, we understand that the process is not linear. The does not only apply to individual dissidents like Savchenko, but the working class as a whole.

Leaving everything aside, Savchenko herself is a remarkable individual. She was one of the first Ukrainian women train as a military airplane pilot. In 2005, she was deployed to Iraq as the only female soldier in the 1650 person Ukrainian contingent to support the US military occupation there. She wrote about this extensively in her recently published memoirs.

As noted by journalist of the Ukrainian left website Liva, Andriy Manchuk – who himself faced the wrath of the Ukrainian state and is now forced to live in exile – Savchenko drew many comparisons between the war in Iraq and her experience fighting in the rebel territory of Donbas. She writes of how the war’s supposedly noble and valiant aims turned into a reality of dehumanizing the population who they were supposedly saving. There are parallels to be made between Savchenko and US Iraq war veterans joining movements like Occupy and the Standing Rock protests.

In a good summation of the present conflict, she wrote that “once a war goes on without end, it becomes clear that it is beneficial for everyone”. Of course this does not refer to the people suffering in the war zones, but the many politicians and businessmen making very good money and careers on the war contracts that stream from all these wars. One only has to look at the yearly financially statements of President Poroshenko to understand just how lucrative this can be. We can see here how Savchenko’s particular conditions have formed her views on the conflict, but also how these realizations can take time to form.

While the post-USSR working class has experienced the destructive implementation of a capitalist system, extreme poverty and inequality, the mass political movements in these regions have not had decisively pro-working class agendas at their head. This was most exemplified in the Ukrainian ‘October Revolution’ and ‘Euromaidan’, where any social demands where drowned out quickly for the interests of the far-right, Western Imperialism and this or that section of the Ukrainian ruling class. There are a number of reasons of why the situation is so, but also why it cannot remain this way.

Savchenko is not an isolated case in war dissenters. Among the many Ukrainian journalist arrested, shot or forced into exile for their opposition, journalist Ruslan Kotsaba has recently been released from Ukrainian prison, and is continuing his criticism of the government. While their colleagues hurried to profit from the conflict for promotions, these individuals are vocally opposing the war at great risk. While they themselves do not have the ability to solve the contradictions that started the conflict and get rid of the oligarchy, it remains, that an immediate end to the civil war is wholly in the interests of the masses found on all sides of this conflict.