On 22 April a strike began at the six mines of PJSC "Krasnodonugol" in Krasnodon, region of Lugansk. The mines are owned by SCM, the company of Rinat Akhmetov, one of the country’s wealthiest businessmen and a key regional oligarch. 2000 miners gathered at the mine office, demanding the reinstatement of 30 miners who had been dismissed for participating in a rally in Lugansk. The striking miners demanded a wage increase to bring their wages up to the average wage of workers in the Donbas coalfield and the lifting of sanctions against their fellow miners. 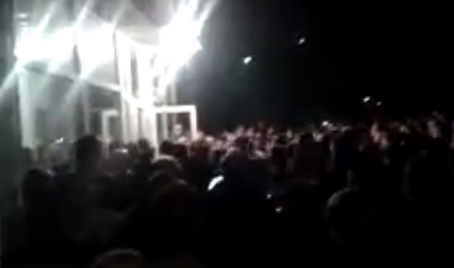 "80% of miners did not go to work and now we have stormed the Krasnodonugol offices. The situation requires publicity; otherwise we all get fired tomorrow."

At 11 pm on 22 April, after unsuccessful negotiations with the managers Angelovski and Pimkin, the striking miners broke down the front door and seized the mine office building. They blocked the entrances to the building, obstructed the bus service, and then started building barricades.

Today, 23 April pickets of miners blocked the road and stopped the buses which drove the day shift to the mines. In addition, there is a continuing a rally at the plant. The Miners’ demands have expanded to include strict observation of health and safety regulations as well as changing of company management.

It remains to be seen how the strike develops, but it is clearly a very significant develop which would mark the entry of an important section of workers into the scene with their own class demands.

See videos of the events here: