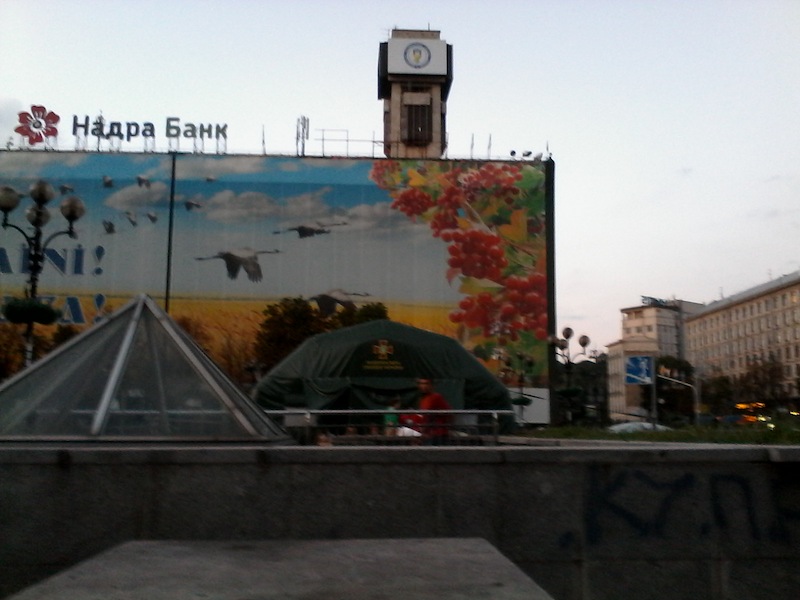 The Kiev mayor Vitali Klitschko and the Ukrainian government have forcibly removed the remaining Euromaidan protesters, clearing away protesters’ tents and replaced them with an army recruitment office. Claiming the objectives of Euromaidan accomplished and the movement no longer necessary, Kiev is reigning in the movement that had brought them to power.

The rotten fruits of the Euromaidan movement come to light

Whatever the original hopes and aspirations of the Euromaidan movement last December, events are making it clear that the movement has brought disaster for the Ukrainian people. While one could not sympathise with the corrupt government of Yanukovich, the reality is that now the grasp of the oligarchs over the economic and political system has grown, along with political repression. The Ukrainian Communist Party is in the process of being banned from parliament for “separatism”, despite having supported a united Ukraine.

Those who argued that the movement was “anti-corruption” are having a difficult time justifying this argument when you consider that, aside from Yanukovich, almost all of the other oligarchs remain in power; or the fact that these same oligarchs are beginning the largest scale privatisations and austerity measures in the country’s history. But the new regime is far from stabilised. Prime Minister Arseniy Yatsenyuk promptly resigned recently, stating that there was “nothing with which to pay civil servants” in the country’s budget, which is being increasingly diverted to finance the civil war.

Whilst the rebels in Eastern Ukraine are being bombed and shelled by the Ukrainian army, the rest of the country is being mobilised into the Ukrainian army. The government has used the events around the MH-17 disaster in order to boost pro-war propaganda and subsequent mobilisation around it. But the war hysteria fuelled by government propaganda has also been met with resistance. The appalling conditions that most of the Ukrainian troops – mobilised to suppress the uprising in the South East – have had to face has galvanised open defiance by soldiers’ mothers and wives, who have organised anti-mobilisation demonstrations across the country with the demand that the oligarchs’ children be mobilised first.

Why the move against Maidan?

Following the removal of Yanukovich in February, a fraction of the Maidan activists stayed, while most of them were organised into National Guard battalions, both funded by the government and individual oligarchs. These forces form the core of the government’s so-called “anti-terrorist operation” against the rebels in the East. Since many of the National Guard came from various far-right groupings, they have also attacked anti-government protests, left-activists of various kinds, as well as strikes, anti-war and trade union activity, making left and trade union activism in the country a serious risk. The activists that stayed at Maidan, despite having an extreme right-nationalist political orientation, maintained their presence with the stated goal of “holding the government to account on their promises”.

The relatively weak position of the government is the reason why, although what was left of the Maidan camp was a relatively small and insignificant presence, this proved enough of a nuisance for the government that they were forced to act against it. This move by the rulers in Kiev, however, is far from being a sign of strength. The Kiev regime is based on an unstable coalition of various fractions of the Ukrainian bourgeoisie. The action does send a message, however, to the National Guard battalions and the Maidan self-defense force, some of whom were mobilised to suppress what was left of the Maidan camp: the price for their existence rested on their loyalty to the oligarchs.

The unbalanced balance of power

Amidst the austerity program, privatisations, a civil war and the mobilisation for it, the oligarchs in Kiev have for the most part so far kept public opinion on their side. This has been aided by the fact that those in power personally own virtually all of the media sources in the country, with those not following the government line being censored. For the time being, Kiev has been able to sustain public opinion in the regions that they control; but for most of the ordinary people in Western Ukraine this government has just brought misery, austerity, price hikes, privatisations, violence and corruption.

The anti-war resistance in Western Ukraine has been relatively subdued for the moment; but it is poised to grow as more soldiers, sons and husbands are called to the front.

While the Ukrainian army has been making advances against the breakaway republics, even a possible defeat of the rebel military forces, which has still not been achieved, would open up further challenges. After months of shelling of civil areas and thousands of deaths, the Ukrainian armed forces are unlikely to be accepted as liberators by a majority of the population. The region will have to be “pacified” before it can be re-integrated into Ukraine’s economy, and it is unlikely that the regular Ukrainian army will be up to the task.

This will necessitate even heavier reliance on the Nazi and extreme Ukrainian nationalists who make up the backbone of the National Guard battalions. The situation gets more complicated when taking into account the fact that the battalions have loyalty to rival oligarchs, who may annul their truce once the rebels are defeated. Already there has been evidence of a rift between Kolomoisky and Poroshenko in their respective media arms.

The oligarchs are wielding their strength. Those who are not in line are swiftly put into their place. This calm however is limited, and sooner or later the power that they wield will be turned against each other. When the ruling class turns in on itself, this opens the door for revolution. Whether this revolution is a socialist one, depends on the revolutionary movements outside Ukraine, and on the building of the left and the combat against fascism in Ukraine today.