Ukraine
Share
Tweet
After seeking the payment of several months of wages owed to them the workers at the KNF factory in Kherson, Ukraine, have decided to occupy the plant. Here we provide a brief report sent to us by Russian Marxists.

On Tuesday morning, February 3, the workers at the Kherson Machine Building Plant, KNF, (that produces agricultural machinery) occupied one of the factory's buildings. At 9.30am more than 300 KNF workers broke into the factory grounds and occupied the administrative building. 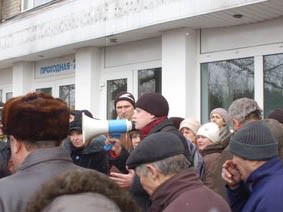 During this occupation none of the workers were injured, as the local security guards didn't put up any serious resistance. The workers took over the KNF administrative building and demanded nationalization of this Ukrainian strategic enterprise together with the demand for payment of wage arrears.

One worker that took part in this action told journalists that workers had not received their wages since September and that they are ready to fight until victory. The strikers have approached the workers from the Lvov Bus Factory and other factories for solidarity.

Now the workers are in the building and many more are outside holding up placards. According to eyewitnesses the general situation is normal, but more and more people are coming to join the strikers.

Viktor Shapinov of the Marxist Tendency that is supporting the workers' action explained that, "Now the factory is totally under workers' control, the situation is being monitored by the workers' council, lead by Leonid Nemchinov. There is no police around the building."

According to Shapinov, the decision to occupy the factory was taken after the authorities refused to grant permission for a demonstration in the city centre of Kherson, where hundreds of KNF workers took part. 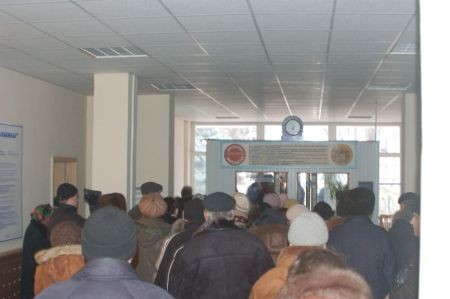 "People don't have any choice. They haven't received any wages since September 2008. Back wages come to 4,478,000 hryvni (US$600,000 thousand). In the last meeting with the management the employees were informed that the bosses are not interested in save the factory. Almost 1300 workers would lose their jobs, while factory equipment was started to be moved out for scrap metal" explained Viktor Shapinov.

The main demands of the KNF workers are: all back wages to be paid, the factory to be nationalised without any compensation to bosses that are sabotaging industrial production.

The following is what we can read in the declaration of the KNF workers: "We demand this emergency situation be solved within one week, or we will start extreme actions of protest to protect our families from cold and starvation. The effects of the closure of this strategic enterprises should be understood by the government: a fall in revenues for the budget, the destruction of more than a thousand jobs, the additional costs of importing foreign-made machines, and greater social problems in Kherson."

Shapinov added that, "On Thursday, the workers held talks with the Kherson district (oblast) governor, but there was no concrete proposal to solve this problem. People are ready to fight until the end"

We should recall that the economic situation in the Ukraine remains extremely difficult. In the last few months industrial production in this country has fallen by a third and continues to go down.