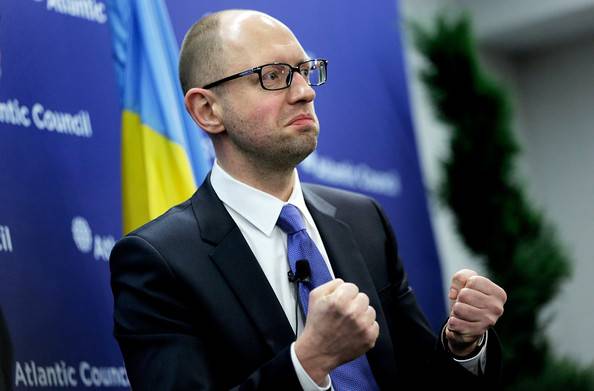 Ukrainian Prime Minister, Arseniy Yatsenyuk, has announced that: “Ukraine will experience the largest privatization plan in its history” in the name of fighting corruption.

Cutting off the leg to save the foot

The government of Ukraine will look at a draft law next week, which proposes the “largest privatization plan” in the country’s history. This was announced by Prime Minister Arseniy Yatsenyuk at the agrarian forum.

“Next week, the government of Ukraine will discuss a bill that will consider a draft law on the list of government entities that are not subject to privatization. After this, we will announce the most ambitious privatization in 20 years," - he said according to ITAR-TASS. The largest producer of alcohol in Ukraine - the company "Ukrspirit" - will be given to the private sector, along with a number of other state-owned enterprises, "which are sources of corruption, not the development of Ukraine."

The energy minister Yuri Prodan (which ironically means “sold” in Ukrainian) announced the privatization of all the energy resources with the exception of some pipelines and ministry offices. The government later added that the plan included the privatization of its 50% stake in Ukrneft (state oil company) and 75% stake in Turboatom (hydroelectric plant). Also included was the Odessa port factory along with several mines.

What Yatsenyuk is proposing "to combat corruption" is the very cause of Ukraine losing 60% of its industrial capacity since the fall of the USSR. Once possessing one of the leading economies in the world, Ukraine has been reduced to a nation with staggering amounts of unemployment and poverty.

Most of Ukrainian industry was privatized in a share scheme, which ultimately led to the concentration of Ukrainian industry in the hands of a select few oligarchs, many of whom now – including the president Poroshenko and the leader of Yatsenyuk’s party Tymoshenko – sit in parliament. If the members of the Ukrainian parliament cannot be classified as corrupt, then the term has no earthly meaning.

The oligarchs, rather than developing industry, have played a largely predatory role, dismantling much of the production for scrap metal, and shipping their profits offshore as opposed to re-investing. The industries that they have kept going have mostly consisted of raw materials such as coal and steel; industries that have a base in the south and east of the country.

But why is it now, after the disaster of privatization, do the oligarchs find it opportune to privatize “as they never have before”? To find the answer, one has to look no further than who Ukraine is indebted to.

Since 2004, Ukraine’s debt has risen from around 20 billion USD to nearly 150 billion USD. Much of this debt is to the members of IMF, who promised another life raft of 17 billion USD in April. Where goes IMF debt, so do IMF economic measures. The first phase was seen earlier this year with the cut to heating gas subsidies and the layoffs of state employees. Now begins the phase of privatization, which will mean a reduction in state revenue and downsizing in privatized factories.

Who profits from the privatizations?

Judging from the composition of parliament, they will be expecting the usual kickbacks from the firesale of state industry. Some of the oligarchs will buy the industries at a fraction of their true value, and incorporate them into already established business empires. Foreign companies will want the biggest piece of the action. With certain industries, they will take advantage of the low cost of labour, poorly enforced labour laws and weak trade unions. Another part of the industry could be scrapped or have its capacity and labour force reduced, in the cases where it is deemed uncompetitive in the global market as was partially done with Kryvorizhstal – once the world’s leading steel producer.

The government itself estimates that it will only gain 29 million hryvnia (2.5 billion USD) from the program, well short of anything that could save the Ukrainian economy. The turmoil from this is likely to make it worse. It is possible that the oligarchs in power today see that their time and popular support can be short lived. The war-hysteria that they are blinding Ukrainians with will in time give way to harsh realities.

The reality for the Ukrainian people is ultimately, more layoffs, paycuts and cuts to public services. The government will claim that this will stimulate foreign investment. But who wants to invest where virtually every global market and industry have been downsizing for the last several years from the crisis of overproduction? These magic investors, if they do arrive, will come with demands for modifications in the labour code that will ultimately reduce the living standards of workers.

The Ukrainian government wants to cut off the leg. If the Ukrainian people have real aspirations for a “European standard of living”, they must do as the French in the late 18th century: cut off the head. 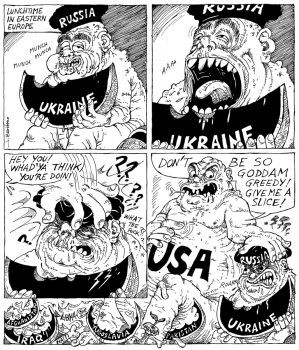