The first time I saw a comparison of the war in East Ukraine with the Israeli-Palestinian conflict was three weeks ago in an article by the liberal journalist Vitaly Portnikov in portal Facets pv. Today, this analogy is already established in the Ukrainian and Russian liberal mainstream. "Israel and the Ukrainian regime -are seen as the embodiment of European civilization, light and goodness. Palestinians and eastern Ukrainians are terrorists, "quilted", "scoops", and can only understand the language of bombs and missiles." 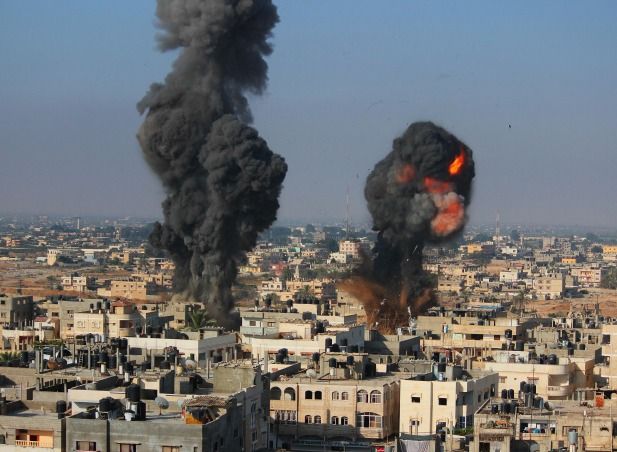 It is possible that the similarities between Israel and Ukraine are not that far from the truth.

First, both in Palestine and in the Donbas there is, in essence, a colonial conflict. Israel is the last classic colonial state on the globe, aiming for the suppression of the indigenous Palestinian population in the occupied territories and the destabilization of neighboring countries that may pose a threat to it.

The death of the three young settlers is only a pretext for another military operation, without which the New Sparta can not exist. As early as 1955, Moshe Dayan said: "Retaliation is the root of our life, without which we would not have been warring people, and people without a belligerent regime are already lost."

But can Spartans can live without another Crypteia? A way to understand the motive and reason for the launching of "Operation Enduring Rock" in Gaza, is to see the it as an Israeli response to the collapse of the US policy in the Middle East, the destabilization of Iraq and the strengthening of Iran. Apparently, the Israeli cabinet decided it was time to show the presence of the Israeli bully operating from Tel Aviv.

In turn, in the East of Ukraine, the junta's president Poroshenko is busy with the internal colonization of the country in the interests of the European Union, the leaders of the nationalists and oligarchic groups. Nationalists refuse to recognize the ethnic, linguistic and cultural diversity of Ukraine and called for the expulsion from the country of the "wrong" people in the Eastern regions. In other words, they seek to "Ukrainise" the land, in odds with a diverse population. The European Union is interested in the elimination of Ukrainian industry that is concentrated in the East and in in the transformation of Ukraine into a supplier of cheap labor and a market for European (and primarily German) products. Oligarchs dream of looting state property and the property of their eastern competitors.

Second, Ukraine has imported colonial methods of warfare practiced by the Israelis. First, this phenomenon occurred in beginning of the XX century, when, starting with the First World War, the Europeans began to use against civilians in neighboring countries tried and tested methods of terror and genocide. Mass murder and ethnic cleansing were applied in India, in the Congo, in Asia Minor and in Ireland. Between the years 1914-1945, these methods were directed in Ukraine against Jews, Serbs, Roma, Russian, Ukrainians, Poles.

Today, Israeli innovations in the "war against terror" have attracted the admiration of right-wingers and fascists and are currently put in practice in the post-coup Ukraine. We now see many incidents of kidnapping, torture, collective punishment, the bombing of residential areas, and influx of tens of thousands of refugees forced to flee. Israeli practices have now become Ukrainian.

Third, the wars in Israel and the Ukraine were accompanied by unprecedented fervor of nationalist hysteria. The Odessa fire, riots in Kharkov, Mariupol and Kiev and the excesses of neo-Nazi gangs preceded the beginning of the so-called "anti-terrorist operation" in the East. In Israel, the settlers and Israeli fascists beat Arabs in markets and burned alive Arab teenager. It should be noted that these outbursts of anger and violence were hard to predict years ago. In fact, what we are seeing is the result of years of nationalist propaganda waged at the state level and the degradation of society due to neo-liberal reforms. No wonder Ukraine and Israel are some of the most right-wing countries in the world. Right-wing and nationalist ideologies inevitably lead to hatred, violence and war.

Finally, the fourth and final parallel between the two conflicts is that this adventurism can lead to isolation and to unpredictable events. Israel, of course, is not a stranger to dancing with lighted matches next to barrels of oil, but this time, another demonstration of its power can be a double edged sword. Israel borders in the north with war-torn Syria and to the east with Jordan - the only country that is not affected by the Arab Spring, but which is bordering on belligerent Iraq, and is also the country where the majority of the population are Palestinians.

The first surprise presented to Tel Aviv by Hamas were the long-range missiles ruptured on Israeli cities which Israel did not expect. The first victim of these attacks was the myth of the unity between Israelis in the face of an external enemy. The first rockets launched by Hamas landed not in poor cities of the south but in citadels of the Israeli "middle class", who hurried to close the doors of their luxury shelters to poor residents once the rockets stroke.

More "exciting" prospects expect Kiev while the current military adventure is at its early stages. The capturing of the Donetsk milita leader Strelkov has been delayed and the operation may require a prolonged period of time. In this context, the statement that "Ukraine - is the new Israel" , meaning that Ukraine is a militarized, as Israel has been belligerent for a half a century, does not sound to promising. No one still does not knows how Poroshenko's government is going to take control of the oligarchs and fascist death squads. The prospects for the Eastern Ukraine economy are gloomy as the army is bombing cities and leaving tragic traces.

So Mr. Portnikov and his supporters are probably right. There are strong similarities between Ukraine's "anti-terrorism operation" in East Ukraine and Israel's "Unbreakable Rock" operation in Gaza.