We have received further news about the Tekel workers in Turkey. As a result of their determined struggle trade union confederations have pledged a general strike if the government fails to meet their demands by January 26. This marks an important step on the road to winning this dispute. Please keep on sending solidarity messages! 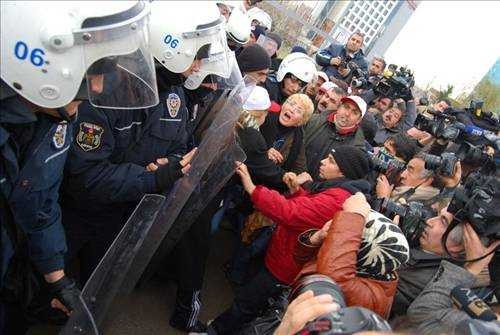 As protests by workers from the country’s former state-owned alcohol and tobacco monopoly, or Tekel, continue, union confederations have pledged a general strike if the government fails to meet their demands by January 26.

Some workers have held a sit-down strike in front of the Confederation of Turkish Labor Unions, or Türk-İş, headquarters in the capital, while other workers, including many women, began a hunger strike Tuesday at the same venue.

If the government does not respond by that time, the confederations will convene again on that date to identify a day for the general strike. The workers also put the hunger strike on hold until January 26 as they await developments.

Please send messages of solidarity and support to This email address is being protected from spambots. You need JavaScript enabled to view it.. We will pass on these messages to the Tekel workers.