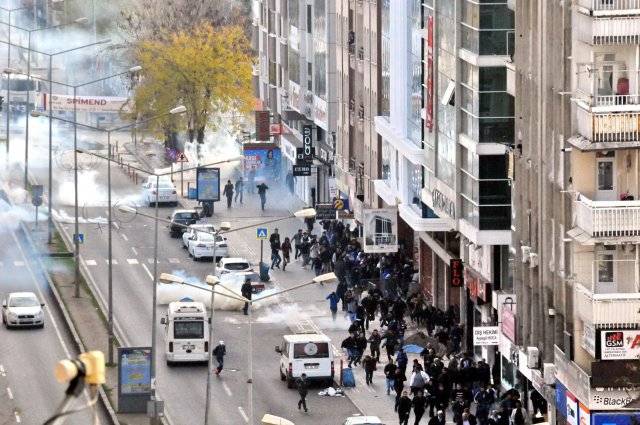 Fierce clashes are taking place between activists and police on the 11th day of siege in the Sur district of Diyarbakir. Furthermore, the governor's office in the province of Sirnak has announced new curfews in the districts of Cizre and Silopi. Having regained a parliamentary majority in the recent elections, it is clear that President Recep Tayyip Erdogan and his AK Party have no intention of bringing to an end their unilateral war on the Kurdish population in Turkey.

Thousands of peaceful protesters have been dealt with violently by the Turkish state security forces as a result of the ongoing “anti-terror” operations in the Kurdish areas of Turkey. The Sur district of Diyarbakir has been a particular target for almost two weeks where the armed forces have attacked with indiscriminate bombing and shooting, leading many people to compare it with the state Kobane was in after the battle there between ISIS and Kurdish fighters (see images here). Only after nine days of indiscriminate violence was a brief window opened up for some of the civilians to leave the area, which the state claims have been “infiltrated” by terrorists - i.e.PKK fighters.

“We were not able to go outside because of the intense clashes. We ran low on water and food and our homes were damaged,” one Sur resident told the Dogan News Agency.

Just today two young men, 18 and 21 years of age, were killed and two others injured - these num 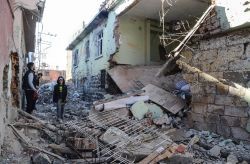 Sur neighbourhood after 9 days of "curfew" 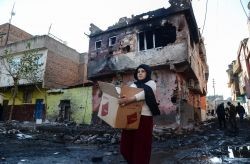 Sur neighbourhood after 9 days of "curfew"bers will undoubtedly rise as the state crackdown intensifies. Today the Peoples’ Democratic Party (HDP) announced a march to protest the curfew in the Sur district. However, the Diyarbakir Governor’s Office stated that the march was unlawful, urging citizens to disregard the calls.

A large protest that tried to enter the district on Sunday was opposed by the Police which has cracked down on all protests and signs of opposition in the southern city and home to almost one million, mostly Kurdish people. Meanwhile, thousands of shopkeepers have closed down their shops in protest across the province.

The curfew, which was imposed on six neighborhoods and a major central street of Sur started on 2 December after clashes broke out in the wake of the assassination of Tahir Elçi the president of the famous Diyarbakir bar association. He was murdered in a clearly state engineered assassination on November 28, after he made several defiant speeches against the security forces and their campaigns in the Kurdish parts of Turkey.

This morning, curfews were also announced in the districts of Cizre and Silopi in the province of Sirnak. Already before the announcement of the siege, the Directorate of National Education had student dormitories evacuated, and hospitals were asked to “hold their staff and materials ready”. Reports are coming in that police teams have started patrolling in convoys of armored vehicles and randomly opening fire.

In the meantime, as many as 150 armoured military vehicles have been positioned at various locations across Silopi. A number of cargo planes carrying military personnel and materials have reportedly landed in Serafettin Elçi Airport. According to ANF, military forces have also set up five checkpoints between Sirnak and Cizre, and others on the Cizre-Silopi, Cizre-Idil and Cizre-Güçlükonak roads.

Having won his parliamentary majority by promising to bring stability to Turkey, Erdogan is stepping up the civil war against the Kurds which he started during the summer. Since August 16, there have been 52 open-ended and round-the-clock curfews in 17 provinces of 7 Kurdish cities that house approximately 1.3 million people.

In the same period, the so called “war on terror” has led to thousands of leftist and Kurdish activists to be arrested along with only a few hundred ISIS members, who were alleged to be the main aim of the campaign.

Until last June the PKK and the Turkish government were in serious peace negotiations and hostilities had stopped after years of a bloody civil war. However, in the June parliamentary elections the HDP, a leftist and Kurdish based party, became the third largest parliamentary force on the basis of rising class struggle and a radicalised Turkish and Kurdish youth. This was the biggest setback for the AKP since it came to power in 2002 and ruined Erdogan’s plans of changing the constitution to concentrate powers in his presidency.

It was on this basis that Erdogan, leaning on his old nationalist foes, attempted to whip up nationalism by starting a civil war against the Kurds and leftist forces of Turkey. This is a reflection of the crisis of the Erdogan regime, which after years of stability based on an economic boom is seeing a rising tide of dissatisfaction as the economy, affected by the world economic slowdown and Erdogan’s recklessness, enters a crisis.

The electoral victory of the AKP on 1 November was won on the basis of this nationalist hysteria, along with a promise by Erdogan to bring stability, but as we can see, this will not materialise. The PKK has offered a ceasefire on several occasions. In fact the organisation proclaimed a unilateral ceasefire during the whole election period, but Erdogan is not interested in peace. Under the guise of a civil war, Erdogan is attempting to further consolidate his own shaky rule. But by doing this he is destabilising the whole of Turkish society and laying the ground for the potential disintegration of the country at some point in the future.

Meanwhile in many areas, barricades are being erected by Kurdish youth and activists connected to the YDG-H - the youth wing of the PKK - as the movement tries to defend itself against the onslaught of the Turkish army, which is one of the largest and most modern armies in the world. However the PKK related forces that Turkey is fighting today are very different from the ones it fought during the ‘90s.

At the same time the success of the YPG in Syria and in Kobane in particular has provided them with arms, training as well as prestige. Along with this they have also adopted the effective, mass based doctrine of war used by the YPG. Matthieu Delmas, a journalist who was in the city of Delmas during one of the sieges, told Middle East Eye that, “While the PKK only conducts guerrilla warfare and are based in the mountains, the YDG-H has taken the combat zone to their home towns and cities,” he added that, “The YDG-H only fight in their own neighbourhoods and therefore all the locals support them. They say they are our sons.”

This makes the youth organisation compatible with the rising mass struggle and opposition to the oppression of the regime and has made it able to step into the vacuum for a force to organise the defence of the Kurdish areas under attack.

With their courage and heroism they have shown that they cannot be crushed by the Turkish army. The YDG-H must reinforce this defence by organising defence and popular committees throughout the Kurdish areas and connect these on a regional level. But in order to win against the oppression of the Turkish ruling class, it is not enough to defend one self, but equally important to go onto the offensive. In spite of the capabilities of the Kurdish fighters, they cannot overpower the Turkish army through the military struggle alone.

The main challenge to defeat the Turkish ruling class remains the political struggle for the unification of all those who are oppressed and exploited by it. That means uniting with all other national minorities, but most importantly the Turkish workers and youth, against the Erdogan regime.  It is the duty of Kurdish revolutionaries to raise the banner of all the oppressed masses in Turkey in order to break the state apparatus along class lines. We saw the potential for this in the Gezi Park movement and the rise of the HDP.

At a certain stage the class struggle will rise again on an even higher level. We must not forget, in spite of Erdogan’s formal victory, that the majority of the Turkish voters voted against Erdogan and the AKP in the two previous elections.Turkish capitalism is incapable of solving the problems of the masses which is why the class struggle has been on the rise the recent period. That is the basis for violent swings and barbaric actions of Erdogan who is trying to cling on to power. The only way of solving these problems and uproot the reactionary trends in the country is to fight against the system which spawns them and which is becoming a threat to Turkey itself.