The TEKEL workers have shown once again what the Turkish working class is capable of. This is a class with a glorious and heroic tradition of struggle. It has risen in the past. It is now beginning to rise again. The TEKEL workers deserve all the support workers inside and outside Turkey can provide. Their struggle is our struggle. 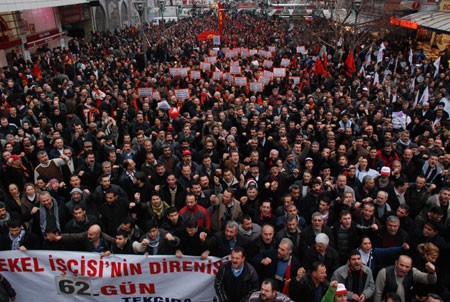 Although Turkey formally has a bourgeois “parliamentary system”, the military has always been a major factor in political affairs since the formation of the republic. There have been three coup d’états orchestrated by the top brass in Turkey, the latest of which was on September 12, 1980. That coup, led by the then Chief of General Staff, Kenan Evren, who later installed himself as the president of the country, crushed the workers' movement and student uprising with the whole might of the state. Major limitations were put on unions and labour organisations by the junta.

One can say this was simultaneous with the defeat of many workers’ movements worldwide (like the miner’s strike in Britain in 1984-5), and the rise of so-called neo-liberals like Thatcher and Reagan. Since the turbulent 1960s and 1970s, the courageous Turkish working class has been relatively quiet, until now that is.

On December 15, 2009, workers of the former state owned tobacco and alcohol producer TEKEL, converged on Ankara, the capital city, from all over the country. They were provoked into action by the government's decision to close down their workplace without any guarantee for their welfare. If the government had had their way they would no longer be classified as workers and, therefore, would have no legal rights as workers, including union representation.

The government is proposing demoting the status of workers to that of causal labourers without any guarantee of renewing their contracts at the end of a one year period. Also, workers are being asked to accept a near 50% reduction to their current salaries. These are the proposals under the 4-C statute, which the workers, quite rightly refuse to accept. The workers and trade union leaders are demanding that the workers of the privatised industries be given jobs with equal levels of pay and benefits within other public institutions. In other words, they want to preserve their pay and conditions, which is their fundamental right.

Thousands of workers set up camp outside and near the Turk-iş building, the Turkish trade union confederation, to which Tekgida-iş (the union of the TEKEL workers) is affiliated. The workers have braved the wintry conditions to show they will not relent in the face of attacks on their well-being.

There is widespread support for the TEKEL workers from the four corners of the country and beyond. The workers, most of whom voted the AKP (Justice and Development Party) into government, have been offered solidarity from various left-wing groups and radical students, visiting the workers, bringing them supplies and generally supporting them in any way they can. The workers have become aware of who their enemies are and who their friends are. There has been a transformation of the consciousness of the workers. One worker, when interviewed said:

“...I am a true believer in Islam. I pray to God 5 times a day. But now in this resistance I have learned what communism is. The university students who have come here everyday told me about Lenin and communism. Now I have become a Communist..."

This is a clear example of how human thought obeys the laws of dialectical materialism. With the dramatic change in the material conditions, this worker, who most probably voted for the reactionary and class enemy AKP, has now become class conscious and also aware of the role the backward AKP is playing in impoverishing him and his fellow workers. We must also recognise the efforts of all those who have supported the workers and offer them our praise.

There has been a media offensive, describing the workers as “earning very large salaries” and “owning their own homes and cars”. We would answer these absurd slurs: everyone is entitled to decent living conditions, including a decent home and even decent transportation; secondly, the average salary of a TEKEL worker is around 1,600 TL per month or around £650. If the workers were to accept the 4-C statute, their salary would be reduced to 800 TL. Workers have a right to defend their pay and conditions, especially against such a brutal attack as this is.

In the beginning, the government refused to negotiate with the trade union leaders but at the end of January, with the build up of pressure from all directions, they had relented. The talks broke down because of the stubbornness of Mr. Erdogan and his cronies. Turk-iş general secretary Mustafa Kumlu announced that on the 4th February all the trade unions affiliated to Turk-iş would use “the right not to work” in support of TEKEL workers, effectively a general strike. The general strike served to increase support for the workers and further expose the government. Many clashes with police and security forces were reported on the day of the strike, again demonstrating the contempt of the state for the resisting workers.

The AKP, basing itself on traditional Islamic values, has always managed to portray itself as a supra-class party, with supposedly the interests of all at heart. But, the struggle of the TEKEL workers, and subsequently the attitude of Mr. Erdogan and his party has revealed to the masses of Turkey its true colours. Defiant, Mr. Erdogan once said, “it was not the TEKEL workers who put us in power, it was my people”. It seems this well educated gentleman has made the stupid mistake of not realising that the TEKEL workers along with the millions who support them are the vast majority of “his people”, the same people who will bring him down.

Turkey is dominated by the imperialists, especially of the American kind. The compradore bourgeoisie in Turkey has played a most reactionary role in the past and is continuing to do so. With the burden of the IMF loan being placed on the working class, as well as the limitations imposed by the IMF on production and public spending, the working class in Turkey had long suffered. With the global economic crisis attacks on ordinary people have intensified. Turkey officially has around 11% unemployment, but the real figure is probably in the 20% region. Unemployment along with a deterioration of living conditions for ordinary people is set to rise in the current economic climate.

The workers of Turkey have shown immense support for the TEKEL workers, as this struggle is also their struggle. The ruling class of Turkey, led by Mr. Erdogan with his strings tied to Washington, will try with all their might to make Turkish workers pay for their crisis. These assaults must be resisted by organising and strengthening the trade unions and supporting all workers in all sectors against the onslaught.

We offer our support and solidarity to the TEKEL workers. We have publicised their struggle and appealed for solidarity, which has been taken to the workers in Turkey. We have a short message for Mr. Erdogan: you cannot win against a well organised and united working class, the heroic proletariat of Turkey is now on its feet. The TEKEL workers must win.