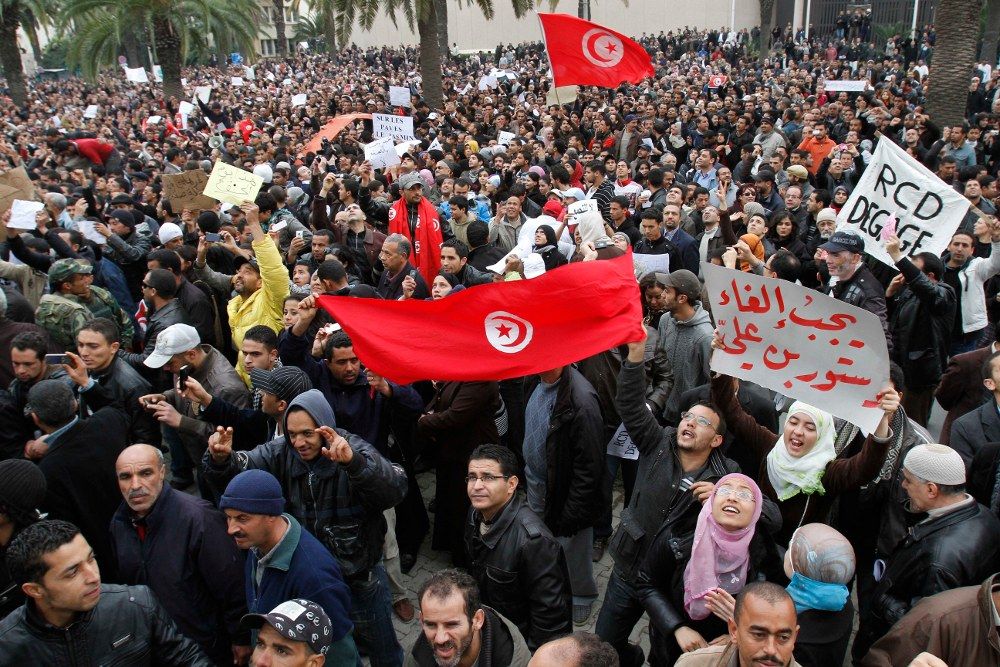 Today marks one month since the revolutionary overthrow of the hated dictator Ben Ali in Tunisia on January 14. The last month has been a constant struggle between the ruling class which wants to return to bourgeois normality and workers and youth who carried out the revolution and who are struggling to stop the old regime from trying to make a comeback.

For nearly two weeks after January 14 the country saw a series of regional general strikes and mass demonstrations against the new Government of National Unity (GNU) of Gannouchi. All the key ministers (Defence, Foreign Affairs, Prime Minister, President, Finances, Home Affairs, etc) of the GNU had been ministers under Ben Ali, many occupying the same positions.

The pressure from below forced the national leadership of the UGTT to withdraw from this government, and its local structures played a key role in mobilising against it. The revolutionary youth from the regions marched on the capital Tunis on January 23, with the aim of speeding up the overthrow of the government of Gannouchi. Once in the capital there was a march on the Prime Minister's office in the Kasbah where they set up camp, effectively preventing the GNU from working from its offices.

The wave of regional strikes reached its peak with the historic strike of Sfax, on January 26, when 100,000 marched through the streets of this industrial city, and also the unprecedented march of 20,000 in Sidi Bouzid on January 27. On the same day a long awaited ministerial reshuffle was announced, which removed from the GNU most of the ministers who had been members of Ben Ali’s RCD, but left untouched the Prime Minister Gannouchi and the President, both part of the Ben Ali regime.

However, since no clear lead was given by anyone, the formal acceptance on the part of the UGTT leadership of the Gannouchi government gave a certain room for manoeuvre, a degree of legitimacy which it did not posses before. It quickly used it, on January 28, by unleashing brutal repression against the youth camped at the Kasbah esplanade, who were dispersed and sent back to their regions of origin.

Revolution is a war between the classes and like in a war between nations, leadership is crucial. Once the momentum is lost, it is difficult to regain it again. For two weeks, between January 14 and January 27, the GNU was suspended in mid-air. The revolutionary workers and youth could have taken power. This was graphically demonstrated on January 22 and 23 when the people marched on the Prime Minister's office and all that the officer in charge of the Army guarding the building could do was to ask them politely not to enter the premises. Police officers were demonstrating all over the country demanding their right to form a union. There would have been no force capable of stopping the revolutionary masses from taking power.

It is true that the January 14 Front, a coalition dominated by the formerly banned Tunisian Party of Communist Workers (PCOT), was firm in its opposition against the GNU and called for the committees to be strengthened at all levels. In a communiqué on January 28, after the government reshuffle and the vote at the UGTT Administrative Council, it even called for a National Conference for the Defence of the Revolution to elect a provisional government. But it never went as far as actually convening such a national congress of the committees, something that could have been done taking advantage of the presence in Tunis of the revolutionary youth from the provinces. This would have been possible before January 27, but more difficult after the GNU had gained legitimacy from the UGTT.

Even though many opportunities were missed, this is not to say that the revolutionary initiative of the masses has ebbed completely and that the Gannouchi government is in control of the situation. On the contrary, the overthrow of Ben Ali has unleashed all the pent up frustrations of all sections of society. The revolution has changed their outlook: “we are not afraid anymore” and groups of workers and youth all over the country are taking direct action, with no respect for any established authority (which are after all just a leftover of the old regime). There was even talk of the Imams of the mosques wanting to set up a trade union!

In state owned companies, ministries and departments, workers have organised in committees or through the union and kicked out the old managers and in some cases have refused to accept the new ones appointed by the government which has been forced to change them again. The civil servants at the Ministry of Foreign Affairs went on strike and organised sit-ins until they got the removal of the Minister Ahmed Ounaies, on February 13. It is clearly not a normal situation for the ruling class when the government appoints a minister and the workers at the ministry kick him out!

In many official media outlets, newspapers, TV and radio, the workers have organised and forced the removal of the managers and in varying degrees taken control over the editorial line. In one case, they even rejected the newly appointed manager as they had not been consulted. 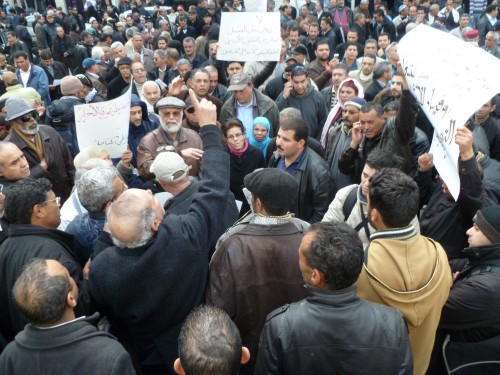 5 February, rally for trade union democracy, Tunis. Source: intal.be On February 3, the government decided to appoint new regional governors. This was another important step towards bourgeois normalisation. The overthrow of Ben Ali had meant the complete collapse of state power in many towns and even some regions. Revolutionary committees and councils had taken over the running of public affairs. From the point of view of the ruling elite it was important to reassert the power of the capitalist state over them.

Revealing its true colours, 19 out of the 24 “new” governors were connected with the RCD and the old regime. This was too much of a provocation and it provoked a new wave of demonstrations and strikes in the regions, in some cases leading to the expulsion of the “new” governors (as in Gabès, Kébili, Zaghouan, Nabeul and Béja), often protected by the Army. In Redeyef (in the Gafsa mining basin) a general strike for a combination of political and economic demands paralysed the town (video). In Kasserine, El Kef and Kebili the clashes with the police and in some cases the army led to several demonstrators being killed ? the first victims killed by the Gannouchi government. In Zaghouan the revolutionary people expelled the local council (video). In all of these towns it is the committees for de defence of the revolution that have effective control over public order.

Once again, the government has been forced to withdraw its decision and on February 8 announced that a new set of governors would be appointed “in consultation with the UGTT”! This is unprecedented and it shows the real balance of forces, even today. The official government appoints governors, which are then rejected and expelled by the people, and the government has to go and negotiate with the trade unions the appointment of new acceptable governors. Who rules the country? The government of Gannouchi or the revolutionary people? There are clearly elements of dual power still present in the situation in Tunisia.

The government was also forced to decree the dissolution of the RCD on February 7, another of the demands of the people, in a further attempt to appease the masses. At the same time, in order to deal with the question of its own legitimacy, Gannouchi had to ask from Parliament powers to rule by decree. This is yet another provocation, as it means that the Parliament which gives Gannouchi his powers is Ben Ali's parliament, composed overwhelmingly by RCD deputies (the party which has just been disbanded!).

Clearly, while the government of Gannouchi has taken some steps towards asserting its power, the situation is still very much in flux. All the economic and social grievances that gave rise to the revolutionary movement are still present, and they cannot really be solved under capitalism. A foreign diplomat warned that “the people have shown great maturity, but they could descend on the streets again”.

An article in AFP aptly summarises the situation of revolutionary ferment which is still present in Tunisia: “From north to south, the country has become for the last two weeks a permanent demonstration: sudden strikes, wildcat stoppages, daily demonstrations by employees and the unemployed who yell demands silenced for more than a quarter of a century. Every day the national TV brings from the provinces images of the angry cries of misery and distress.”

The government can only rule by relying on the UGTT leadership. It has just announced “national negotiations on a wide range of social issues”. UGTT leader Abid Briki warned that these negotiations were in the interest of the government because otherwise it risked “a social explosion”. What the government really needs is for the UGTT to police the growing wave of strikes. The UGTT leaders, headed by Abdesselem Jerad (who was a loyal supporter of Ben Ali until the very last minute) would be quite happy to fulfil that role, if they could. Jerad was on national TV asking his members to be patient, to “delay” their demands and above all, to “coordinate all their actions with the national leadership”. As a matter of fact, the UGTT national leaders do not lead this movement, they never have. Briki admits that they do not “coordinate or organise all of these strikes … the UGTT has been overtaken by these social movements”.

The leadership of the UGTT itself is contested, with regular demonstrations outside its central headquarters in Tunis demanding the democratisation of the union and the removal of Jerad and his accomplices because of his collaboration with Ben Ali. In one of these demonstrations Jilali Hammami, general secretary of the postal workers explains: “all those involved in class collaboration with the old regime, who have sold out the blood of the martyrs, must go. We demand a genuine trade union democracy and a militant trade union at the service of the working class. We will not allow counter-revolutionary forces to steal the revolution.”

A commentator in a business newspaper compared the situation to the French Popular Front and the wave of strikes of 1936 in France. “Who is at the helm?” he asked. His conclusion was that Tunisia needed her own Maurice Thorez, the French Stalinist leader of the PCF who “had the courage to bring the strikes to a halt”. The problem for the ruling class is that the Tunisian Thorez's of the former communist party Ettajdid have been widely discredited for their collaboration with Ben Ali. They are actually part of the Gannouchi government and were from the very beginning. The Thorez's are only useful to the ruling class if they are actually able to keep the working masses under control. This is clearly not the case in Tunisia.

One month after the revolutionary overthrow of Ben Ali, the Tunisian revolution has only started. The only thing missing is a revolutionary leadership with a clear understanding of the tasks ahead. The workers and youth have shown enormous courage and given nearly 300 of its finest representatives to the cause of radical social and political transformation of the county. All these sacrifice must not be in vain. The process will have its ebbs and flows, but the fundamental contradictions which brought about this revolution cannot be solved within the limits of capitalism. The most advanced elements need to understand that and stand firmly on a programme of workers’ power and international socialism, the only way to complete the Tunisian revolution which has started.

The words of the mother of one of the martyrs in Kasserine sums it up: ?"We're watching events, but if nothing real changes in people's lives here – no equality, no opportunities, no chance to work, the stranglehold of the RCD party – we'll stage a new revolution."