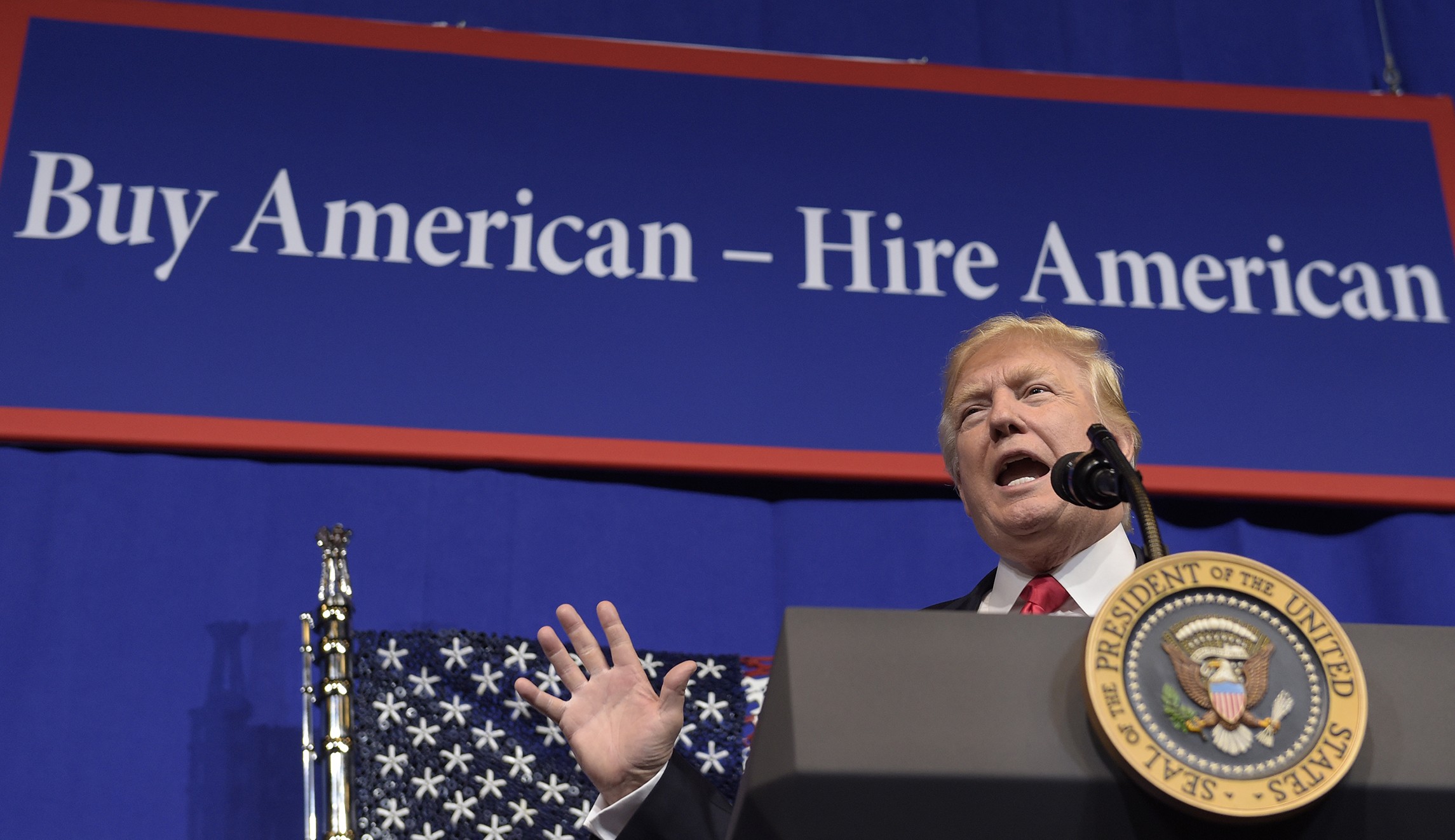 On Thursday the deadline passed for an agreement between Trump and Canada, Japan, Mexico and the EU on trade. Failure to reach an agreement meant that the steel and aluminium tariffs threatened by Trump came into force. With this, Trump has begun the process of unravelling globalisation. On Saturday, the G-7 finance ministers met and the 6 non-US ministers came together against the US, expressing their “unanimous concern and disappointment” over the US decision.

The French Finance Minister (and France is particularly annoyed with the US over Iran) joked that it was the meeting of the G6+1 (in reference to how Russian participation often is referred to as G7+1). This is a damning indictment of relations between the US and its closest allies.

Not only has Trump managed to anger China and Russia, but also the US’s most important allies. The fact that he cited “national security” as a reason adds insult to injury. As the Canadian Finance Minister pointed out it “is absurd to think that Canada could in any way be a security risk to the United States.”

Among the US establishment this is of particular concern because they are worried about China, and about Chinese industrial and trade policy. They would like to use the EU and Japan as levers against China, something which would be entirely on the cards. In fact, in the trade negotiations in China, the US has been simultaneously raising two concerns. Trump has been pushing to force China to buy more US products, whilst the US ruling class in general is concerned with intellectual property and the (forced) transfer of technology to China. This reflects the deep division that exists between the Trump administration and a significant section of the US ruling class.

The dispute between Trump and the rest isn’t just a question of tariffs, so much as a question of the principle of free trade in general. The EU has tariffs against Chinese steel, implemented at the height of the steel crisis a couple of years back. Trump wants the EU to agree, not to this or that measure that could benefit a US company and thus boost exports, but to a whole swathe of goods. As with China, he wants the EU, Canada, etc., to agree to reduce their trade surpluses with the US.

From the standpoint of any economic theory, this is madness. The whole point of international trade is to improve efficiency through global competition, which works best without restrictions. This is the famous invisible hand of Adam Smith, according to which resources will be allocated in the most efficient manner if the market is left unfettered. Adam Smith was arguing against the previously prevailing theory of mercantilism, which strove to maximise profitable trade. This remains the general ideal that has been promoted in international relations for a whole historical period. The argument goes that if everyone lowers their barriers to trade, everyone will benefit.

Free trade promotes competition, and through competition the development of the productive forces, pushing out workers, companies and nations that are insufficiently competitive. Thus the most efficient forms of production will prevail. Although this, as an abstract principle, may be true, it only works when everyone is benefitting to one degree or another. Once the capitalist system as a whole enters into serious crisis, the people that are directly affected, mainly the individual capitalists who are unable to keep up with the most competitive companies, are unlikely to be willing to sacrifice their livelihoods for the principle of the invisible hand. The absurdity of competition is of course that although it promotes efficiency in the long run, it does so only by destroying the productive forces in the short-term, something that in any rationally planned society would be completely unnecessary. Capitalism is of course neither rational nor planned, and from a capitalist point of view, the “creative destruction” of world trade is essential.

For a whole period, the principle of free trade has been enshrined in hundreds of treaties, from bilateral, to multilateral. Trump, however, has not a small element of mercantilism in his thinking. He is pushing for trade deals that will remove trade deficits, not by raising the competitiveness of US companies (through investments) but by using US economic and military clout in order to force other nations to increase imports from the US or lower their exports to the US. They managed to accomplish this with South Korea, which signed precisely such a deal. As the Financial Times editorial points out: “This is pure bilateralism and managed trade and, as such, comprehensively in violation of the principles of the WTO.”

The EU and Canada are intent on opposing this. They do this, of course, partly out of self-interest as they already have a trade surplus that they would like to keep with the US, but it’s also part of a general attempt by the capitalist class internationally to save the world economy from disaster. They would like to salvage the institutions and treaties of free trade that have been built up over the past 70 years. In this, the EU and Canada are supported by the majority of the US ruling class, which is opposed to Trump on this point. Incidentally, Obama’s opposition to Brexit was for the very same reason.

The statement of the 6 referred to precisely this point, saying the meeting of the G7 “should be to restore collaborative partnerships to promote free, fair, predictable and mutually beneficial trade” and that “collaboration and cooperation has been put at risk by trade actions against other members”.

Trump, is characteristically full of bluster: “When you’re almost 800 Billion Dollars a year down on Trade, you can’t lose a Trade War!” He treats the world economy as a zero-sum­-game where one player’s loss is another’s gain. In reality, a trade war between the major economies would lead to huge losses on all sides. The Canadian Foreign Minister said as much when she stated that “we know that beggar-thy-neighbor policies don’t work. That was the lesson of the 1920s and the 1930s.” Indeed, protectionism turned the recession of the 1930s into a depression.

When you’re almost 800 Billion Dollars a year down on Trade, you can’t lose a Trade War! The U.S. has been ripped off by other countries for years on Trade, time to get smart!

The 6 countries are now making a complaint against the US to the World Trade Organisation, but it’s doubtful whether the US would abide by any ruling. Trump has already shown contempt for the WTO by blocking the appointment of new judges to this very same tribunal, paralysing the dispute resolution process of the organisation. For now, the main dispute is with the US, but it’s not just about the US. The question will inevitably arise why other countries should abide by the WTO if the US does not.

The US has for 70 years been the enforcer and guarantor of free trade in the capitalist part of the world. If they are no longer willing to play that role, but are also actively sabotaging the process, who is going to step into their shoes? The EU is too weak and divided, and is suffering from similar pressures in Italy and Britain. China has some credibility problems, given their trade barriers. In reality there is no country other than the US that could play this role. The main hope that the ruling class has is to limit Trump, using the US Congress and various types of retaliatory measures, directed against Trump’s supporters. Then eventually, at some point, they hope to replace him, possibly as a result of an impeachment process. What they ignore is that the same social conditions that gave rise to Trump will not guarantee the stability of the US political system. Even if they were to succeed in somehow removing Trump, there is no guarantee that they would get the kind of President they desire.

Globalisation together with the expansion of credit enabled the capitalist class to extend the post-war boom far beyond its limits. All of that is now turning into its opposite. The present crisis in world relations and the threats to free trade are part and parcel of the economic crisis. Whatever happens, the period of free trade is coming to an end, which in turn will usher in a period of deep crisis of the whole system.

This means that the dreams of many that a return to a period of prosperity is possible, will be shattered. The inability of capitalism to deliver a decent living standard for the working class will lead to one political and social crisis after another, until the system is finally overthrown. Trump is a clear expression of the impasse the system has entered.