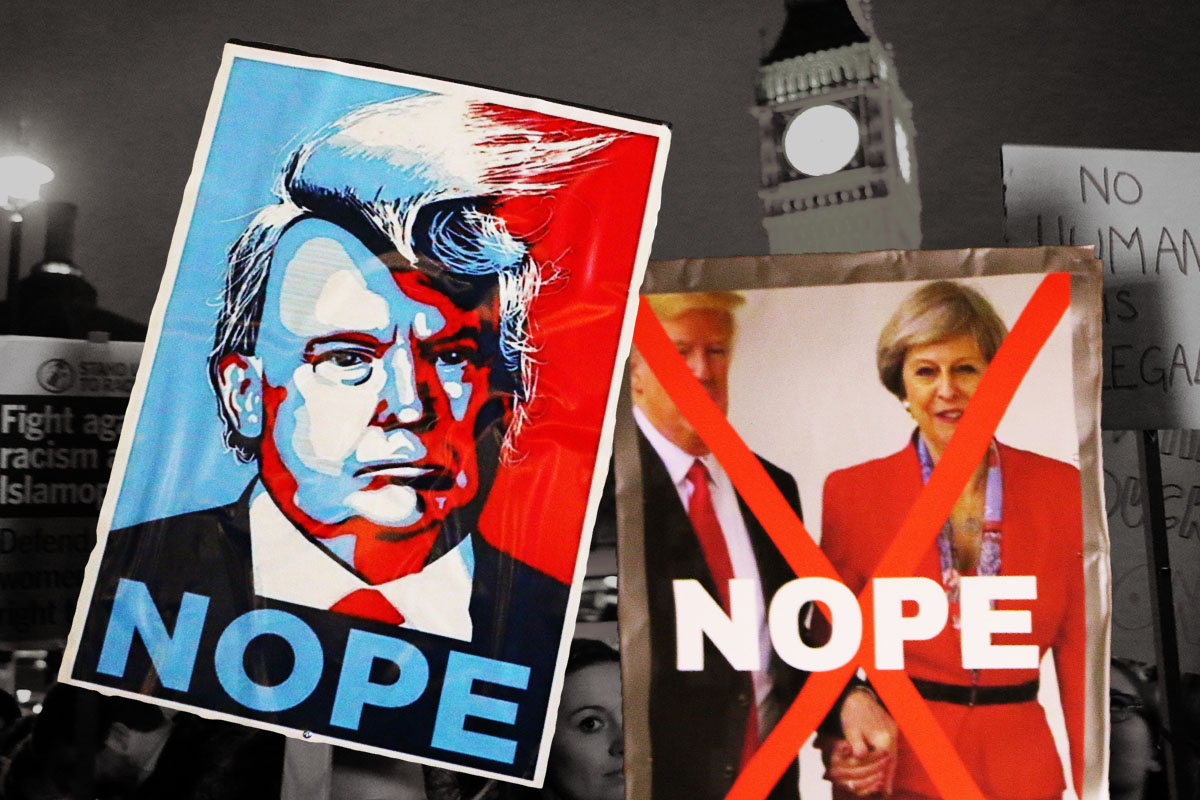 Donald Trump’s visit to Britain could not have come at a worse time for Theresa May. In the days before he landed, May was busy facing down a rebellion over her Brexit plan, with Boris Johnson and David Davis – two senior cabinet members – having resigned. Threatened with a leadership challenge if she didn’t change course, May was desperately trying to patch up the split in the Tory Party.

The last thing the Prime Minister needed was a visit from Donald Trump – public enemy no.1 – to give the pot a gigantic stir.

Thanks for having me!

Only hours after Trump had received the red-carpet treatment at Blenheim Palace, the Sun released his bombshell interview. It was perfectly timed to cause maximum embarrassment, with Trump using his platform to fire a volley of jibes at his British counterpart.

Amongst his various barbed comments, the US President criticised May’s handling of Brexit as “very unfortunate” and said that Boris Johnson (her arch-rival) “would make a great Prime Minister”.

With May’s Brexit plan (as much as she has one) already in rocky waters, Trump’s intervention was aimed at crashing the whole ship.

Adding petrol to the fire within the Tory leadership, Trump then attacked May for having ignored his advice on how to handle Brexit. “I would have done it much differently,” the Commander-in-Chief stated. “I actually told Theresa May how to do it but she didn’t agree, she didn’t listen to me.”

No doubt May was anything but grateful to Trump for sharing this insight into their “special relationship”.

May was already feeling the heat, having offered Trump a full state visit to the UK only days after his inauguration. Trump himself declined the full pomp of the state visit, knowing that his presence would be met with enormous protests. Hence his “working visit” aimed to keep him away from any public areas, to shield him from any embarrassment or disruptions.

This didn’t stop the government pulling out all the stops to massage Trump’s ego, in the vain hope that they might be able to strike a favourable post-Brexit trade deal with the USA.

Every effort was made to play to Trump’s vanity. Trump was invited to play the aristocrat, with a luxury black-tie banquet at Blenheim Palace, one of Britain’s finest stately homes. He was invited for talks with May at Chequers – the Prime Minister’s Elizabethan country retreat – where he particularly enjoyed sitting in Winston Churchill’s chair. And finally, he was flown to Windsor Castle to have tea with the Queen, where he was treated to the pomp of inspecting a military parade.

May therefore did everything possible to pretend that she held no hard feelings about Trump’s attacks on her in the Sun. When questioned about the interview at the Chequers press conference, May deflected the question to praise the “great special relationship” between the UK and the USA. So great, it seems, that when publicly attacked behind her back, she turns around meekly to say “thank you for that, we’re such great friends!”

May’s fawning over Trump is not a product of her personality, mild as it may be, but is a reflection of the decline of British capitalism over the past century. Britain and her ruling class, having allowed the “managed decline” of industry over decades, have been reduced to the status of a second-rate world power, built on the foundations of sand of a rentier economy.

Unable to throw its own weight around anymore, British imperialism has hitched itself to the USA ever since the end of the Second World War, in the same way that a weak child makes friends with the school bully. 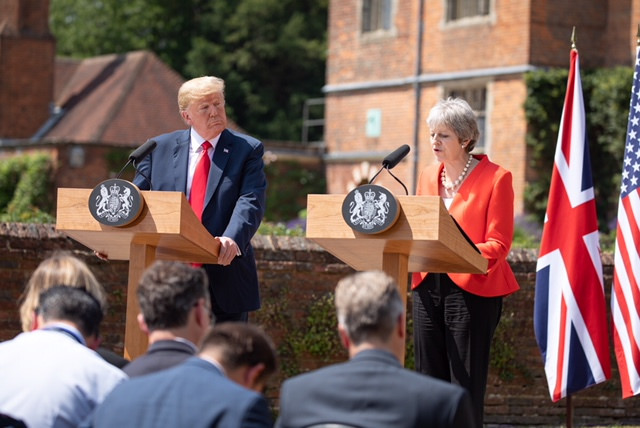 May is desperate to strike a trade deal with the States, hence her sucking up to Trump, despite his harsh words for the PM / Image fair use

This is the real meaning of the “special relationship”. The USA says jump, and the British government says “how high” – as seen with the wars in Iraq and Afghanistan.

With Brexit threatening to cast British capitalism adrift from its main export market, the UK establishment are desperate to reach a deal with anyone they can find. Furthermore, with Britain’s exit from the EU, its influence on the world stage will be reduced even further. Hence the desperate attempts of May to pull out all the stops for Trump, in the hope that the USA might come to her rescue.

Superficially it would look as if their attempts were successful. Only hours after the devastating interview in the Sun was published, Trump dismissed his attacks as “fake news”, and insisted he had used the interview to praise Theresa May.

“I didn’t criticise the prime minister, I’ve a lot of respect for the prime minister,” Trump later stated. “This incredible woman, right here, is doing a fantastic job, a great job, and I mean that. I give our relationship in terms of grade the highest level of special… Am I allowed to go higher than that?”

In front of the assembled journalists at Chequers, meanwhile, the US President attempted to reassure his audience of the admiration he has for the Prime Minister. “She’s an extremely strong and capable woman, and I would much rather have her as my friend than my enemy,” Trump asserted.

But May’s mumbled, desperate, sycophantic response of “And we are friends, Mr. President”, completely ignored by Trump, only served to underline how little he cares for the opinion of Britain’s premier.

On Brexit, Trump said: “whatever you do is OK with me, that’s your decision… just make sure you can trade with us, that’s all that matters.”

Any potential interest Trump might have in a hard Brexit has nothing at all to do with the national sovereignty of the British people, but in further weakening the EU in general, and Germany in particular. 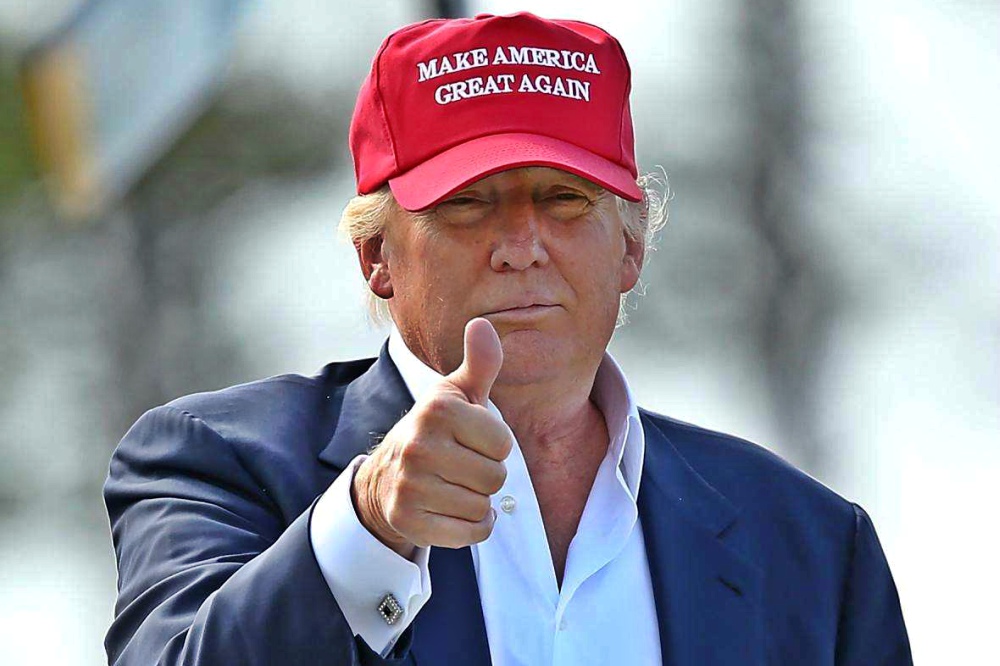 Any interest Trump might have in a hard Brexit concerns weakening the EU in general, and Germany in particular / Image: fair use

In doing so, he has his eyes on securing a trade deal with Britain, to the benefit of the USA. All of this is simply the product of his “America First” policy – i.e. to rebalance global trade in favour of the USA, to the detriment of everywhere else.

Despite Trump’s conciliatory remarks, Trump’s earlier intervention on Brexit was clearly designed to further destabilise May’s position within the Tory Party, and to tip the scales in favour of a hard Brexit. In doing so, the US President will have emboldened the hard Brexiteers to proceed with their campaign, further deepening the cracks within the Tory Party as a whole.

On the other hand, it is likely to also embolden May in seeking a compromise position with the EU (i.e. Brexit in Name Only), as it is clear she cannot rely on Trump as an ally to bail out British capitalism.

Such a situation means a governmental crisis in Britain is inevitable, even to the point of a full-scale split in the Tory Party. The only question is when it will fully reach the surface.

The reality of the “highest level of special relationship” is that Trump was merely stopping off in the UK as part of his wider European tour.

The President started in Brussels, where he lambasted the representatives of NATO for not spending enough on “defence”, in what was described by the Financial Times as “the most divisive summit in the 69-year history of the alliance”.

During this same NATO summit, Trump also derided Angela Merkel over her immigration policy and for doing an energy deal with Russia.

After then embarrassing Theresa May in Britain, and watching the World Cup final in Moscow, Trump flew to Helsinki to meet Vladimir Putin. After a brief private meeting, Trump declared that he thought he and Putin would have an “extraordinary relationship”, laying bare the reality of relations between Trump, Britain, and America’s other traditional ‘allies’.

Presumably for Trump, the difference between “extraordinary” and “the highest level of special” is that whilst Trump seeks to put America First in all cases, the one with Theresa May is unequalled for its degree of subservience and flattery.

For the working class in Britain, so special is Trump and May’s relationship, that hundreds of thousands took to the streets in London and elsewhere to protest his visit.

Of course the establishment media did everything they could to downplay the turnout, with the TV news showing images of the demonstration dispersing at the end, and reporting only “tens of thousands” in attendance.

The protests showed clearly the weakness of the Tory government, on one side, and the strength of workers and youth when mobilised, on the other. It is unprecedented for the President of the USA to be forced to avoid visiting London entirely, for fear of a backlash. 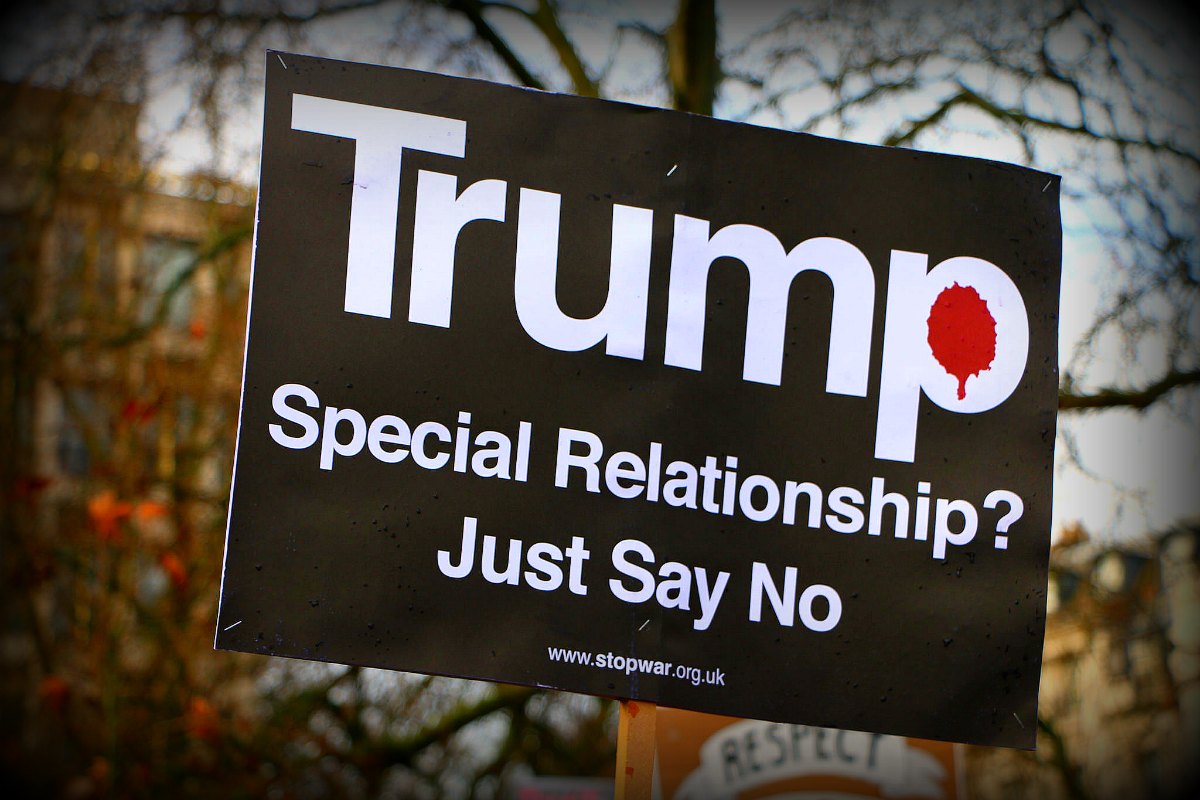 What is needed is for the labour movement to put an end to the rotten capitalist system that breeds reactionary figures such as Trump and May / Image: Socialist Appeal

At the end-of-protest rally, however, the leaders of the demonstration offered no programme of action beyond simply turning out to shout anti-Trump slogans.

What is needed is for the labour movement to offer a bold socialist alternative to the cruel, divisive, brutal policies of May, Trump, and their ilk. This means putting forward a programme to change society; to put an end to the rotten capitalist system that breeds reactionary figures such as both Trump and May.

Such a strategy could channel the energy witnessed on Friday’s demonstration into a movement capable of bringing down the Tories and putting a socialist Labour government in power. Only then can we end the “special relationship” between American and British imperialism – and all the war, exploitation, and misery that it brings – once and for all.