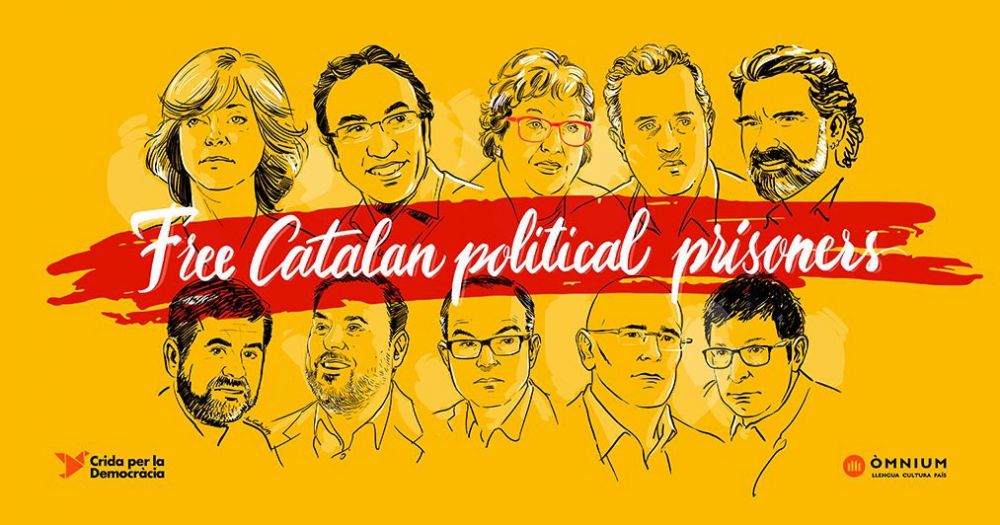 The Spanish regime twists its own bourgeois legality

The 12 elected politicians and mass movement leaders in the dock have spent the last year and a half in preventive detention: a totally disproportionate measure that shows the vengeful and repressive nature of the Spanish state apparatus. The threat of "breaking up" Spain posed by the mass movement in Catalonia enraged the right wing and the state apparatus, which in its eagerness to punish the leaders has bent the (limited) framework of its own bourgeois legality.

In November 2017, article 155 of the Spanish constitution was applied to suspend Catalonia’s self-government by imposing direct rule from the Spanish Government. Then-President Rajoy called fresh Catalan elections in the hope of breaking the dominance of the independence parties. However, the independence parties revalidated their mandate, humiliating the regime, while greatly complicating the decapitation of the Catalan republican struggle. Although Ciudadanos was the party that received the most votes, Puigdemont enjoyed the democratic mandate of a majority in the new Catalan Parliament to be re-elected as president. The supreme court and the constitutional court, however, prohibited the Catalan Parliament from electing its president, demanding someone that hadn’t been involved in the events of October 2017. Finally, after three failed attempts to appoint a president, Quim Torra, a little-known politician, was voted in to lead the Catalan Generalitat. The Spanish regime showed in practice that bourgeois democracy, and its legality, are mere instruments in their hands that they decide to use or throw away to safeguard their interests.

The accusation of rebellion, which is the main crime being tried, hasn’t enjoyed much prominence so far. The little attention it has received has been mostly based around the Civil Guard cars that were damaged during the 20 September 2017 protest, when 40,000 people spontaneously surrounded the Ministry of Finance in Barcelona to reject the detention of several leaders of the independence movement. The reason? Because it is totally scandalous and false that the Catalan leaders can be tried for an armed uprising, which is the definition of rebellion in the Spanish penal code. Firstly, the leaders of the movement did not at any time make an appeal to an armed insurrection, they did not organise the taking of strategic points (such as communications, transport, geographical points, etc.), barracks were not assaulted, etc. The Spanish state did not react with a declaration of a state of siege as would be expected from a challenge of such magnitude. The indictment for rebellion is so untenable that the Spanish prosecutor's office failed to get Catalan president Puigdemont extradited from Germany on these grounds, not even with the help of the German prosecutor.

Moreover, the accusation is so spurious that it has been questioned by more than 200 professors of criminal law, and even by Pascual Sala, who was president of the supreme and constitutional courts. With this, as La Vanguardia (Spanish newspaper) explains, the prosecution will need the help of the majority of its 256 witnesses to justify the “violence” necessary for the crime of rebellion. These witnesses have been selected with care, and others, such as the Síndic de Greuges, a Catalan institution that is in charge of guaranteeing the rights of citizens before public administrations and that would provide information and objective data to the trial, were rejected because they would not conform to the state’s version of reality. Justice, and through it, the ruling class, moves and adjusts legal frameworks to guarantee the maintenance of their interests.

The trials and the class character of the justice system

Since the start of the economic crisis in 2008, we have experienced a process of political polarisation on a world scale. In these unstable conditions, with abrupt changes in the situation, the legitimacy of bourgeois institutions has been worn down in the eyes of the masses. This is the case especially in Spain and in particular with the justice system, and its veneer of "independence", which has been revealed as a farce. Its unequivocal class character is now increasingly clear to a growing layer of the population.

Judge Marchena, who presides over the supreme court, judging the Catalan leaders, had been put forward as a candidate to preside over the General Council of the Judiciary, the constitutional body that governs all the judiciary bodies of Spain. He was compromised by the stupidity of the Popular Party when a Whatsapp was leaked saying that with him the PP would be able to control the judiciary "through the back door". This reactionary judge close to the Popular Party finally had to renounce his candidacy and merely content himself with presiding over the most important trial in the recent history of the country. 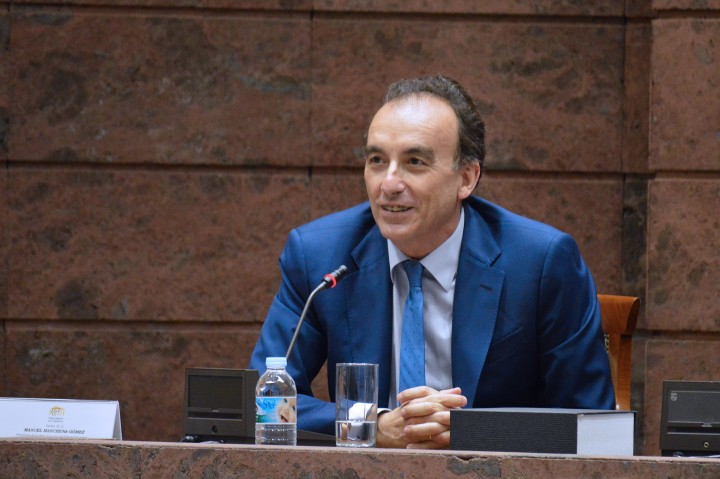 The Spanish regime shows in practice that bourgeois democracy and the justice system are mere instruments to safeguard their interests / Image: Flickr, Parlamento de Canarias

Perhaps the most notable scandal so far has been the one surrounding the Tax on Documented Legal Acts (AJD). The supreme court ruled that banks should pay this tax, which is paid when legally entering into a mortgage agreement. Up until then the tax had been paid by customers. In an unprecedented case, the Supreme Court made a 180 degree turn on its previous sentence in less than a week to rule in favour of the banks and against the customers. Unsurprisingly, the stock market shot up when the news was made public.

These examples should not surprise us. Most of the judges are individuals who come from the upper echelons of society or from the wealthy petty-bourgeoisie; who have links with the state and/or big businesses. Their education, their way of thinking, their way of acting is the same as that of the Spanish ruling class, although they try to conceal this behind their judge's robes and twisted language. This is what ultimately marks the class character of the judicial institution, beyond the sporadic exceptions of an honest judge, where sentences are given in favour of the people, etc. Ultimately, the justice system is another organ of oppression in the hands of the ruling class, as are the prisons, the army, the police – in short, the state itself.

Cleansing of the justice system and the struggle against capitalism

The outcome of this farcical trial has been decided in advance. We cannot know exactly what the sentences will ultimately be, but what we do know is that the Catalan leaders are going to be punished in one way or another for having challenged the unity of Spain and consequently the interests of the ruling class. The three, right-wing parties (PP, Cs and Vox) have been emboldened by the lack of any real opposition from the left, stirring rancid Spanish nationalism with incendiary statements, and demanding scalps. The state apparatus, in charge of bringing order to the situation, will also claim its part. 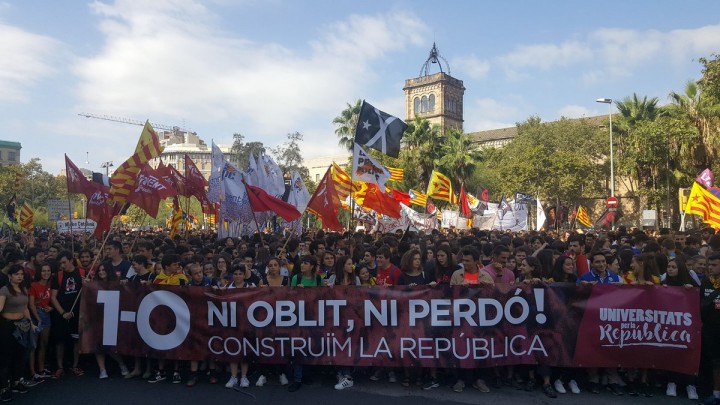 Any serious democrat has a duty to oppose any attack on democratic rights and to defend the right to self-determination / Image: public domain

This farce trial shows the need for a purging and radical transformation of the Spanish judiciary. Judges and prosecutors should be chosen by universal suffrage, being recallable at any time by those who elected them. This measure would make it possible to choose more progressive judges and prosecutors who are responsive to the interests of the working class: the class that constitutes the majority of the country's population. Likewise, as public officials, judges and prosecutors should not enjoy any privilege, but should have the same rights and obligations as any average official, with salaries adjusted to the corresponding level. These measures, of limited character, should be linked to a general cleansing of the state apparatus of francoists and reactionaries, who have raised their heads with the Catalan crisis, showing the fraud of the "democratic transition" that occurred in 1978 from a dictatorship to democracy.

The authoritarian drift of the Spanish regime is a reflection of the polarisation of society, which seeks an exit from the deep crisis of the system. The class rule of the Spanish bourgeoisie and its lackeys rests on a narrow social base, and reinforced by bureaucratic centralisation and oppression. On these rather unstable bases, the regime has to employ repression with a firm hand when its interests are threatened. The cuts to democratic rights were accelerated by the gag law introduced in 2015 and have experienced a new impulse in the wake of the Catalan crisis. We see how the repression has spread not only to the Catalan politicians now on trial, but also to activists, union leaders, artists, etc. Any serious democrat has a duty to oppose any attack on democratic rights and to defend the right to self-determination. Mass mobilisations against political trials and in favour of absolution and the right to self-determination should be promoted throughout the Spanish state, linking these struggles with the fight for social gains. In the current crisis of the system, and with a global economic crisis on the horizon, in order to defend minimal democratic rights, we must fight not only against the regime, but against the bankers and big businessmen who support it.

A balance-sheet of the Catalan October