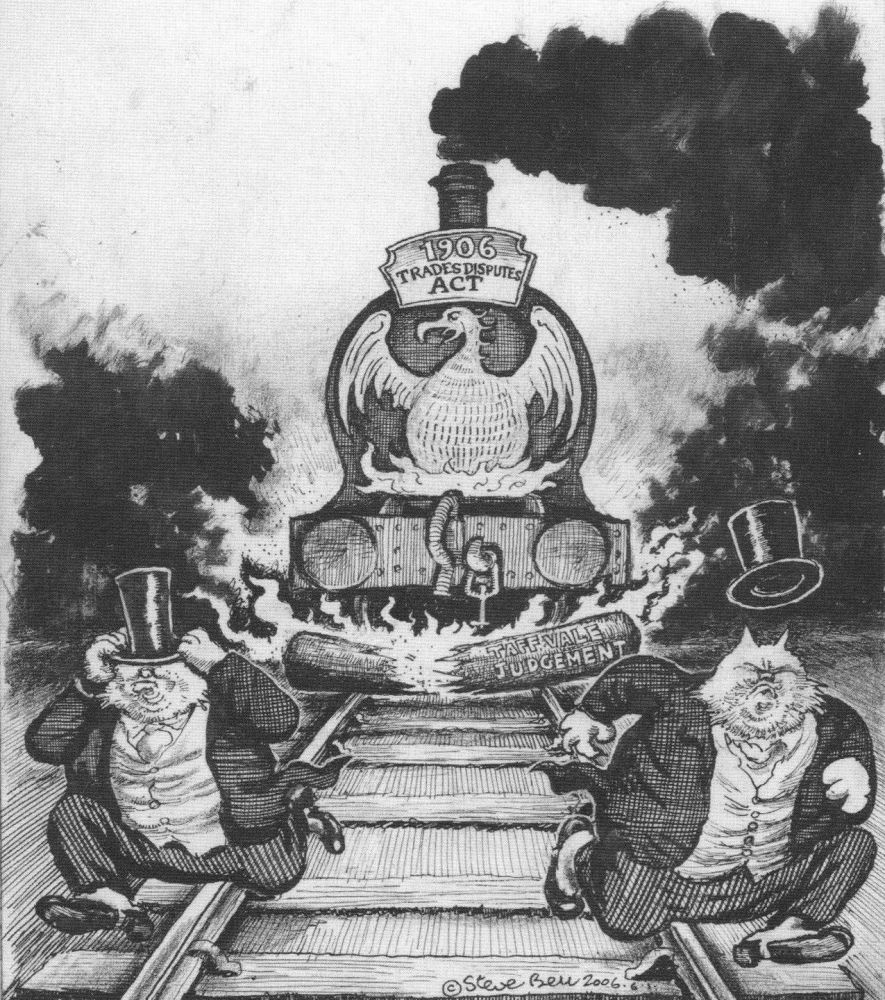 This year marks the centenary of the Trades Dispute Act of 1906, the election of the first 29 Labour MPs and the formation of the Labour Party from the Labour Representation Committee.

It is significant that these centenaries illustrate the links between the Labour Party and the trade union movement because the Trades Disputes Act gave trades unions immunity from being sued for damages by employers during a trades dispute [or strike in today's language].

In 1901 the Taff Vale Company sued the Amalgamated Society of Railway Servants for damages incurred during an otherwise successful trades' dispute. The House of Lords upheld this decision and the union was ordered to pay £23,000 in damages (£3-4 million in today's money). This prosecution followed a decade of attacks on trade union rights. The unions of unskilled workers formed in the 1880s had suffered loss of membership due to unemployment. Employers had recruited the unemployed, including criminal gangs to break strikes, and a whole series of court decisions deprived the unions of the right to a closed shop and the right to refuse to deal with non-union firms.

The Tory Press launched a tirade against the unions, calling them "our national mafia" and called upon the state to protect the public from "working class tyranny".

The Taff Vale case had an immediate impact on the newly formed Labour Representation Committee, later to become the Labour Party. It was essential for the unions that legislation be put through Parliament to reverse this judgement and guarantee unions immunity during an industrial dispute. Support for the LRC grew. In 1900 when it was set up, less than half the TUC had affiliated. But now important unions like the Miners' Federation saw the implications of Taff Vale for themselves and switched from supporting the Liberals to Labour. Within two years the affiliated membership of the LRC had doubled from 455,450 to 861,200. By 1906 when it changed its name to the Labour Party it was over 900,000 strong and returned 20 MPs to Westminster. The behaviour of one employer had been enough to cement the links between Labour and the unions.

In 1906, 29 Labour MPs were elected. Many of them had links with the trade union movement, having been officers in their unions. These MPs were in a position to exercise pressure on the Liberal Government to pass the Trades Disputes Act in 1906.

This Act, as well as giving trade unions immunity during an industrial dispute, also legalised secondary picketing. One trade union could take solidarity action in support of another. This landmark decision reflecting the growing strength of the labour movement was not to be reversed until after the defeat of the General Strike of 1926, when secondary action was again outlawed by a Conservative Government. This right was re-introduced by the 1945 Labour Government. After the successful solidarity action of the 1970s it was banned again as part of the anti-trade union legislation introduced by the Thatcher government. This time however it has not been repealed after nine years of Labour Government under Tony Blair. Secondary or solidarity action by trade unions remains illegal. Britain still has some of the most anti-trade union legislation in Europe. The Liberal Government of 1906 was prepared to legalise secondary action but not the present Labour Government. Trade union rights were better in 1906 than they are today!

The years of the 1906-1914 Liberal Government saw increasing industrial militancy with disputes in all the major industries such as mining, the docks and the railways. A Triple Alliance was forged between the unions of the three main industries. Amalgamation committees were set up at grassroots level and the number of trade unionists increased. Trade union activists were being pulled towards revolutionary ideas such as workers' control and syndicalism. Suffragettes and Irish nationalists also took direct action to achieve their aims. These were the years which saw the strange death of "Liberal England."

There were also changes within the Labour Party itself. The Party became more representative of the trade union movement and of the working class as a whole. The growth of trade union affiliation to the Labour Party was accompanied by a rebellion against pacts with other political parties, such as the Liberals. In 1906 many seats had not been contested by Labour because of an electoral pact with the Liberals. Even though this was a reforming Liberal government which initiated the welfare state and introduced an eight-hour day for the miners, many Labour candidates did not receive support from the Party. This was challenged and in 1907 the Conference called for control of the Parliamentary Labour Party by the annual conference. Trade unionists were also seeing the limits of parliamentary action. Outside of Parliament the mine-owners were implementing cuts in real wages. As with future Labour Governments looking to Labour MPs in Parliament to deliver became superseded by an upsurge in industrial militancy. This also happened during the Labour Government of 1974-79, when after years of loyalty to the "Social Contract", finally low paid public sector workers took industrial action in the so-called "winter of discontent". Similarly in 1997 the Blair government was seen as a welcome release from years of the Tories. Now, that situation has changed with industrial disputes taking place and trade union leaders critical of the government; perhaps more sharply now than under any other previous Labour Government.

In 1900 the aims of the LRC were independent labour representation in Parliament - a clear commitment to class politics. Now the Party was to move in a more clearly socialist direction. Marxists from the small Social Democratic Federation who had despaired of Labour ever having a socialist programme were to be confounded in 1908 when the following resolution was passed:

"..that in the opinion of this Conference, the time has arrived when the Labour Party should have as a definite object, the socialisation of the means of production, distribution and exchange, to be controlled by a democratic state in the interests of the entire community, and the complete emancipation of labour from the domination of capitalism, and landlordism, with the establishment of social and economic equality between the sexes."

This was carried by 514,000 to 469,000 votes. The mover of the resolution spoke from his experiences as an engineer and trade unionist. The aspirations of his union he said had not been realised after 50 years. There was unemployment in the engineering community and a standard of living far short of what our forefathers had expected. This could only be due to "private ownership" of the means of life. His union rule book upheld the principle that every man should be able to enjoy the full fruits of his labour. This resolution pre-dated the adoption of Clause 4, Part 4 of the constitution committing the Labour Party to public ownership in 1919.

In 1909 another attack on the labour movement was launched in the form of the Osborne Judgement. This was a ruling upheld by the House of Lords that the unions could not use their funds to finance political causes. This meant that they could no longer fund Labour MPs. MPs in those days did not receive payment. The Judgement was reversed by the Trades Union Act of 1913. But the funding of Labour by the unions was to come under attack again after the defeat of the General Strike of 1926. Legislation in 1927 made trade unionists "contract in" rather than "contract out" of paying a political levy to Labour.

The ruling class in Britain have been eager to break the links between Labour and the unions. They cannot tolerate the second main political party being in the pay of the trade union movement. This has clearly marked Labour as being a class-based party. The Tories of course obtain millions of pounds from big business, including sources from abroad. The establishment would like to see a safe second party of capitalism, like the Democrats in the United States. In this, they had an ally in Tony Blair.

But the Blair agenda and New Labour have failed to break the links between the Labour Party and the trade union movement. Attempts to raise alternative sources of funding from rich backers have backfired as the Party's source of funding has been called into question and the spectre of sleaze familiar in the Tory years had re-emerged. With little enthusiasm from the electorate for state funding for political parties it is back to traditional - that is trade union ‑ sources of funding for Labour. Again the unions will have to bail Labour out in a time of financial crisis. The Blair experiment has come to an end.

Unfortunately the policies of the government have done considerable harm to the Party with the individual membership literally halved since 1997. Unfortunately some trade unions have disaffiliated. Sadly today's successor to the Society of Railway Servants sued by the Taff Vale Company in 1901 - the RMT - has gone down that path. But the Labour Party has not been replaced by any alternative as the main party of the working class in Britain. Now is the time to reclaim it, not leave it. The days of Blairism are numbered.