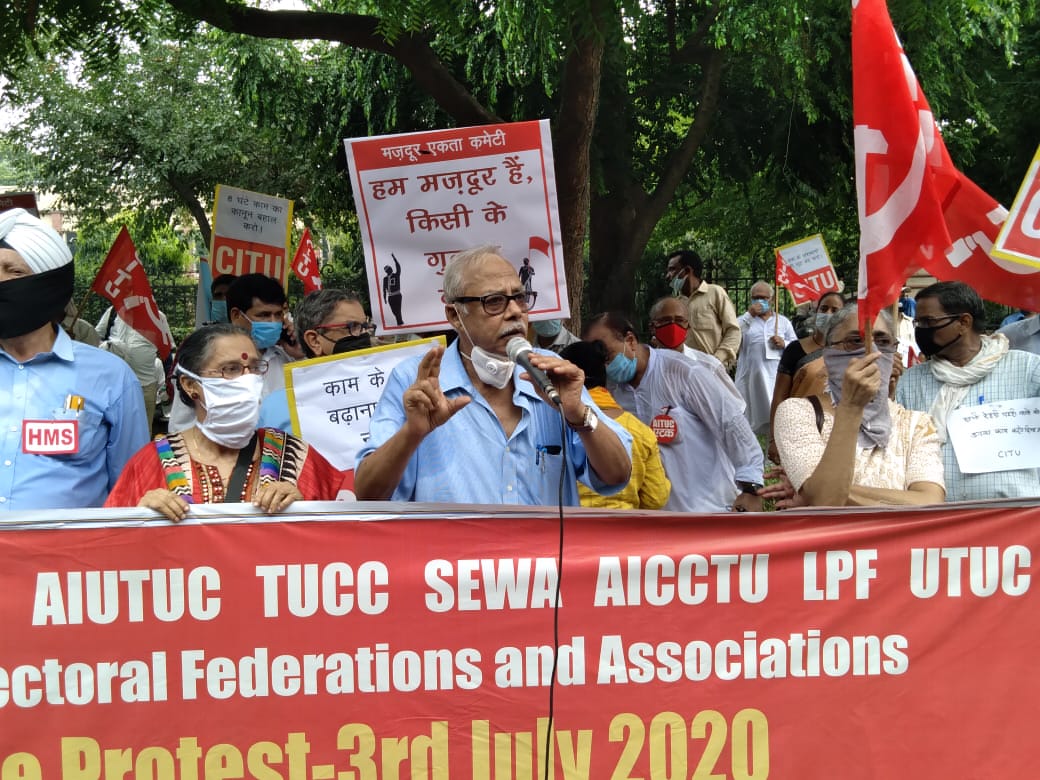 The Central Trade Unions (CTUs), comprising 16 unions, called for protests all over India on 3 July, which took place throughout the country. Nearly 100,000 demonstrations occurred in all the states of India including Puducherry, Uttar Pradesh, Punjab, Odisha and Maharashtra. In these demonstrations, protestors agitated outside their union offices, in plants, and on streets and roads. This strike was accompanied by a coal workers’ strike against privatisation, lasting three days from 2-4 July.

The 3 July protest was held against the anti-worker policies of the right-wing Modi Government. The trade unions have demanded:

None of these demands, nor those in the unions’ 12-point charter, were met; and therefore they went on strike.

The right-wing Modi government has taken the opportunity of this lockdown situation to implement anti-worker legislation. The BJP-led governments in Uttar Pradesh, Madhya Pradesh, Rajasthan and Punjab have suspended labour laws like the Industrial Dispute Act, the Trade Union Act and others. The Gujarat government has extended the working day from 8 to 12 hours. The Modi government has also introduced a bill reducing 44 labour protection laws to four.

A statement by the CTUs said that, throughout the protests, they have:

“[R]eiterated their opposition to disinvestment and wholesale privatisation of Public Sector Enterprises, 100 percent FDI in core sectors – Indian railways, Defence, Port and Dock, Coal, Air India, Banks, Insurance, Aerospace & Atomic Energy etc. – in addition to measures that favour the Corporates of Indian & Foreign companies who seek to usurp the natural resources and business of the country while parroting the slogan of Atmanirbhar Bharat [self-reliant India]. The freeze on DA [Dearness Allowance, paid by the government to workers to offset inflation] to 480,000 Central Government Employees and DR [Dearness Relief, paid to elderly people for the same purpose] to 680,000 pensioners, which is also having impact on the state government employees, has not been withdrawn despite vehement opposition from Government employees and CTUs. Neither was the demand of a cash transfer of Rs.7500 to all non-income tax paying persons accepted.” 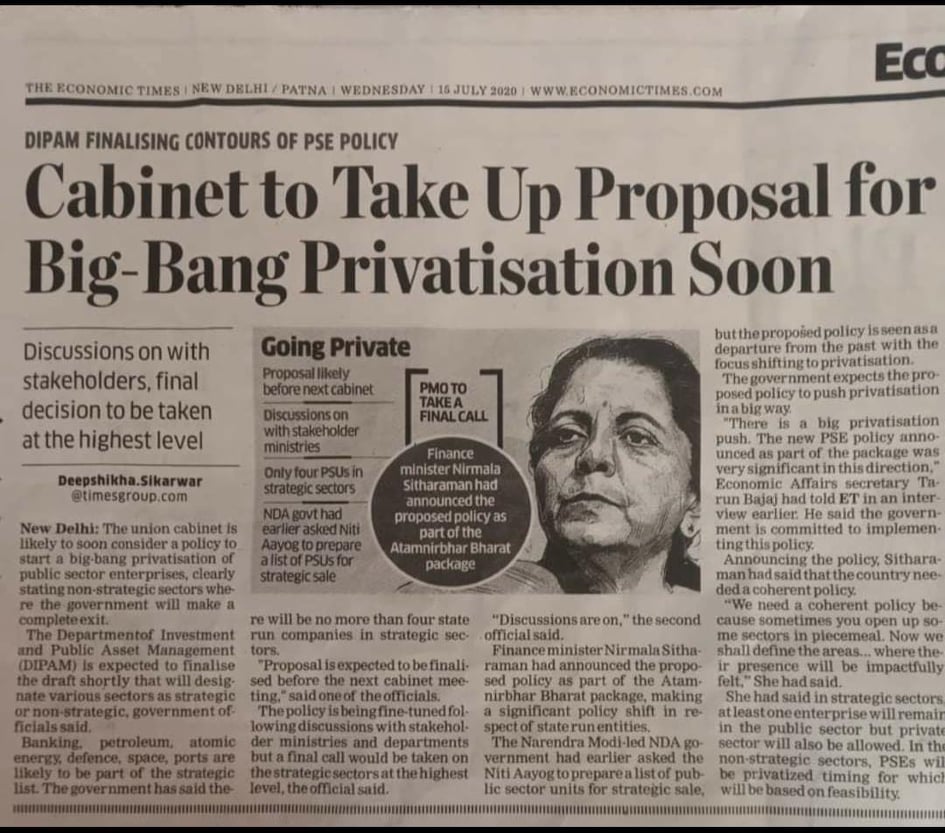 The Indian railway network is the fourth-largest in the world, with a route length of 67,415 km; and it has some 1.23 million employees. The railways are the most-used form of transport by Indian people. They are owned by the government, which has now decided to put 150 private trains on 109 routes, and will also give private companies the right to decide the fares for 35 years. This policy of privatisation will seriously affect the revenue of the railways and it will also lead to job losses and precarious work. The bidders for the railways routes are the Essel Group, Macquire Group, Bombardier Group and Adani Ports. This policy will only enrich the corporate coffers.

BSNL is a government-owned Telecommunication Company in India. The government has not so far implemented the Rs. 680,000,000,000 revival package it has promised. Nearly 79,000 workers were laid off through voluntary retirement and those who remain have not been paid wages during the period of lockdown. BSNL workers were protesting even before the COVID-19 pandemic due to the non-payment of wages. The profitable, government-owned company has been facing huge losses because of the government’s support for private enterprises like JIO, owned by the Reliance group of Ambani. The BSNL has not yet got rights to sell 4G services and its efforts to get 4G services have been hindered by the Modi regime, which favour the other, private telecoms companies.

Coal workers are on strike due to the failure of talks between trade union leaders and the Minister of Coal over the privatisation of Coal India Limited. The Modi government has decided to allow commercial mining of 41 coal blocks, mainly in the states of Maharashtra, Madhya Pradesh, Chattisgarh, Jharkhand and Odisha. On 2 July, Modi launched the auction of coal mines and the workers went on a three-day strike from 2-4 July. The reports from trade union leaders confirm that there has been a 100 percent participation in the strike. Nearly 530,000 coal workers participated in the protests. Coal India Limited has said that there was a loss of production of 4 million tonnes due to the three-day strike. Overall, despite outsourcing workers and the use of police by the company, the strike was successful. The workers are planning for future action in coming weeks and months against these brutal privatisation attacks by the Modi regime.

The All-India Kisan Sangharsh Committee (an Umbrella organisation of 130 peasant organisations across India) also joined the protest and expressed solidarity with the strike. Peasants and Adivasi (tribal people) are also protesting the privatisation of the Modi regime in the agricultural sector and the privatisation of the coal sector, which would affect the Adivasi peasants, who largely inhabit these areas.

There has been widespread anger against the privatising and pro-corporate policies of the Modi regime. There are huge job losses and wage cuts, and the government has also withdrawn its own orders (through the home ministry) of asking private companies to provide wages to all workers during the lockdown period. Even before the lockdown, the economy was in shambles, with an unemployment rate of 7.4 percent: the highest in five decades. The unprecedented lockdown on 24 March, within a four-hour notice period, imposed on a population of 1,300 million, was a nightmare in itself; and now its consequences have thrown millions of workers into further unemployment and poverty. 140 million workers are already facing unemployment, and if day labourers are included, it extends to almost 240 million left jobless. Many small-to-medium-scale industries have been closed. Due to the lockdown, the economy ground to a halt, and the ILO estimates that 400 million Indian workers will be pushed into destitution.

The conditions of migrant workers also show the grim reality of the working class of India. Already extremely exploited through the extraction of surplus labour, lockdown has led to further misery. Migrant workers had to walk thousands of kilometers in some cases to reach home due to a lack of transport when the lockdown was announced. Nearly 30 percent of those who died during lockdown not as a result of COVID-19 were workers suffering accidents while walking home, police brutality and starvation.

Rather than addressing the urgent needs of these millions of workers, the Modi government is focusing on crushing any kind of dissent against it, and is arresting student and labour activists during this period. The student leaders who organised and participated in the protests against the draconian citizenship law earlier this year are now being arrested across the country and charged under similarly draconian laws. Meanwhile, BJP leaders like Anurag Thakur and Kapil Mishra, who were the perpetrators and instigators of violence against Muslims and anti-CAA protesters in February, are let off scot-free.

The Modi government is amassing more state power during this lockdown by amending labour laws, criminal laws and disability rights; and also amending the electricity act by making it more pro-corporate and anti-working class. The anti-worker policies of the Modi regime and his handling of migrant workers have led to huge changes in the class consciousness amidst the Indian working class. There was a huge general strike in January 2020, in which 250 million participated. There is every possibility that, in the coming period, we could see similar general strikes at a much higher level and with even more vigor.