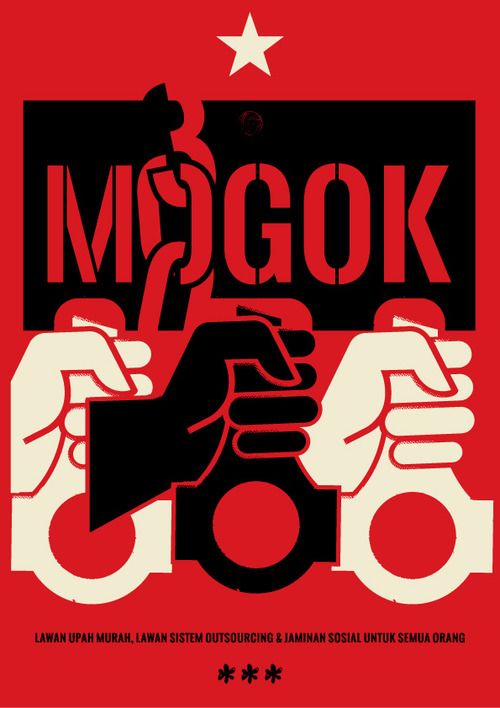 While the workers have become bolder and more confident at the mention of the date, the capitalists have become more and more nervous and agitated upon hearing it. They have lashed out incoherently against the demands of the workers and the idea of general strike.

In the month leading up to the planned general strike, workers all over Indonesia have been mobilizing for what they call “warm-up” mass actions. Demonstrations, small-scale strikes, and vergadering (mass gatherings) involving hundreds of thousands of workers, became an almost daily occurrence. 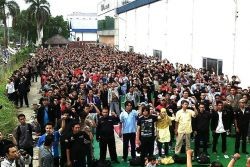 For instance, last Thursday (24/10), thousands of workers blocked the main road in Java Island (Pantura Semarang-Demak) and caused a 15-km-long traffic jam. On Tuesday (22/10), thousands of workers from state-owned enterprises gathered in front of the legislative building to press for the abolition of contract workers in state owned enterprises. The day before (21/10), 20,000 workers, peasants, and fishermen packed the main stadium in Jakarta in a “National Dialogue” event organized by the KSPI (Indonesian Trade Union Confederation), the main union that called the general strike. National leaders were invited to speak before the workers in the stadium, while many others were demonstrating not far from the event. In Central Java, last Thursday (24/10) thousands of workers from the SPN (National Workers’ Union) blocked the main artery in Semarang and surrounded the governor’s office for hours demanding wage increases. Also on the same day, thousands of GSBI workers in Sukabumi, West Java, took part in a long march and later gathered in the main square to demand wage increases. This was the situation everywhere. The mood of the workers is very clear. They are ready to bring the fight to the bosses and the government. 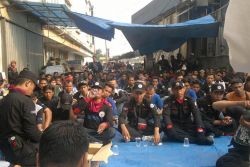 In this general strike, the workers have five main demands: 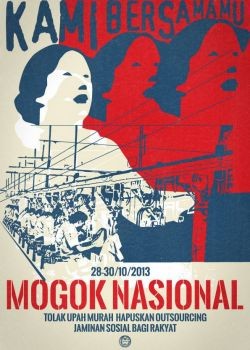 In the past two years, millions of workers have been trained and steeled in the heat of the class struggle. Beginning from a very weak position with very little organisation or proper leadership, the Indonesian working class is becoming more confident with each step it takes. The workers are entering what is seen as unchartered waters and although they meet resistance they are emboldened by each success. In an attempt to address their weaknesses and educate themselves politically the workers have organised political classes in many areas. This also shows the enormous thirst for revolutionary ideas. This is fertile ground for the development of a Marxist tendency.

As class divisions become sharper in society, so is the division between the reformist elements and radical elements within the workers’ movement. In fact, they always develop hand in hand. As rank-and-file workers become bolder and more radical, a section of the union leadership which is more conservative is moving heaven and earth to put a brake on the movement. Clashes between these two elements have begun to emerge. One expression of this is the de facto split in the MPBI (Council of Indonesians Workers and Labourers).

Formed on May 1st 2012, the MPBI united a number of mass workers’ trade union confederations and federations. They were the ones who called the general strike last year. This year some unions within the MPBI, namely the KSPSI and KSBSI, have refused to join the general strike. This left only the KSPI (Confederation of Indonesian Workers’ Unions) as one of the major forces from the MPBI – and other unions outside the MPBI such as SEKBER, KSN, etc. – to mobilize for the general strike. This is a clear attempt to divide the working class and weaken the strike, but considering the rising level of militancy and the successful campaigns organised by the workers over the past two years, this might be a big miscalculation on the part of the reformist leaders. In fact, some local unions are defying their leadership’s instruction not to strike. Metalworkers from the KSPSI, whose leadership has refused to join the general strike, have decided that they will join their brothers and sisters in this historic event.

Many of the trade unions that have a more radical tradition, the so-called “red unions”, are also joining this general strike call. This is different from last year’s general strike when many ‘red’ unions were hesitant in joining a general strike which had been called by reformist trade unions such as the KSPI, and only mobilized their forces at the last minute. Their lack of experience and knowledge in responding to reformist mass workers’ organizations and the old habits of small circles made them blind to the fact that there are millions of workers who were moving for the first time into the political arena. As revolutionaries it is our task to enter the struggle with these layers and through this to win them over to revolutionary ideas.

Learning from their mistakes of the past, many red trade unions are now joining this general strike, mobilizing their members, and conducting revolutionary agitation and propaganda amongst the wider mass of workers. However, the leadership of KASBI (Congress of Indonesian Unions Alliance), the largest of the red unions in Indonesia, have not called on their members to join the general strike. They are still trapped in a sectarian mindset, and thus separate themselves from the millions of workers who are on the move. As the most class conscious elements in the working class, they are doing a disservice to the class struggle by not challenging directly the reformist leadership that still holds in its sway of millions of workers.

While the Indonesian workers are preparing for their general strike, in Spain over a million teachers, students, and parents went on strike against cuts in education. Tens of thousands marched in Portugal to show their defiance against the proposed 2014 budget that includes a set of severe austerity measures. In Brazil, the June Days protests still continue with strikes and mobilizations of workers. Everywhere around the world, the class struggle is intensifying. It may suffer defeats and setbacks, but the general line of the march is towards a sharpening of the class struggle. The general strike in Indonesia is part of this worldwide process.

How the general strike on Oct 31st unfolds remains to be seen, but the process toward the general strike is already a gain in and of itself. We are entering a historical juncture in the development of class consciousness amongst the wider masses of workers in Indonesia. The workers are reclaiming their tradition of class struggle, and this will open the door toward Marxism for them. The soil is fertile for the growth of Marxism, and what is required is to build a revolutionary Marxist tendency with steeled cadres who can commit to the task of spreading Marxist ideas amongst these radicalized workers.