Share
Tweet
Martin Wolf in the Financial Times today: “…this would be a recipe… for xenophobia, nationalism and revolution… Everything must be done to prevent the inescapable recession from turning into something worse… Deflation is a real danger… At stake could be the legitimacy of the open market economy itself… the danger remains huge and time is short.” 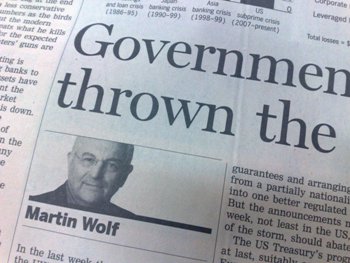 We are facing the worst economic crisis since the 1930s. Despite all the efforts to bail out the banking system, the economic crisis has only just started to bite. How deep or long the crisis will last is difficult to estimate, but given the financial house of cards built up in the last world boom, the capitalist system has entered unprecedented times, in which a depression cannot be ruled out.

Even the strategists of capital are terrified of this scenario, with all the mass unemployment and misery that goes with it.

“Many reach for parallels with the ‘gilded age’ of the 1920s, that gave rise to unprecedented Great Gatsby-style incomes at the top and was brought to a close by the 1929 stock market crash and the ensuing Great Depression”, comments the Financial Times (29/10/09). Interestingly enough, the distribution of US income today almost exactly matches that of 1928 on the eve of the Wall Street crash. In 1928, the top 1 per cent of Americans took in 24 per cent of national income, compared with 23 per cent today.

The artificial boom is giving way to a great downturn. The gloom surrounding the capitalist class is mirrored by their spokespeople. Martin Wolf, the key economic writer for the FT ably expresses the panic and dread of the capitalists. On 20 February, he wrote in his column: “America’s economy risks the mother of all meltdowns”.

In today’s FT, Martin Wolf points to the global outlook from JP Morgan Chase, which was forced to revise down its previous bullish predictions. In their assessment entitled “A bad week in hell”, the bank expects a shrinkage this quarter at an annualised rate of 4 per cent in the US, 3 per cent in the UK and 2 per cent in the euro-zone. However, Wolf qualifies this assessment:

“Given the near-disintegration of the western world’s banking system, the flight to safe assets, the tightening of credit to the real economy, collapsing equity prices, turmoil on currency markets, continued steep declines in house prices, rapid withdrawal of funds from hedge funds and ongoing collapses of the so-called ‘shadow banking system’, these forecasts even look quite optimistic. The outcome next year could be far worse.”

Despite the guarantees to recapitalise the banking system, the evidence is this has not halted the turmoil. While the capitalisation of world stock markets have halved, the losses on worthless debts have grown to a massive $2,800bn.

He points to those who believe a short, sharp recession would fix things saying, “The idea that a quick recession would purge the world of past excesses is ludicrous.” He goes on, “The danger is, instead, of a slump, as a mountain of private debt – in the US, equal to three times GDP – topples over into mass bankruptcy. The downward spiral would begin with further decay of financial systems and proceed via pervasive mistrust, the vanishing of credit, closure of vast numbers of businesses, soaring unemployment, tumbling commodity prices, cascading declines in asset prices and soaring repossessions. Globalisation would spread the catastrophe everywhere.”

He concludes that, “this would be a recipe… for xenophobia, nationalism and revolution.” Alarmed he says “Everything must be done to prevent the inescapable recession from turning into something worse… Deflation is a real danger.” With a further note of desperation, he states, “At stake could be the legitimacy of the open market economy itself… the danger remains huge and time is short.”

Wolf is no alarmist. He is a serious strategist of capital. Yet he can see the real catastrophe that faces the capitalist system and the dangers of revolution. However, he and his class are powerless to act. All he can suggest is tax cuts and the need to “sustain credit lines to those likely to remain solvent.” They are like their counter-parts in the 1930s, tobogganing to disaster with their eyes closed.

The working class must understand what is coming. They should take heed from the warnings of the serious strategists of capital. On the basis of capitalism there is a nightmare coming for working people. The working class must set itself the task of resolving the crisis in the interests of the majority, that is through the socialist revolution and the reorganisation of society on socialist lines.