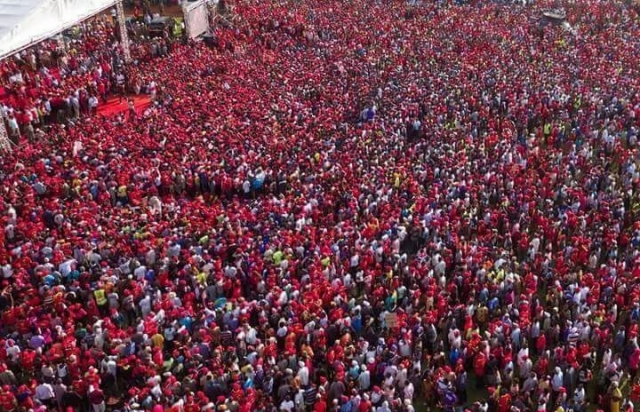 Over the last few days hundreds of thousands of people have returned to the streets of the West African country of Togo to protest against the brutal dictatorship of Faure Gnassingbé. This is a continuation of a mass revolutionary wave which have hit the entire region over the last period.

On Saturday, 19 August, the regime was shaken by the turnout of hundreds of thousands of people to the streets of the capital Lomé. The turnout also came as a shock for the Pan African National Party (PNP) opposition which had called for the protests over the issue of democratic reforms. "We are protesting against the arbitrary nature of governance and denial of freedom to assemble," said PNP leader Tikpi Atchadam. The PNP is demanding the reinstatement of the 1992 constitution which established a limit for the presidential term.

In Lomé hundreds of thousands of people, wearing red clothes, thronged the streets for kilometers. In the capital the police were simply overwhelmed by the sheer size of the crowds and melted away. For the most part of Saturday the protesters had complete control of Lomé.

In Sokode, 338 km north of the capital, the police panicked at the sight, size and militancy of the protests and opened fire on the protesters with live ammunition, killing seven and injuring 13. But instead of being cowed, the demonstrators retaliated. Youth charged the police directly, beat them up and took seven soldiers hostage. At least 12 soldiers were severely beaten up. This shows that the masses have lost their fear of the regime, which is a dangerous development for the future existence of the Gnassingbe dictatorship after 50 years in power.

Over the last two days the masses have shown their willingness to overthrow the dictatorship. But they have been left without a leadership, as the leaders of the PNP party are playing a disastrous role. Opposition leader Tikpi Atchadam called off the protests and called for an "end to violence"! This shows the complete cowardice of the opposition leadership. But it is not certain at all that this call will be heeded by the youth. The next few hours and days will be crucial.

The truth is that Togo's opposition leaders seem to be more afraid of the masses than they are of the dictatorship. The main opposition leader, Jean-Pierre Fabre of the National Alliance for Change, puts forward a very limited programme which is mainly focused on the issue of imposing limits to the presidential term in office. He has clearly established himself as official opposition leader, but he’s playing the role of loyal opposition to the regime in order to divert the genuine democratic demands of the masses into safe channels. However, the massive support even for this minimalistic demand of imposing limits to the presidential term actually shows the masses’ desire and determination to overthrow the dictatorship.

The problem is that Fabre is trying to introduce these reforms within the limits of the dictatorship. In 2015 he participated in elections "against" Faure Gnassingbe despite mass protests against these elections. The electoral system is tilted heavily in favour of Gnassingbé and his Union for the Republic (UNIR) party. The participation of Fabre in these sham elections despite a mass boycott clearly shows that his aim was actually that of legitimising the regime, rather than overthrowing it.

The rest of the leading figures of the opposition are showing similar shortcomings. After the 2010 presidential "elections" another opposition leader, Gilchrist Olympio, actually joined the government in a coalition after vehemently "opposing" the dictatorship of Gnassingbé in the run-up to the vote! This shows the treacherous and cowardly role of these opposition leaders. No wonder then that according to the Afrobarometer survey, 45 percent of Togolese say that the leaders of political parties are more concerned with advancing their own political ambitions than the interest of the people.

The weakness of the opposition is that it confines its demands to the question of presidential term limits, without exposing and challenging the power of the parasitic elites and their imperialist masters. While it is true that the oppressive nature of the dictatorial regime is becoming increasingly unbearable for the workers and youth of Togo, the roots of the mass protest upsurge lie in the widespread poverty, increasing inequality and the constant plundering of resources which could be used to satisfy the basic needs of the mass of the population.

The inevitable fall of the Gnassingbé regime will be the first step, but real emancipation cannot be achieved as long as capitalism and imperialism dominate the lives of the peoples in West Africa and in the rest of the continent. Mass poverty, crumbling infrastructure and imperialist exploitation are also affecting the lives of millions of people in countries with formal bourgeois democratic regimes. They are not caused by dictatorship, but by capitalism and colonialist plunder. These problems will not and cannot be resolved by substituting Gnassingbé with another president without destroying the system upon which exploitation and inequality are based. 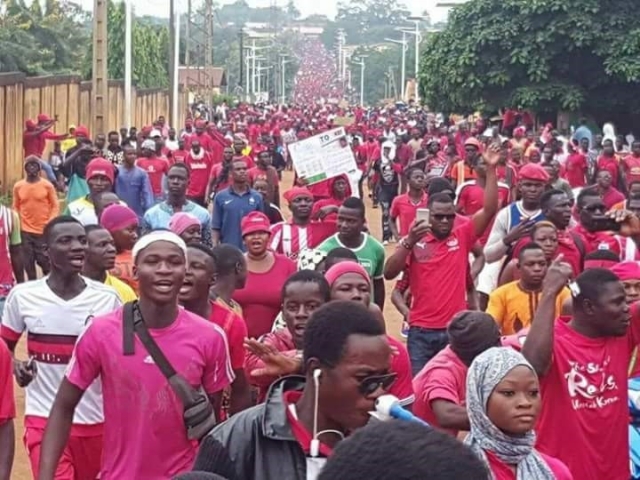 Faure Gnassingbé, who has just returned from the visiting Rwandan strongman Paul Kagame succeeded his father Eyadema in 2005. The Gnassingbé dynasty have ruled the country with an iron fist since 1967.

The death of Gnassingbé senior led to mass instability which threatened the very existence of the regime. The younger Gnassingbé had to tread carefully and started making cosmetic concessions to the opposition, mainly in the form of ‘’consultations’’ and ‘’dialogue’’, while he kept the reins of power firmly in his grasp. The opposition leaders want to negotiate their way to power sharing and “democracy” at a time when the regime is not prepared to give any substantial concession and is brutally cracking down on the protesters!

The current events in Togo are a continuation of the sweeping movement of mass protests which shook one regime after another in West Africa for the last five years. From Senegal and Gabon to the Ivory Coast, the revolutionary African masses have shown great courage in fighting against the local rulers and their imperialist puppet masters. In Burkina Faso the legacy of Thomas Sankara was reawakened by the October revolution of 2014. Nigeria, the most important country in the region, has also showed big developments which will have profound consequences for the entire region.

The experience of these movements will inevitably arm a new generation of revolutionary workers and youth with the understanding that there cannot be real emancipation without overthrowing capitalism and imperialist exploitation. Only by expropriating the wealth of the corrupt elites and the imperialists and by putting the productive forces at work in the interest of the majority of the population, could poverty be addressed and resolved.

The victory of a powerful revolutionary movement of the Togolese masses can achieve not only the end of the Gnassingbé regime, but will inspire the struggle for emancipation throughout the continent and pose a threat to capitalism and imperialist rule in Africa.