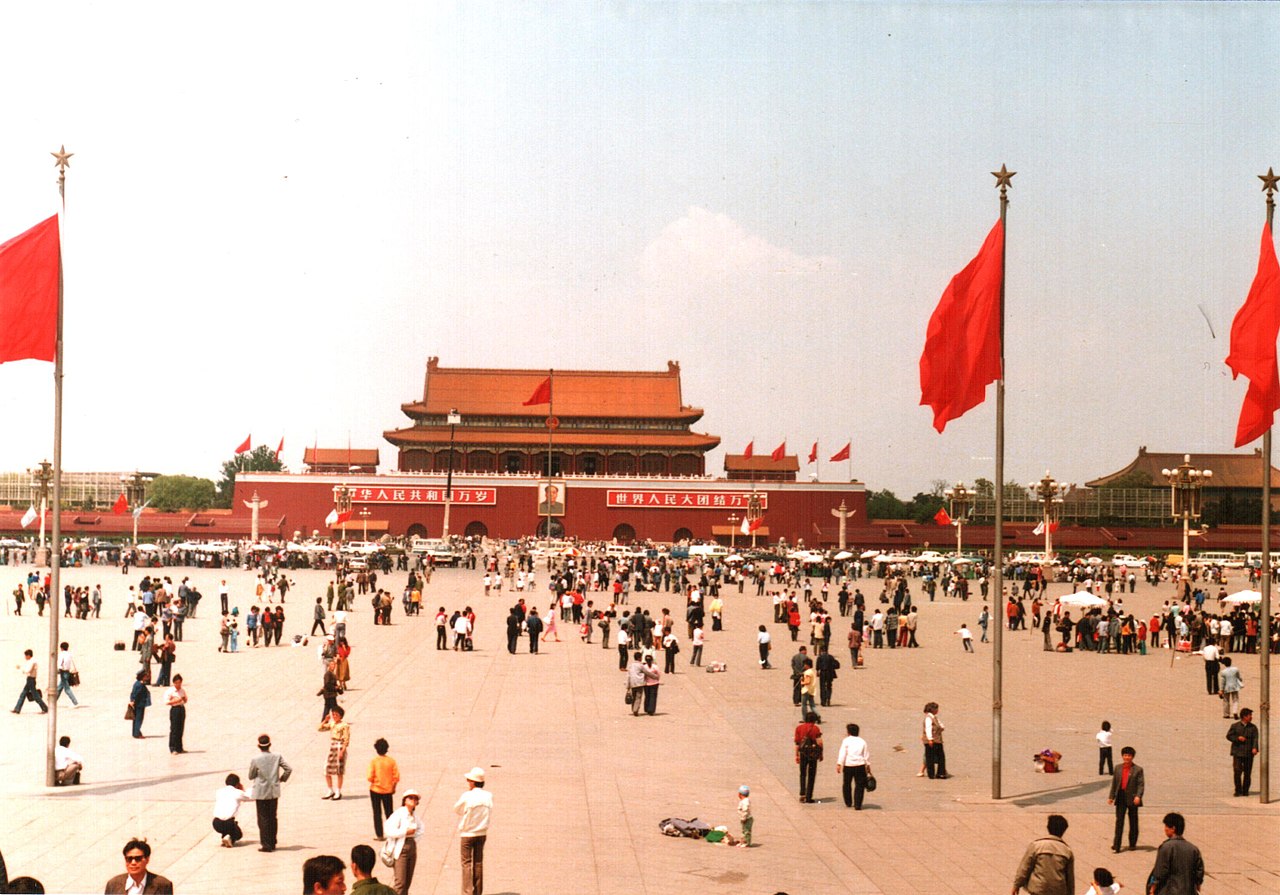 June 4th marks the 32nd anniversary of the brutal crushing of the Tiananmen Square movement in China in 1989. This year, like every year, we will no doubt see many bourgeois commentators producing articles that use the tragic events of 1989, not to explain what the movement was actually about, but to denounce “communism/socialism” as a failure. They will paint it as a system that cannot work, and present capitalism as the only viable system available to humanity. The media in the west present it as a movement for bourgeois parliamentary democracy and for capitalist restoration in China.

The fact remains, however, that the 1949 Chinese Revolution was one of the most important events of the 20th century, which provided a huge impetus to the development of China. Just as with the 1917 Russian Revolution, the rich and powerful in the world have done everything in their power to hide what these revolutions achieved for the workers and peasants: lifting hundreds of millions out of rural backwardness, removing the yoke of feudal landlords and freeing the two countries from imperialist domination.

The fact that the Russian Revolution was isolated in one country, however, led to the rise of a privileged bureaucracy and the monstrous regime of Stalin that extinguished the genuine workers’ democracy of the early years of the revolution. [For an analysis of this process one can read Trotsky’s excellent book, The Revolution Betrayed]. What we have to understand is that China in 1949 was not a copy of the 1917 October Revolution, modelling itself instead on the regime of Stalin. It was bureaucratically deformed from day one. The rise of Stalinism, with its despotic methods of rule, is used to bury the truth about what these revolutions really meant for the masses who participated in them.

Genuine Marxists are not interested in prettifying these regimes, but in uncovering the truth. In the case of China, this means that we reject the official interpretation of the 1989 events by the Chinese regime, which also has an interest in hiding what really happened. But we also reject the interpretation of the 1989 events presented by the western media.

The truth is that after the death of Mao and the rise of Deng Xiaoping, a policy of gradual market reform was adopted. This meant introducing elements of the market into the planned economy. It was this programme of gradual marketisation that created the conditions – one of them being very high levels of inflation – that would ignite the 1989 movement. The Chinese regime was shaken by mass youth protests which began in mid-April in Tiananmen Square and ended on 4 June when the government sent the army in to crush the youth, killing hundreds and possibly thousands.

We have to ask ourselves: was the movement against socialism and for capitalism? Or was it a movement that was instinctively moving in the direction of the struggle for the rights of workers and youth, for genuine socialism, with workers’ democracy instead of the rule of a bureaucratic elite?

The purpose of this reading guide is to help anyone who wants to really understand what happened in China in 1989 and why.

To begin with, Marxists understand that what existed in China in the past was not genuine socialism at all, but a terrible caricature with no workers’ control of industry, and no workers’ democracy in the running of society. Yes, capitalism had been eradicated by the 1949 revolution and a planned economy had been put in place. But power was in the hands of a privileged bureaucratic caste governing over society with dictatorial methods.

Such a regime could easily be used to discredit genuine Socialism in the eyes of workers and youth around the world. The capitalists in the west point the finger and say to workers and youth who are fighting for a better society, “You want revolution? This is what it leads to,” and they present capitalism as the best of all possible worlds.

The Chinese regime, on the other hand, also presented the 1989 movement as a pro-capitalist anti-Communist movement, presenting their own regime as if it were genuine Socialism. To this day, there are some on the Left in the west who present China as if it were a genuine Communist regime, refusing to both recognise that in the past the regime was Stalinist in its nature, and that it subsequently became a capitalist regime. These apologists of the regime refuse to recognise that there was anything positive in the 1989 events in Tiananmen, and portray the protestors as simply agents of US imperialism, manipulated by the CIA to overthrow the CCP from start to finish. The irony of this position is that it was the very same bureaucrats who crushed the Tiananmen Square movement who gradually introduced policies that were to lead to the restoration of capitalism in China.

As we can see, there was more to the Tiananmen protests than being simply for or against “Socialism”. The International Marxist Tendency has produced a wealth of articles analysing the events themselves and their significance in history. The following list includes articles that analyse the 1989 movement in China from a Marxist perspective.

The first article in this list, “China: from Revolution to Tiananmen” by Daniel Morley, provides important background information, explaining the nature of the regime that came into being in 1949, the pro-market policies it began to introduce in the 1980s, and how the effects of these policies created the discontent that would erupt into the 1989 Tiananmen Square movement.

It also analyses the positives and the negatives of the student movement, including the fact that there were indeed some layers who had illusions in capitalism – in fact, many of these went on to become de facto bourgeois liberal dissidents, some going into exile later and making nice academic careers for themselves in western universities.

One important element in the equation, however, was the role played by the working class, with the appearance on the scene of the Beijing Autonomous Workers Federation (BAWF). This was no pro-capitalist organisation, but a genuine expression of the Chinese workers in opposition to the market “reforms” promoted by Deng in that period, as these were increasing inequality and worsening working conditions.

In “What Occurred During the Spring and Summer of 1989 was in fact “Two Movements”” By Ji Han – an article we published because of the very interesting points it makes about the different trends that were present in Tiananmen Square at the time – we find an analysis of the layers leaning more towards liberal bourgeois democracy, that were indeed present, and also of the more proletarian elements who were instinctively moving not against “communism” but towards genuine socialism. This is something that is worth highlighting, as neither the Western commentators nor Chinese officialdom have any interest in bringing out this important element in the situation.

In fact, it was the movement that had started out as a student protest and then began to attract organised workers that eventually led the Deng regime to draw the conclusion that they needed to take harsh measures. That is when they brought the army in, with the clear intent of sending out a signal that such protests would be met with brute force. Subsequently, they tried to bury all memory of such a workers’ movement.

The Tiananmen movement also has important lessons for today. We have seen several movements, especially in South-East Asia, that have clearly been fuelled by the deep ferment that stems from the worldwide crisis of capitalism. These movements, however, have been characterised by the predominance within them of democratic demands, such as in Hong Kong and Thailand for example, which have allowed openly bourgeois liberal elements to emerge. This has allowed more openly reactionary trends to divert these movements away from the class struggle.

Back in 1989 it was precisely the openly pro-bourgeois elements who alienated the workers. They thought that fighting consistently for democracy meant looking to the Western bourgeois democratic regimes, such as those that exist in Europe or North America. Even in Myanmar today, where we have seen a movement of revolutionary proportions, there were widespread illusions that the Western “democracies” would come to their aid, an illusion that was very quickly dashed.

In a situation where world capitalism is in deep crisis, and every country is seeing growing poverty and unemployment, to limit movements simply to democratic demands means weakening them, for they have less appeal to the working class, the only force that can consistently fight for genuine democracy. These movements, which are invariably promoted by the youth – at least in the early stages – need to adopt a class outlook and understand that the struggle for consistent democracy cannot stop at mere democratic demands but must take up the burning issues facing working people. That means that the struggle for genuine democracy must become a struggle for the overthrow of capitalism and the establishment of workers’ democracy, i.e. socialism. If the scope of these movements remains limited, they end up failing to achieve even their democratic aims.

The youth can play a key role in opening the floodgates of revolution, but they must also adopt a class outlook. The task of Marxists when intervening in movements of this nature is thus to energetically support the progressive aspirations of the masses while firmly engaging in an ideological struggle with the reactionary elements. Back in 1989, this weakness was evident, at least among some layers, and it was precisely on this weakness that the bureaucracy was counting, as they could use it to depict the movement as a counter-revolutionary plot.

After having crushed the students and workers who had dared challenge the regime, however, the Chinese bureaucracy realised it had to tread carefully and therefore decided to slow down the pace of market reforms. But within two to three years they felt confident enough to continue with their programme. From the early 1990s onwards the transition towards capitalism accelerated, eventually leading to a position where the whole economy functions according to the laws of the market, all sponsored and backed up by the state.

Our analysis of that process is made available here in “China’s Long March to Capitalism - Part 2” and also in the relevant chapter from China: From Permanent Revolution to Counterrevolution By John Peter Roberts, “China Marches Back to Capitalism”. We provide the facts and figures from a process that can be traced back to the first tentative steps in 1978 – which started out as market stimuli within an overall planned economy, eventually leading up to the 2000s when capitalist methods became dominant. The same bureaucrats, who accused the Tiananmen movement of being pro-western, pro-capitalist and anti-communist, were in fact the greatest danger to the planned economy. This can be explained by the fact that, in spite of all the rhetoric about the “people” and “socialist construction”, the bureaucrats at the top were not content with being a privileged bureaucratic elite, but desired ownership and the right to pass on their wealth to their offspring. These texts are essential reading to understand what China is today, and also what it is not.

China: from Revolution to Tiananmen By Daniel Morley

The Role of the Student Movement

The Call of Democracy: fellow students, do you know what June 4th represents? By Hsiao Yu

The Role of the Workers

Restoration of Capitalism in China

China Marches Back to Capitalism, from China: From Permanent Revolution to Counterrevolution By John Peter Roberts