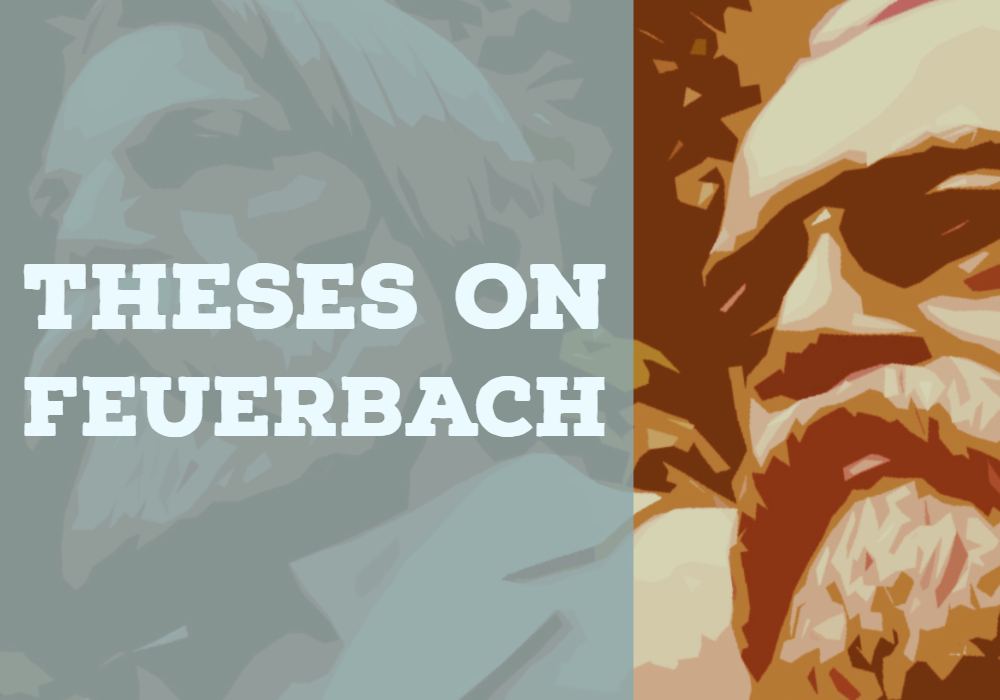 With Marx philosophy finally emerges out of the dark and airless cellar to which it was confined for centuries by scholastic thought and dragged out, blinking, into the light of day. Here at last thought is united with activity – not the one-sided purely intellectual activity of the scholar but real, sensuous human activity. See also Alan Woods' introduction to this classic Marx’s revolution in philosophy - Reflections on the Theses on Feuerbach.

The chief defect of all hitherto existing materialism (that of Feuerbach included) is that the thing, reality, sensuousness, is conceived only in the form of the object or of contemplation, but not as sensuous human activity, practice, not subjectively. Hence, in contradistinction to materialism, the active side was developed abstractly by idealism -- which, of course, does not know real, sensuous activity as such. Feuerbach wants sensuous objects, really distinct from the thought objects, but he does not conceive human activity itself as objective activity. Hence, in "Das Wesen des Christenthums", he regards the theoretical attitude as the only genuinely human attitude, while practice is conceived and fixed only in its dirty-judaical manifestation. Hence he does not grasp the significance of "revolutionary", of "practical-critical", activity.

The question whether objective truth can be attributed to human thinking is not a question of theory but is a practical question. Man must prove the truth -- i.e. the reality and power, the this-sidedness of his thinking in practice. The dispute over the reality or non-reality of thinking that is isolated from practice is a purely scholastic question.

Feuerbach starts out from the fact of religious self-alienation, of the duplication of the world into a religious world and a secular one. His work consists in resolving the religious world into its secular basis. But that the secular basis detaches itself from itself and establishes itself as an independent realm in the clouds can only be explained by the cleavages and self-contradictions within this secular basis. The latter must, therefore, in itself be both understood in its contradiction and revolutionized in practice. Thus, for instance, after the earthly family is discovered to be the secret of the holy family, the former must then itself be destroyed in theory and in practice.

Feuerbach, not satisfied with abstract thinking, wants contemplation; but he does not conceive sensuousness as practical, human-sensuous activity.

Feuerbach resolves the religious essence into the human essence. But the human essence is no abstraction inherent in each single individual. In its reality it is the ensemble of the social relations. Feuerbach, who does not enter upon a criticism of this real essence, is consequently compelled:

Feuerbach, consequently, does not see that the "religious sentiment" is itself a social product, and that the abstract individual whom he analyses belongs to a particular form of society.

All social life is essentially practical. All mysteries which lead theory to mysticism find their rational solution in human practice and in the comprehension of this practice.

The highest point reached by contemplative materialism, that is, materialism which does not comprehend sensuousness as practical activity, is contemplation of single individuals and of civil society.

The philosophers have only interpreted the world, in various ways; the point is to change it.