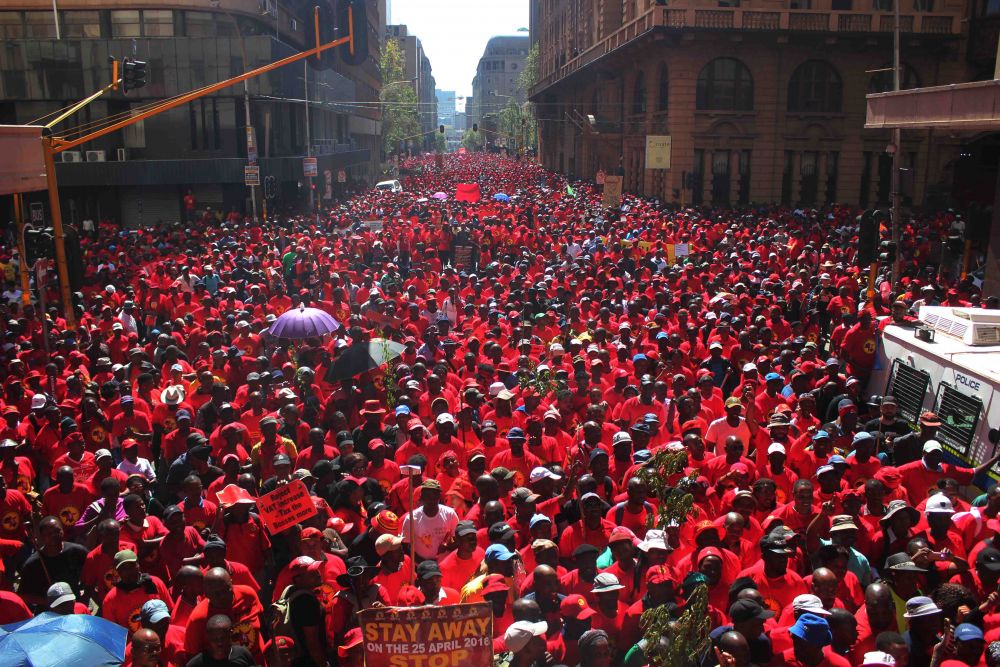 SAFTU’s general strike on Wednesday was a serious warning to the government and the capitalist class. It was part of a sharp intensification of industrial action by workers in big sectors of the economy. The attacks on the working class are preparing a backlash and an upsurge of the class struggle.

The increasing radicalisation of the working class was shown on Wednesday when the 800,000-strong trade union federation embarked on its first national strike since it was formed, exactly one year ago. The strike hit all sectors of the economy and disrupted public transport severely. Some sectors like manufacturing, where NUMSA is particularly well-organised, were shut down. It was organised in the big cities and brought the the main economic centres to a standstill.

Workers were protesting against some of the biggest attacks against the labour movement in decades. These include proposed amendments to labour laws, currently before parliament, which seek to severely curtail the right to strike by introducing secret balloting by unions; introducing technical and procedural measures that employers could use to interdict strike action and introducing a minimum wage, which will in effect entrench and legitimise extremely low wages in many sectors of the economy. The unions are fighting to keep companies and the state out of their internal democratic affairs and to introduce a living wage of 12,500 rand. 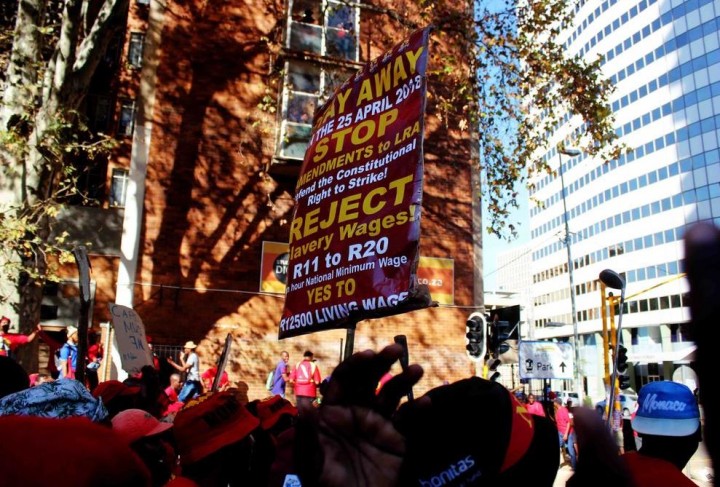 Workers were striking over some of the biggest attacks against the labour movement in decades / Image: SAFTU

According to the National Association of Automobile Manufacturers of South Africa, almost all the country’s automotive plants were shut down. These include companies such as BMW AG, Ford Motor Co. and Toyota Motor Corp.

Public transport was also severely affected. Bus drivers had been on strike since a few days before Wednesday’s strike. This put pressure on other modes of transport such as trains and taxis. Under the impact of the strike, the stress on the train infrastructure caused a major breakdown of the system in Cape Town. This brought massive pressure on the roads. The result was that a city of 4 million people came to a virtual standstill. On top of this, the general strike on Wednesday further hit the public transport because tens-of-thousands of workers used the trains to go to their respective routes for the marches. The result was a major disruption to the economy. The bus drivers’ strike is still ongoing and is crippling public transport in all the major cities. The unions, which include NUMSA and Satawu, are demanding a 12 percent wage increase and better terms and conditions.

Proposed wages are an insult

In Kwazulu-Natal all of the regions of SAFTU converged on Durban. The Durban Chamber of Commerce and Industry reported severe disruptions to business, especially a huge impact the manufacturing sector. Thousands of workers marched from King Dinuzulu Park to the Durban City Hall. Durban hosts some of the country’s largest manufacturers. It also has one of the biggest and busiest harbours in the Southern hemisphere. The strike therefore had a big impact on the economy, not just of Durban but the entire country.

In Cape Town, thousands of workers marched from Keizersgracht Street to the Civic Centre and Parliament. The city centre came to a standstill when workers descended on parliament. The mood was very militant. “I have two kids who are going to tertiary level [education] next year. Where am I going to get the money?” said a worker from Khayelitsha.

In Nelson Mandela Bay, which is the heart of the vehicle manufacturing sector, the entire industry came to a standstill. Addressing the workers, Numsa president Andrew Chirwa said the R20 an hour minimum wage was unacceptable.

“People who are propagating that wage are themselves swimming in riches. They don’t know what R20 is worth. Our government has decided to legalise poverty by introducing a wage of R20 an hour. The employers want to give power to the Minister of Labour to allow or ban strikes. They want to force all of us to vote before a strike and the ballot will be supervised by the Department of Labour — the same department that is not helping workers. Workers are dying of maltreatment but the Department of Labour is doing nothing to stop it. Those who sit in government offices making laws against workers are our enemies.”

“The new dawn is R20 per hour, the new dawn is 15 percent VAT, the new dawn is that the right to strike will be taken away. Those who are confused about December [where ruling ANC elected a new president], there is no new dawn. This is the same wine in different packaging.

"Any collective bargaining without a right to strike is not bargaining. We have no weapon against the bosses. We have no guns against the bosses, we have nothing except the power to withdraw our labour. When you take that power away you are making us vulnerable to the already ruthless bosses who are sitting in boardrooms plotting how to exploit us better and how to keep our wages as low as possible."

The biggest movement was in Gauteng province, the economic heart of the country. In Johannesburg, workers gathered at the Newtown precinct and marched to the Premier’s office, and the offices of the Department of Labour and the Gauteng Department of Social Development. Unions included the NUMSA, the General Industrial Workers Union of South Africa (GIWUSA), the National Union Of Public Service and Allied Workers (NUPSAW), the South African Liberated Public Sector Workers’ Union (SALIPSWU), the Information Communication and Technology Union (ICTU) and Simunye Workers Forum.

Most of the anger was directed at the billionaire president, Cyril Ramaphosa. Workers carried placards, saying “ Voetsek R20, voetsek Mr Buffalo.” Others had posters showing Ramaphosa with buffalo horns‚ with the text "Cyril Buffalo is R20 p/h”. Another big poster depicted Ramaphosa with dripping blood from his mouth‚ with the words “bloody agent”. Other workers shouted "take the R20 and shove it under the tail of a buffalo". 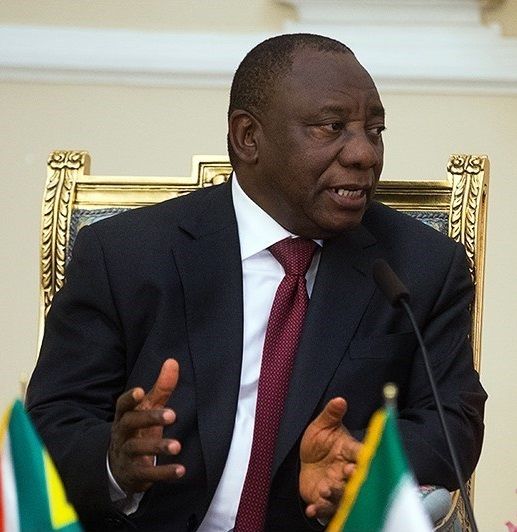 A huge amount of anger was directed towards Cyril Ramaphosa / Image: Erfan Kouchari

Voetsek is a really strong word to tell someone off and the buffalo refers to the infamous incident when Ramaphosa was prepared to bid 18 million rand for a prize buffalo. In this creative way the workers were highlighting the class difference. where the same obscenely wealthy president is now prescribing a minimum wage of 20 rand per hour.

These chants, slogans and posters show us the real anger that exists among workers. Here are workers fighting for a living wage, while the government is brutally attacking the working class by introducing cuts and raising taxes on the poor. At the same time the ruling class is preparing legislation that will severely curtail the right to strike. This is causing mass anger and is rapidly radicalising many layers of the working class.

The strike on Wednesday is only one indicator of an upswing in the class struggle on the industrial front. In addition to the ongoing bus drivers’ strike there is also a big strike over bonuses and working conditions by healthcare workers. This strike has paralysed the entire North West province. The workers also demand the removal of North West premier Supra Mahumapelo, who has been deeply embroiled in corruption scandals. Since last Wednesday the situation has escalated into a full-blown uprising against the premier. It became so serious that Ramaphosa had to cut short his visit to London to return to South Africa.

A big success, but the battle goes on 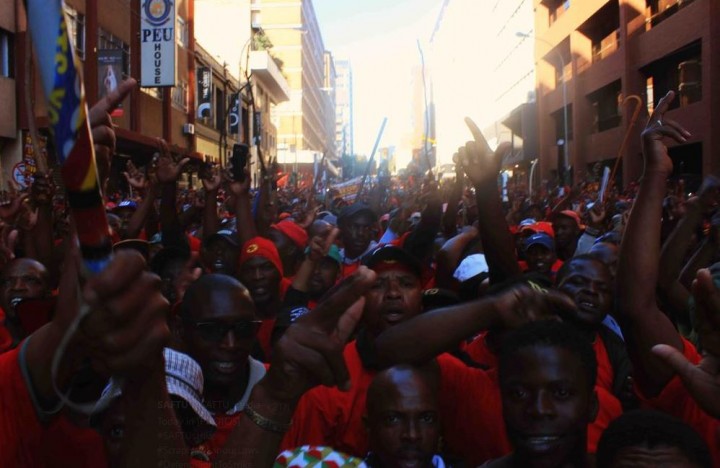 The working class needs a party of its own: a party fighting for socialism / Image: SAFTU

The SAFTU general strike was clearly a big success. The federation has proved it has the ability to bring out large sections of the working class. This is an important start. The strike has also revealed the anger of the workers. But it is important to build on this. A one-day general strike gives a serious warning to the ruling class. It also gives the workers a sense of their collective power. But a one day strike will not stop the attacks. The task is to build a strong campaign which will build on the momentum created. This battle will not be won in the parliament’s portfolio committee, but on the streets. It is therefore necessary to prepare to escalate the strike action. This could include calling a 48-hour general strike, while preparing for an open-ended general strike if the demands are not met.

But not even this will be enough. The right to strike was won by the working class in struggle. But under capitalism all advances by the workers are only temporary. The capitalist system in South Africa is in deep crisis. This is causing mass anger among the working class. The ruling class knows that the class collaborationist trade union leaders, such as those in the biggest federation COSATU, will not be able to hold the workers back once the anger of the workers boils over. Therefore, they are preparing the way for unelected officials, commissioners and judges to have a greater say in internal union affairs. This is what is behind these attacks. The capitalists cannot allow healthy trade union democracy at a stage when the class struggle is rising sharply because they are afraid that the workers will kick out the cowardly right-wing leaders and replace them with more militant ones. But ultimately these attacks show that the working class needs a party of its own: a party fighting for socialism.