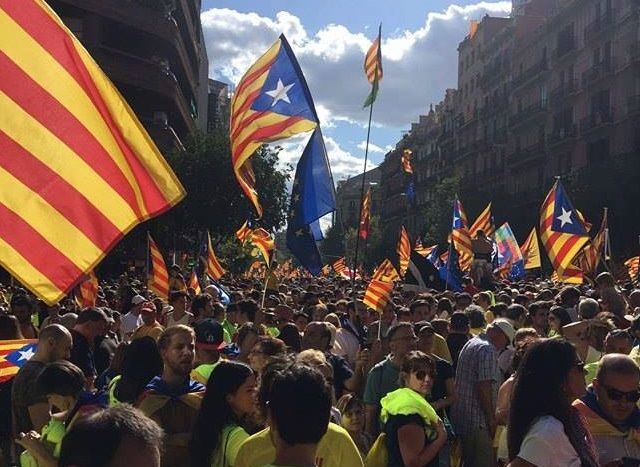 11 September, the national holiday of Catalonia, saw a round of mass protests and rallies for the right to self-determination of Catalonia and against the banning of the referendum by the central government. In the morning, there were several gatherings by various political parties. In the afternoon, there was a huge pro-independence demonstration, which according to the police, was attended by one million people. In the evening, a mass rally was held by the radical left, pro-independence Popular Unity Candidacy (CUP), under the slogan of “self-determination: independence, socialism, feminism”.

The day of struggle took place only a few days after the Constitutional Court banned the coming Catalan independence referendum. Since then, the Civil Guard, a military force which carries out police duties, has carried out raids against media and businesses that are allegedly helping prepare the vote. An atmosphere of hysteria against the Catalan government is also being whipped up by the Spanish media. All sorts of threats are being bandied around by the central government and its fellow travellers, the judiciary, and the police. They are threatening to arrest the mayors that collaborate with the referendum, to close down websites and media that promote it, or to fine and prosecute the volunteers that will organise the ballot. Repression is not only being stepped up in Catalonia; in Madrid a meeting in favour of the right to self-determination was prohibited by a right-wing judge under the exhortations of the Madrid branch of the conservative Popular Party (PP). It is worth noting that the central government has the seal of approval of international imperialism and of the EU. The EU has repeatedly stated that it stands by “legality”, that is, by the raids of the Civil Guard, the sanctions and arrests of volunteers and mayors, and the requisition of ballot boxes. The mood is understandably fraught. The oppressive, anti-democratic character of the Spanish state and its Francoist marrow, and more generally the farcical character of bourgeois democracy, is being revealed before the eyes of millions. The Catalan question can clearly not be resolved within the bounds of the Spanish bourgeois state.

The movement for independence has a cross-class, heterogeneous character, but it is currently led by cynical, petty bourgeois politicians, headed by right-winger Puigdemont. The Catalan government's base of support and its activist core is to a great degree composed of middle class, small town people, who hardly make a stable basis for a durable, successful struggle against the Spanish state. Illustratively, the sea of Catalan flags in the main demonstration on 11 September was peppered with EU flags. At the same time though, despite its illusions, prejudices, and confusions, and despite the presence of regressive, narrow-minded attitudes among some layers, it is a left-leaning mass movement that aspires towards the creation of a some sort of socially-advanced Catalan republic as a reaction against the rottenness of old Spain, under the banners of the ERC, the Catalan Republican Left, the most popular force in the movement.

At the same time, the tendency represented by the CUP, which has an important echo among many young people (whereas the average age in the Podemos and in the central march was about 50 or even 60, in the CUP rally it must have been 22 or so), is much further to the left, at least verbally, than any other political force in Spain. On 11 September, its keynote speaker, firebrand Member of Catalan Parliament Anna Gabriel, started by quoting Marx with "the workers have no country" and spoke of the need of combining the battle for self-determination with the struggle for socialism. She also affirming that no real self-determination is possible under capitalism, and spoke of the need to win over the working class with an anti-capitalist programme. She making honest self-criticism about their support for the budget of the Catalan government, but also criticising Podemos for not supporting self-determination consistently. She urged Podemos leader, Pablo Iglesias to seize this opportunity to deliver a blow to the PP and to the Francoist state apparatus. The rally ended with a rendering of the Internationale by the approximately 12,000 people that attended - a very powerful experience, and a very significant gesture.

Truth be told, the Spanish left, and namely Podemos, have regrettably helped give strength to the Catalan bourgeois nationalists. They have done so by refusing to support a unilateral referendum and have thereby given a pretext to the ERC and, by extension, to the CUP, to join a cross-class front with the reactionary PDeCAT - a bloc that has understandably repelled an important sector of the working class of Catalonia. This sector could otherwise have been won over to the conquest of Catalonia's democratic rights by giving the struggle a progressive, class character against austerity, corruption, inequality, and for social justice which sees the creation of the Catalan republic as the first step towards a Spanish republic. This position has also produced a bitter debate inside Podemos itself, with its Catalan section, which supports the referendum, clashing with the national leadership and with Barcelona's left-wing mayor Ada Colau. In the morning of 11 September, they organised separate rallies in different parts of the city, and the secretary of Podemos in Catalonia overtly attacked the national leadership for their "embarrassing" capitulation over their initial promises to offer a bold, democratic solution to the Catalan question.

The movement for self-determination undoubtedly has a demagogic, self-interested, and cowardly leadership, which leans heavily on the petty bourgeois and small-town masses. As things stand, however, it could have revolutionary implications. Millions of people are determined to vote on their relationship with Spain, and the Catalan government has promised a vote. This puts them on a collision course with the brutal repressive apparatus of the Spanish state. It is possible that the nationalist bloc will back off before the first serious battle has begun and that the referendum will not happen. Although it must be said that the PDeCAT, the traditional party of the Catalan capitalists, is leaning more and more on the radicalised petty bourgeoisie, and its leadership is concerned above all with its own political survival, going further than we could have imagined.

Whether the referendum will happen and in what conditions, will depend on the level of repression by the Spanish state (and by the subtler pressures of the big Catalan capitalists) on the one hand, and by the degree of mass mobilisation in favour of the referendum on the other. This in turn is conditioned both on the provocations of the Spanish state, and by the political appeal of its leadership and by the type of political rhetoric that surrounds it. The leaders of the Catalan government have shrewdly made the battle for a republic their central slogan, giving the movement a more progressive allure. Ultimately however, in the unlikely scenario the referendum was held, and if independence won, secession means a head-on struggle for national liberation against the Spanish state. It seems impossible that a bourgeois like Puigdemont will ever embark on such an endeavour. The way to unlock the situation, to give the referendum a mass base in Cataloniam, to raise its appeal in the rest of Spain and to ensure that it will be carried through to the end (i.e., through revolutionary means), is on the basis of the unity of the left, of Podemos and its allies, the CUP, and ERC; and on the basis of making a progressive Catalan republic a springboard for the revolution in all of Spain. For this, it is necessary for Podemos to shake off its trust in the legality of the Spanish state and in bourgeois democracy, and to stand unconditionally for self-determination. It is also necessary for the ERC and the CUP to abandon their faith in the bourgeois PDeCAT and reject “patriotic” class-collaborationism.