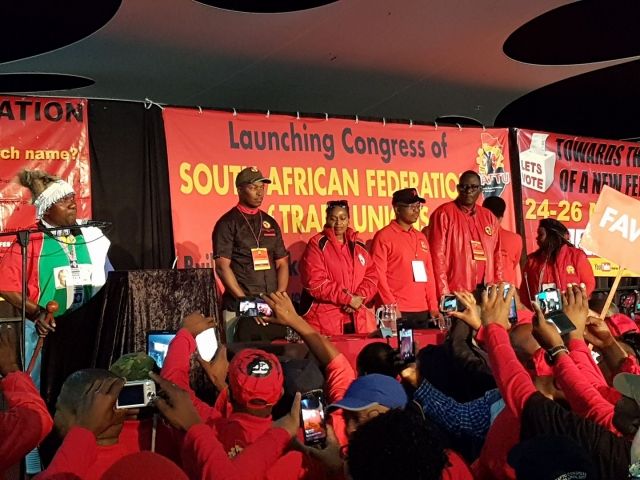 Over the weekend of the 21-23 of April, 1384 delegates from 24 unions gathered in Boksburg for the founding congress of the South African Federation of Trade Unions (SAFTU). The launch of South Africa’s second biggest labour federation comes at a time of heightened political tensions and could be a decisive event for the labour movement.

Over three days the delegates, representing 700,000 workers from all sectors of the economy had many discussions about the state of the trade union movement. The mood at the congress was militant, vibrant and festive as the federation unveiled its constitution, agenda and principles. “This is only the beginning of a long journey to unite South African workers and to end the fragmentation of the trade union movement,” the new General Secretary Vavi told the congress.

Vavi and the National Union of Metalworkers of South Africa (NUMSA) were at the forefront of the formation of SAFTU. The idea of a new trade union federation was first raised in 2015 by a group of trade unions who advocated for a “worker controlled” federation which was “not aligned with any political party”. This followed the expulsion of Vavi and NUMSA from the Congress of South African Trade Unions (COSATU). NUMSA was COSATU’s largest union with over 350,000 members. Another big COSATU union, the Food and Allied Workers’ Union (FAWU) subsequently also left COSATU and is now a SAFTU affiliate. 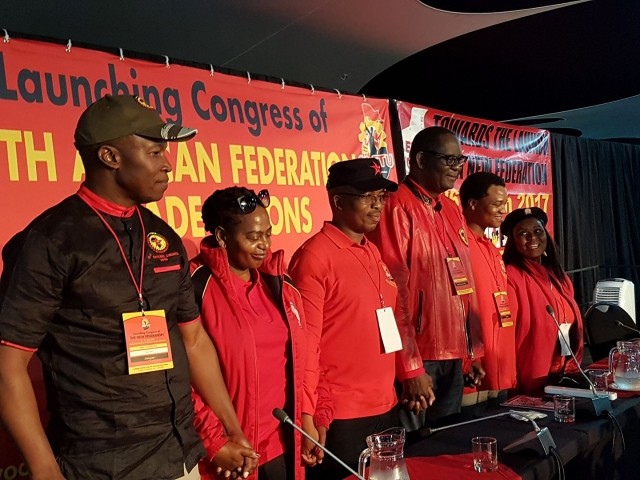 At the congress, delegates raised issues including women’s representation and the importance of internal democratic structures. Up until the launch of the federation, the process was driven by a steering committee. But the congress, scrapped the committee at the demand of the congress. A NUMSA delegate gave the reason for this: “One of the most important principles is the issue of workers’ democracy. At all times, decisions should be made by workers, not by small committees.”

The final declaration of the congress is a very radical document calling for the of nationalisation not only of the mineral wealth of society, but also the financial institutions. It concludes that the crisis in society cannot be solved under Capitalism:

“The federation will oppose any attempt to resolve this crisis within the parameters of a capitalist system which has proved that it has no solutions. It is the working class who produce the country’s wealth and who are the main consumers of its commodities.

The only way out of the crisis has to be through a mass movement of the working-class based on a program guided by the principles of Marxism-Leninism for the nationalisation of the mineral and manufacturing monopolies, the banks and the land, in line with the aspiration expressed in the Freedom Charter.”

The congress further states its principles which includes, independence from employers and political parties, workers’ control, non-racialism and non-sexism, internationalism, and socialism:

“Our historic mission is to rapidly build a united mass force of workers, which will transform their lives and pave the way for the transformation of society as a whole from one based on the greed of a rapacious capitalist elite to one run for the benefit of the working class and all the people of South Africa and the world.”

The formation of SAFTU has been on the cards ever since the country’s biggest union, NUMSA was expelled from COSATU in 2014. This expulsion of the metal workers by the COSATU right-wing was backed by the SACP and some in the ANC. The main reason was that NUMSA, having become a focal point for the radical mood of the workers, was moving sharply to the left and was coming into sharp conflict with the interests of the ruling class. This militant stance by NUMSA, against the capitalist policies of the ANC government became a serious threat to Capitalism. Just like the expulsion of some of the leaders of the ANC Youth League in 2012, the expulsion of NUMSA from COSATU showed the disintegration of the liberation movement along class lines. The formation of a new trade union federation independent from the class interests of the capitalists and the petit bourgeois leaders of the ANC is a step forward for the working class.

SAFTU is the country’s fourth labour federation alongside COSATU, FEDUSA and NACTU. Many of the SAFTU unions were formed on this basis big splits developing within the old federations, in particular from within COSATU, which has increasingly drifted towards becoming a toothless tool for the upper echelons of the ANC. This situation has led to many wrong and pessimistic conclusions on the part of the left about the state of working class, including the perception that the working class is too atomised and that the labour movement is in retreat. However this is a fundamentally incorrect conclusion to make.

What these conclusions do not take into account, is the character of the class struggle over last period and how this has transformed the political landscape. The sharp rise in the class struggle between 2009 to 2013 battered the whole political landscape. The big rise in strikes, wildcat strikes, protests, and demonstrations has transformed the political situation. The turning point was the Marikana massacre which saw the ANC responsible for apartheid era atrocities against poor black workers on strike. The capitalist policies carried out by the ANC and the militant response by the workers resulted in the former mass liberation movement beginning to fracture along class lines.

Huge class contradictions have since emerged between the ANC leadership which has the joined the ranks of the ruling class, and the working class masses that supported it for decades. The crisis in the Tripartite Alliance, the splits in the trade union movement, the emergence of forces to the left to the ANC, as well as a number of community based organisations, are products of this process. The result is that the whole situation is in flux, including the unions.

What many on the left therefore see as a retreat is really a period of political realignment and repositioning of the working class in relation to their organisations.The workers are evaluating the situation and are drawing conclusions. Generally those organisations of the working class which did not reflect, the mood of the workers are going into crisis. This is generally the situation all the way from within the majority of COSATU unions to the ANC and the government itself. In such a situation, the formation of a militant and politically independent labour federation, led by NUMSA could therefore be a watershed moment.

We can already see the outline of further crises and splits in the class collaboration leadership of COSATU and FEDUSA. The fallout in COSATU between its president, Sdumo Dlamini and some of the affiliates of the federation is an anticipation of further splits to come. Dlamini defied a CEC resolution to call for president Zuma’s resignation by attending Zuma’s birthday party and pledge his support to Zuma! This has prompted some affiliates from COSATU to call for a vote of no confidence in Dlamini. This is only an anticipation of still future crises in COSATU. With many unions having their roots in COSATU, SAFTU could act as an attraction for many disgruntled COSATU affiliates.

On the other hand, FEDUSA, whose leadership have been travelling with the Treasury and big business as “Team South Africa” to “promote the country to investors”, is feeling the heat from the launch of SAFTU. Incredibly it now wants to sue the new federation because they somehow see a similarity between the names SAFTU and FEDUSA! This is of course a ridiculous and scandalous position but underneath it displays the anxiety of the right-wing leaders at the prospect of a militant left-wing federation. In the final analysis, there is not enough room for four labour federations in South Africa. The further crises in COSATU and FEDUSA and the rise of SAFTU could therefore lead to a radical realignment of the labour movement.

The current situation is very similar to those of the beginning of the revolutionary storm of the 1980s and is likely to have similar results. The most important factor in this equation is the working class - when they move decisively, their movement can fundamentally transform the whole situation. The new development of the formation of a mass labour movement comes at a time of political upheaval, when there is a general mood of anger above and beneath the surface of South African society. The pressures of decades of frustration and rage are building up to a critical point. This pressure needs an outlet and will find it one way or the other. The launch of SAFTU reflects the need of the working class for its own fighting organisations. The conditions for this could not be more favourable.

The tasks of the leaders of the federation is now to put action behind their words, to begin a real campaign amongst the South African workers, to win them over to its Socialist programme and to take over the commanding heights of the economy under the democratic control of the working class.