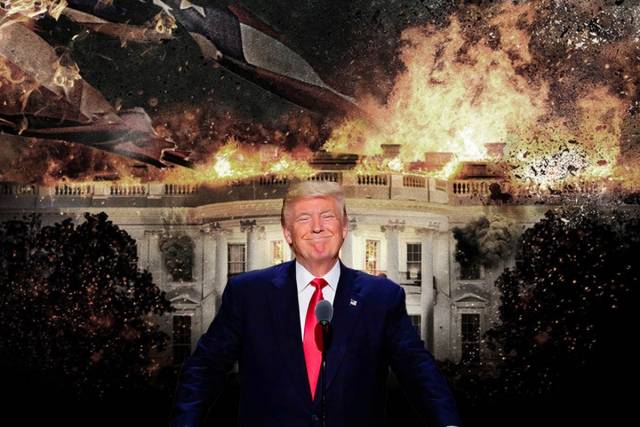 In certain conditions, all things can turn into their opposite. Prior to the arrival of its latest resident, the White House had long been a symbol of the immense stability and confidence of the USA’s political regime. Today it stands at the centre of an almighty political crisis.

Forced by the logic of his position, President Trump lurches like a drunk from scandal to scandal, but with each fresh controversy he exposes and deepens the fissures within American society, paving the way for a social crisis of even greater dimensions.

From Russia with love

The figure of Vladimir Putin looms large over the increasingly acrimonious split within the state apparatus as the row over alleged links between Trump’s election campaign and Russian officials has continued to escalate. Trump’s National Security Advisor, Michael Flynn, was dismissed last month having lied about his discussions with the Russian ambassador prior to taking office. Trump’s appointed Attorney-General, Jeff Sessions, has also had to recuse himself from the ongoing investigation with the Trump campaign’s ties to the Kremlin. Now Trump himself is in the spotlight, having lied about meeting the Russian ambassador during his election campaign.

That the President of the United States is currently under investigation by his own secret services for suspected links to a hostile foreign power would, in normal times, be considered a major scandal. But these are far from normal times. Rather, it has been Trump’s response to these allegations which has been the biggest source of controversy. In a string of tweets sent on 4 March, Trump accused Barack Obama and the FBI of “wire tapping” his phones in Trump Tower prior to the election, adding references to “McCarthyism!” and “Nixon/Watergate” into the bargain.

These allegations have unsurprisingly only inflamed an already sensitive situation. In a piece entitled, “Trump is straining the system of government”, The Financial Times put it succinctly: “Mr Trump’s statements are the most extreme evidence yet that he is in more or less open conflict with all of the institutions of the US government save the military — from the intelligence services, to the state department and much of the rest of the civil service. Whether a system designed to require co-operation can work under these conditions remains to be seen.”

The state is on a collision course with its own President. Any hopes that Trump would moderate his rhetoric and behaviour post-election (as suggested by his victory speech) have been dashed. Instead, he responds to every threat with a new outburst. Instability is piled on instability. This incredibly tense stand-off between the state’s elected and unelected arms cannot last permanently; it must be resolved one way or another. But nothing can repair the immense damage this split is inflicting, and will continue to have, on the perceived integrity of the state as a whole. Indeed, a Republican Senator, Ben Sasse, has described the situation as a “civilisation-warping crisis of public trust”.

Every attempt by the so-called “deep state” to safeguard the stability of the present system only serves to expose its own role, ultimately weakening both sides. It is this fact, and its potential effect on the American masses, which presents the most serious problem for the American ruling class. As The Financial Times notes in the aforementioned article, “the claims can only have a corrosive effect on trust in the institutions of government, without which the country [read: capitalism] cannot function.”

The state apparatus is not the only institution to have been drawn into an ugly conflict with the President. The current war of attrition between Trump and most of the mainstream media will cause yet another headache for the American ruling class. During his bombastic if bizarre press conference on 16 February, Trump dismissed stories regarding his links with Russia as “fake news”, an expression which peppered his rambling introductory remarks. When asked if he was concerned that he may be undermining people’s faith in the freedom of the press by branding all negative coverage “fake news”, Trump’s response was simply, “I do that.”

His ability to shrug off scandals which in the past could have ended political careers has been poured over by a host of commentators and experts who allude to a new “post-truth” era, and cite all manner of cunning media strategies and conspiracy theories surrounding the “mastermind”, Putin. But in reality, Trump is as much a product as a cause of the present crisis.

Americans’ faith in the media has been in steady decline for over a decade. According to a Gallup poll released in September 2016, before the election, only 32% of people polled said they had a “great deal” or a “fair” amount of trust in the media, the lowest score since the poll began in 1972. Although the level of trust fell across all groups, the most marked falls could be found amongst Republicans and, more significantly, 18 to 49 year olds. It is this systemic crisis of public confidence which allowed Trump to ride, seemingly unharmed, over the tidal wave of hostile coverage which met his candidature. And it is precisely this crisis which is driving the present impasse for the media.

In reality the so-called “post-truth” age represents the rejection of the usually distorted and sometimes outright false coverage which characterises the “free press” of all nations. When Trump announces, “Unfortunately, much of the media in Washington, D.C., along with New York, Los Angeles in particular, speaks not for the people, but for the special interests and for those profiting off a very, very obviously broken system”, he taps directly into this seething anger and resentment. It is this which makes him seem so untouchable.

However, unfortunately for Trump, “facts are obstinate things”, as Lenin once said. Trump has no answer to the world economic crisis; he can only offer tax cuts to corporations and the threat of tariffs on foreign goods, a recipe for future disaster. In the meantime, his Executive Orders, such as the “Muslim Ban” and his direction to begin building the Mexican border wall only serve to aggravate the already febrile public mood. Trump will eventually find himself under attack not only from the discredited establishment media but even his own base, dissatisfied with his inability to make good on his ridiculous boasts. In such turmoil, a genuine alternative to the madness and corruption of this system could be rapidly built. But the question is, how?

We have entered into a period in which all over the world age-old, powerful institutions are tumbling into crisis as the underlying contradictions of capitalism cause huge splits in the existing order. The ruling class is no longer able to rule in the same way; a fact which carries with it profoundly revolutionary implications. Trump is the personification of the dead-end of American “democracy” and of the “lesser-evilism” of the deservedly discredited Democrats.

Already, for all his bravado and the Republicans’ control of Congress, Trump has as little control over the situation as his opponents. It is not Trump and his policies which strike terror into the American bourgeois, it is the reaction of the masses, which was hinted at in the massive Women’s March in January. With the Democrats, the “graveyard of social movements”, currently in disarray it is by no means certain that such a movement could be diverted along the usual ‘safe’ channels.

The giant American working class could sweep away Trump, the Alt-Right and the whole rotten establishment with ease, but it will never do so as long as it is tied to the coat-tails of Liberalism and imperialism. The struggle against Trump marks a new movement which could lay the basis for a whole new society. This movement needs a new party! Organised around a socialist program in every neighbourhood, factory and campus, the millions who reject this rotten system can change America and with it the world. In this the workers of America will have support of the International Marxist Tendency in the USA, the UK, and beyond.

For a mass Socialist Party in the USA!